Are Jellyfish and Lobsters Biologically Immortal?

Some jellyfish do meet the definition of biologic immortality, but lobsters do not make the cut. 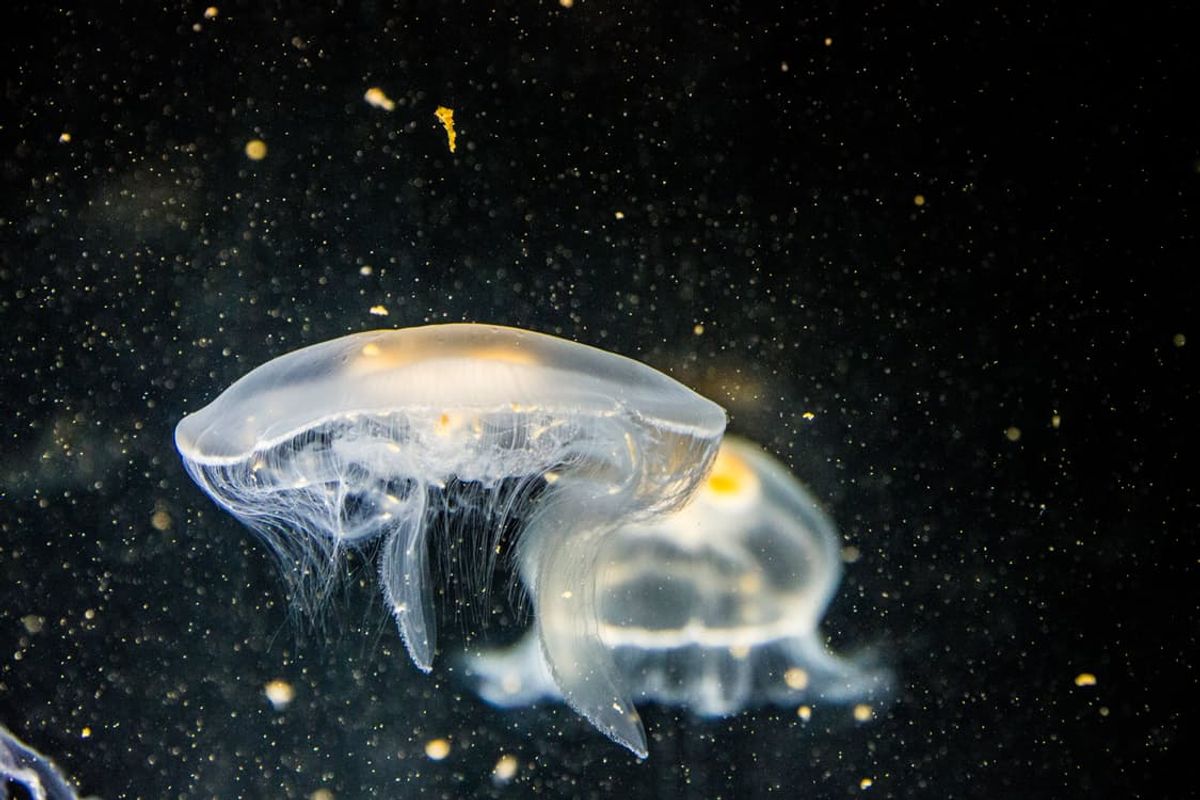 Claim:
Jellyfish and lobsters are considered biologically immortal, meaning they don’t age and will never die unless they are killed.
Rating:

One species of jellyfish, Turritopsis nutricula, is considered biologically immortal as it can—and does—revert to its immature state even after reaching sexual maturity.

Despite not showing the typical signs of aging during their lives, lobsters can and do die from old age.

Memes like the one presented above, containing the very cool-sounding claim that both jellyfish and lobsters are biologically immortal, have been popular on the internet for years.

Biological immortality is usually defined as an organism that will not die from senescence, the scientific term for aging. However, as reported for BBC Earth by Colin Barras, the term is a bit of a misnomer:

What we're talking about here is "biological immortality", although many biologists would probably rather we didn't use the phrase. "Immortal really means you don't die at all, which is stupid," says Thomas Bosch at the University of Kiel, Germany.

Paradoxical though it might seem, biologically immortal organisms are definitely mortal. They can be killed by a predator, a disease, or a catastrophic change in the environment such as an erupting volcano. But unlike humans, they rarely die simply because they get old.

To put it another way, biologically immortal organisms do die, but they don't seem to age.

Not all jellyfish are immortal, but apparent biologic immortality has been documented in one specific species of jellyfish known as Turritopsis nutricula —popularly referred to as the immortal jellyfish. This phenomenon was first described in a 1996 paper, demonstrated in later laboratory experiments, and is well-described in a 2013 Berkeley Science Review story by Nikki R. Kong:

When it encounters unfavorable environmental conditions, the adult Turritopsis—normally overflowing with tentacles that evoke the image of the head of Medusa—simply sinks to the ocean floor and reverts to its juvenile polyp phase that resembles nothing more than a tiny clump of cells. Even more fascinating is that the jellyfish can repeat this process of regression and re-growth endlessly.  To date, there have been no reported observations of its death due to aging.

While multiple jellyfish species can revert to earlier life stages, Turritopsis is unique because it can do this even after reaching sexual maturity.

Lobsters, however, are not biologically immortal. A discussion on this piece of internet misinformation in Smithsonian Magazine suggested that it has its origins in a 2007 NPR story about how lobsters don’t age in typical ways:

The viral scientific tidbit can be traced back to a brief 2007 news story that reports that lobsters don’t show typical signs of a phenomenon known as senescence. In plain terms, the report says that lobsters don’t age the way other living creatures do—they don’t lower their reproductive ability, slow their metabolism or decrease in strength. This led to extrapolations that lobsters, if left undisturbed, can’t die.

What is true, however, is that lobsters do not age in a traditional sense, as discussed in a 1998 study published in FEBS Letters:

Humans and other mammals stop growing after reaching the adult stage. During their longest life period, size and weight are kept essentially constant. Lobsters grow continuously throughout their lifespan, only decreasing growth rates with age. Furthermore, and again in contrast to humans, they are able to regenerate whole limbs even at a high age. These characteristics assume a life-long high proliferative capacity also in cells of differentiated tissues and not restricted to the embryonic stage.

A leading hypothesis for this phenomenon is that lobsters have a constant supply of an enzyme called telomerase, which can prevent cell aging. Most vertebrate animals, on the other hand, can produce this chemical ONLY in early developmental stages of life.

But lobsters do ultimately end up dying, if not from a predator or disease, then simply from the process of non-stop growth. Lobsters grow by molting their exoskeleton—a very energetically demanding process that, as discussed in Smithsonian Magazine, ultimately will get the best of even the most resilient lobsters:

According to Carl Wilson, lead lobster biologist with the Maine Department of Marine Resources, between 10 and 15 percent of lobsters die naturally each year as they shed their exoskeletons because the exertion proves to be too much. Each molting process requires more and more energy than the one before it as lobsters grow in size.

Finally, older crustaceans stop shedding their exoskeletons altogether—a clue that they’re near the end of their lifespans. They run out of metabolic energy to molt, and their worn-and-torn shells contract bacterial infections that weaken them. Shell disease, in which bacteria seeps into lobster shells and forms scar tissue, adheres the crustaceans’ bodies to their shells. The lobster, attempting to molt, gets stuck and dies. The disease also makes lobsters susceptible to other ailments, and in extreme cases, the entire shell can rot, killing the animal inside.

Those 10 to 15 percent that die from the exertion of molting directly counter the claim that lobsters are biologically immortal creatures, as that would be considered death from senescence. Death from infection later in life, while a bit more of a philosophical debate, could also be argued to be natural death from aging, as College of William & Mary marine science professor Jeffrey D. Shields, said in the Smithsonian piece:

“Is that senescence? Maybe not in how we think about it, [...] But it is senescence in the way that older people die of pneumonia.”

One thing that is true — it is really difficult to figure out how old lobsters are due to their perennially young cellular tissue. While lobsters will always die, and probably can’t accurately be described as “living fast”, one could indeed argue, then, that they will always die young.