Blue bananas are said to taste like vanilla ice cream, and the skin of the fruit is a silvery pale blue. 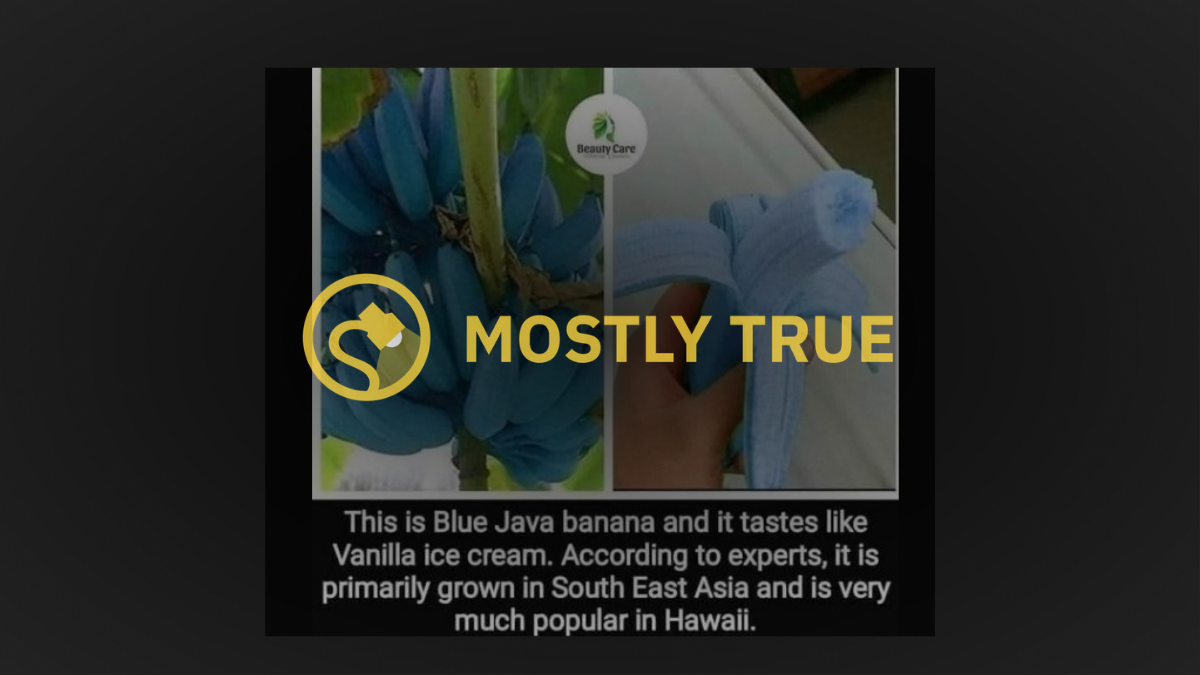 Claim:
With an outer blue skin, the brightly hued “blue java banana” depicted in various online photographs is a real fruit and it tastes like vanilla ice cream.
Rating:

Blue java bananas and their vanilla flavor are real; however, experts warn that many photographs online have been altered to make their hue appear more dramatic.

The blue-hued skin of the vanilla-flavored ice cream banana may seem too good to be true, but the so-called “ice cream banana” is an edible fruit that has paved its way on the internet due to its unique coloration.

Also known as the “blue java banana,” various iterations and photographs claiming to depict this unique fruit have existed on social media since at least 2017. In July 2021, Snopes readers sent our team the below meme to verify if the blue-hued fruit existed: While it is true that the blue java banana is real, we have to note that some websites appear to overly saturate or alter photographs of the fruit, which exaggerate the blue coloration. As such, we have rated this claim as “Mostly True” given that the photographs featured in the meme in question were likely altered to appear more vibrant.

“This fruit is not really blue! Many photos of blue java on the internet are photoshopped,” wrote rare fruit harvester Miami Fruit on its website. “As it ripens, the outer peel will turn fully yellow.”

The blue java banana belongs to the banana family of plants Musaceae, and is a cultivar, or hybrid, of two species of banana, the Musa balbisiana and Musa acuminata. Nearly all cultivated varieties of bananas and plantains are seedless, or sterile, and are propagated and cloned from the offshoots of mature plants known as pups, according to a 2015 study published in the journal Plant Gene.

Native to Southeast Asia, the blue java banana can grow up to 20 feet tall, and has silvery green leaves, according to the California Rare Fruit Growers, Inc. The skin of the fruit is silvery pale blue in coloring when unripe but turns a pale yellow when ripe. And as its nickname suggests, the vanilla-like taste of the fruit pairs nicely with ice cream when eaten fresh or cooked. The skin of the blue java banana is a silvery hued blue when unripe and turns to a pale yellow when the fruit is ready for consumption. Titabanana/Public Domain