Were AR-15s Used in These Mass Shootings?

A viral meme asserted that AR-15 style weapons have frequently been used to commit deadly acts of violence. 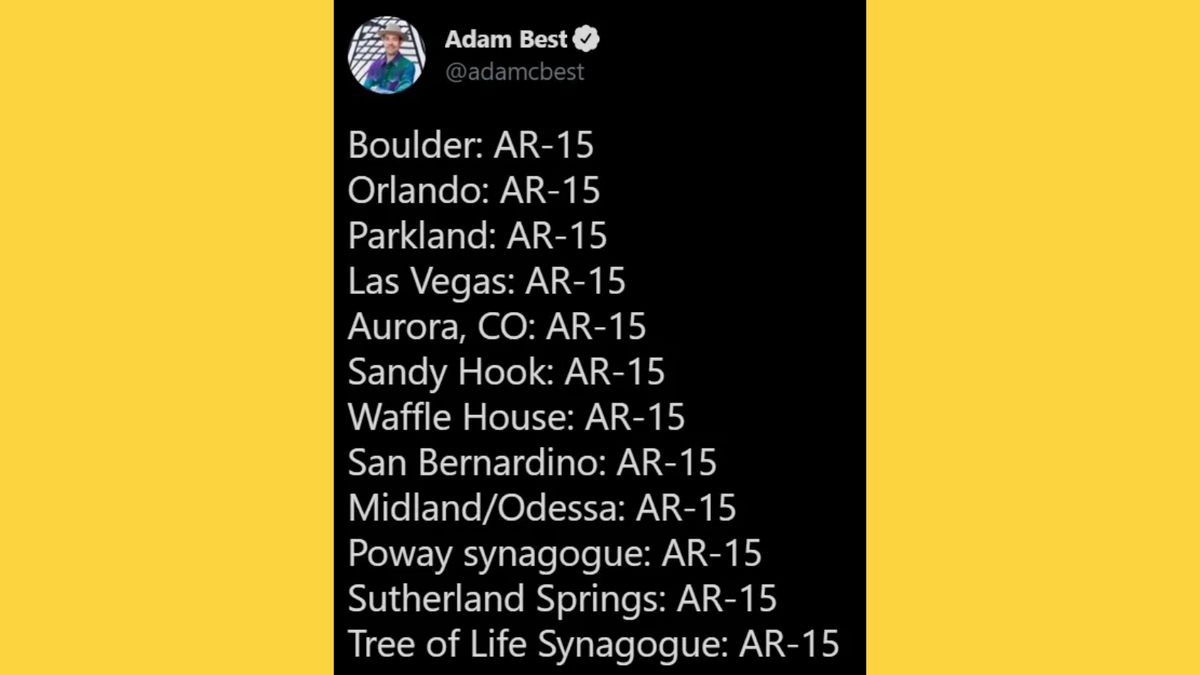 Claim:
A viral list accurately lists more than a dozen mass shootings in the U.S. in which an AR-15 was used to kill people.
Rating:

In the aftermath of a mass shooting in Boulder, Colorado, that left 10 people dead on March 22, 2021, a piece of text that purportedly listed recent mass shootings committed with an AR-15 in the U.S. went viral on social media: An AR-15 style weapon was used in all of the mass shootings mentioned on this list with the exception of one. The gun used in the Pulse Nightclub shooting in Orlando, Florida, that left 49 people dead in June 2016 was a semi-automatic rifle called the Sig Sauer MCX. The type of weapon used in Boulder, Colorado, in March 2021 is not currently known, but CNN reported that the "weapon used in the shooting was an AR-15 style rifle."

It should also be noted that the Colt Manufacturing Company owns a trademark on the "AR-15" name. When a weapon is described as an "AR-15 style weapon," it means that the weapon is practically identical in form and function to Colt's AR-15, but that it is manufactured by a different company. The weapon used to kill dozens of people at Sandy Hook Elementary School in Newtown, Connecticut, in December 2012, for example, was an XM-15, which is an AR-15 style weapon manufactured by Bushmaster.

We examined a similar list back in 2018 and found that AR-15 style weapons were used to kill 12 people at a movie theater in Aurora, Colorado, in June 2012; 27 people (including 20 children) at Sandy Hook Elementary School in Newtown, Connecticut in December 2012; 14 people in San Bernardino, California, in December 2015; 26 people at a church in Sutherland Springs, Texas, in November 2017; and 17 people at a school in Parkland, Florida, in February 2018.

Since that list went viral in 2018, a few more deadly incidents have taken place that used AR-15 style weapons, including the Las Vegas shooting in October 2017 that left 61 people dead; the Waffle House shooting that killed 4 people in Nashville, Tennessee, in April 2018; the Midland–Odessa shooting in August 2019 that left 8 dead; the Poway Synagogue in Poway, California, in April 2019 that killed 1 person; and the Tree of Life Synagogue shooting in Pennsylvania in October 2018 that left 11 people dead.

In May 2022, another updated version of this list went viral on social media that included entries for Uvalde, Texas, where 19 children and two adults were killed at Robb Elementary School, and Buffalo, New York, where 10 people were killed in an apparent racially motivated attack at a supermarket. In both instances, an AR-15 or an AR-15 style weapon was used in the shooting.

Reports about mass shootings in the United States are commonly followed by reports that the gunman used an AR-15. The New York Times reported in 2018:

When a gunman walked into Marjory Stoneman Douglas High School on Feb. 14, he was carrying an AR-15-style rifle that allowed him to fire upon people in much the same way that many American soldiers and Marines would fire their M16 and M4 rifles in combat.

Since 2007, at least 173 people have been killed in mass shootings in the United States involving AR-15s, according to a New York Times analysis. The grim list includes crimes in Newtown, Conn.; Las Vegas; San Bernardino, Calif.; and now Parkland, Fla.

It should be noted that this is not an exhaustive list of every mass shooting in the U.S. For example, a few days before the 2021 Boulder, Colorado, massacre, another mass shooting took place in Atlanta, Georgia, that left eight people dead. That incident involved a 9mm semi-automatic pistol, not an AR-15, that was purchased on the same day of the shooting.

Correction [March 23, 2021]: A previous version of this article erroneously stated that nine people were killed in March 2021 Atlanta shooting. The correct number is eight.