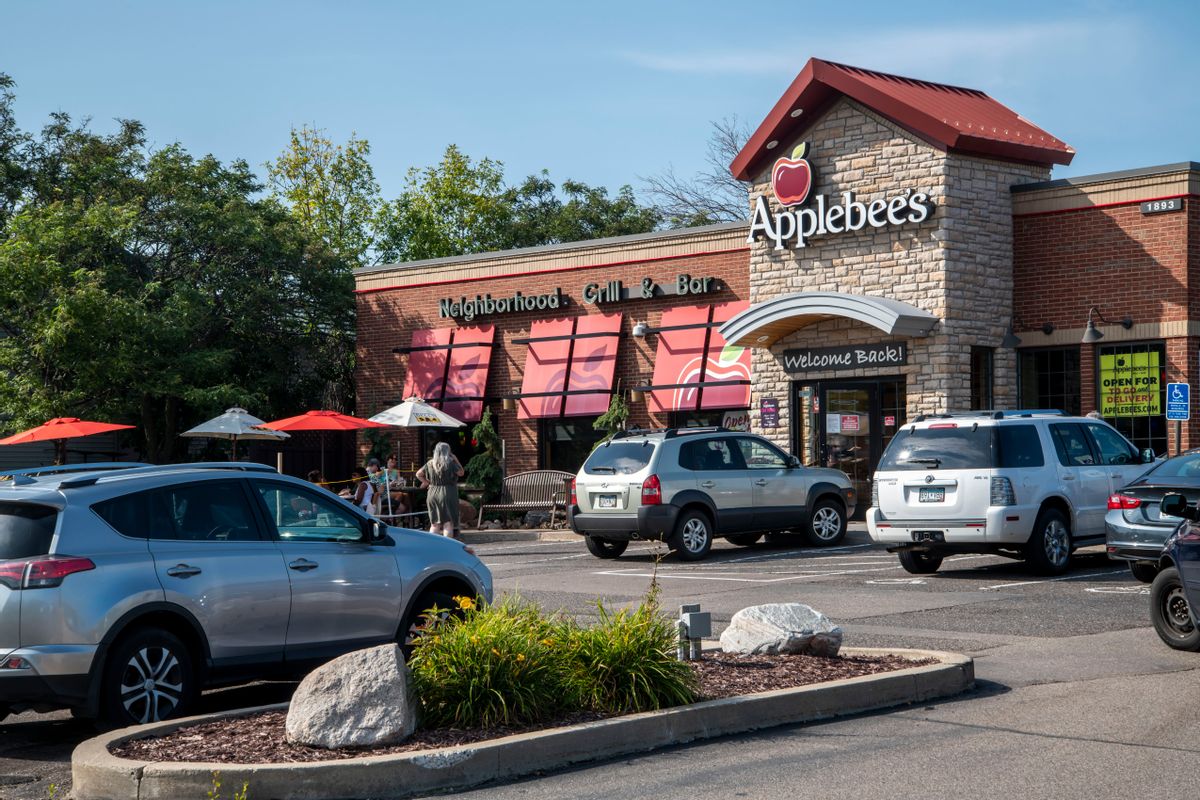 Claim:
A sign with an Applebee's logo specifying that minors must be accompanied by a parent or "adult spouse" means the company welcomes adults married to "child brides."
Rating:

As we've documented below, the verbiage worded as "adult spouse" is standard for "No minors allowed" signs posted in bar or lounge sections of restaurants.

In early August 2022, readers asked us to research a viral tweet with a picture that purportedly showed the words "adult spouse" on a sign in an Applebee's restaurant. The sign read, "Minors are not permitted in this area unless accompanied by a parent, adult spouse, or legal guardian."

An Applebee's logo was visible in the corner of the "adult spouse" signage.

Judging from the stools and tall glasses, the photo looked to show an area near an Applebee's restaurant's bar. The minimum drinking age for alcohol in the U.S. is 21 years old. Some states have exceptions.

Several postings of the picture claimed that it was captured in Alabama, but this seemed to be little more than a tongue-in-cheek assumption about the state. In fact, one Reddit user countered this assumption by providing data that appeared to show the state of California had a higher child marriage rate than Alabama, which referred to teenagers between ages 15 and 17. The actual city and state where the picture was taken was initially unclear.

Many Reddit users were quick to point out the more likely meaning of the sign. One commenter, responding to what others were apparently inferring about the signage, said, "They assume the 'adult spouse' = pedophile and/or groomer. Ignoring that it could refer to an 18 or 19 year old (under 21) married to a 22 year old (over 21). When referring to the legal drinking age, a 'minor' refers to anyone under that age. That might be going over their heads."

Indeed, the phrase "adult spouse" is quite common in signage and legal verbiage pertaining to minors and the purchase or consumption of alcohol. For example, Wisconsin law states:

Except as provided by paragraph c., any underage person may not enter or remain on premises for which a Class "B" licenses issued without a valid purpose under paragraph (d), unless the person is a resident, employee, or a bona fide lodger or boarder on the premises, or is accompanied by his or her parent, guardian or adult spouse who is of legal drinking age.

A minor commits an offense if the minor consumes an alcoholic beverage outside the visible presence of his parent/guardian or adult spouse.

And so on. Applebee's is a large and familiar restaurant chain popular with American families and in many countries around the world. The idea that the company's signage stating its bar seating rules regarding customers under 21 gives a thumbs-up to "pedophiles" and "groomers" simply does not square with reality.

We contacted Applebee's media relations personnel by email but did not receive a response. This fact check will be updated if we receive any further information.