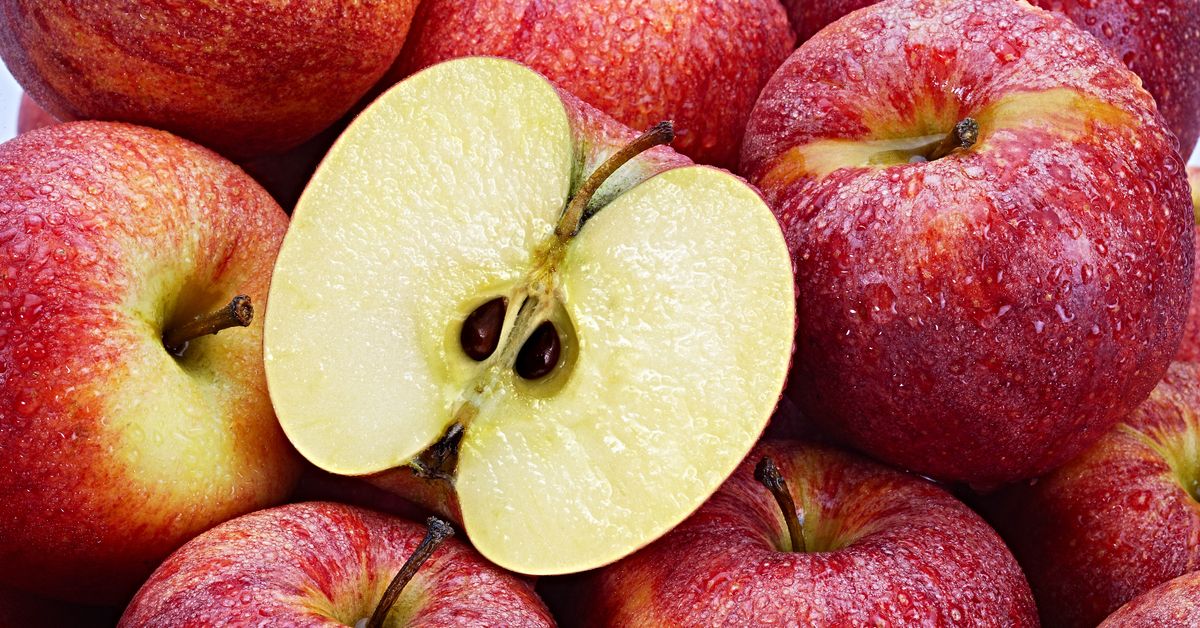 Ordinary consumption of seed-containing apples poses a harm to consumers.

When we think of dangers lurking in our food, we tend to concentrate on the threats posed by chemical additives or by improper and careless handling. Yet the truth is we routinely come into contact with naturally occurring poisons in a number of the fruits we ingest.

Apples are one such fruit: their pips (seeds) contain amygdalin, a cyanide and sugar compound that degrades into hydrogen cyanide (HCN) when metabolized. Cyanide itself is a poison that kills by denying blood the ability to carry oxygen and thereby causes its victims to die of asphyxiation. At least within the realm of murder mysteries, cyanide is the darling of poisoners because it acts quickly and irrevocably: once a fatal dose has been ingested, there is no effective antidote, and death takes place within minutes. It is sometimes described as having a bitter almond smell, but it does not always give off an odor, nor can everyone detect the scent. Cyanide is usually found joined with other chemicals in compounds: hydrogen cyanide, cyanogen chloride, sodium cyanide, and potassium cyanide. In the death camps of World the Nazis used hydrogen cyanide for their gas chambers.

Luckily for those fond of their Granny Smiths, the body can detoxify cyanide in small doses, and the number of apple seeds it takes to pack a lethal punch is therefore so huge that even the most dedicated of apple eaters is extremely unlikely to ingest enough pips to cause any harm. Yet those who have heard apple seeds house a poison (usually remembered as arsenic, a quite different though equally deadly compound) cling to the frightening belief swallowing a small number of pips spells instant death. We've had folks fret to us that ingesting as few as three apple seeds would do someone in, a "fact" which, if true, would mean each and every one of us was flirting with the grim reaper every time we made a grab for a Delicious.

Apple pips also have a tough protective coating which makes swallowing them even less of a risky proposition; unless the pips are pulverized or masticated, the amygdalin they house remains safely contained within. Apple pips have hard, durable shells that allow them to pass intact through the digestive systems of animals, a quality which helps the apple to reproduce by distributing its seeds to new locations far from the originating trees. Were apple pips susceptible to the eroding effects of digestive juices, apple trees could not reproduce nearly as well as they do, as their seeds would not be so widely spread and a good many of the pips would be destroyed before germinating.

Cherry, peach, and apricot pits also contain amygdalin; the latter two, at least, in potentially harmful amounts. Fortunately, peach and apricot pits are sufficiently large and hard that few people intentionally swallow or chew them. (The unapproved anti-cancer drug Laetrile is a semisynthetic derivative of amygdalin; a cheaper version of laetrile produced in Mexico came from crushed apricot pits.)

A far greater natural source of cyanide is the cassava root, a vegetable favored by many in Africa. (Westerners know this plant best as tapioca.) Drying, soaking, and baking cassava roots renders its cyanide precursor, linamarin, harmless, but if that process is not carried out properly the cassava can remain poisonous.