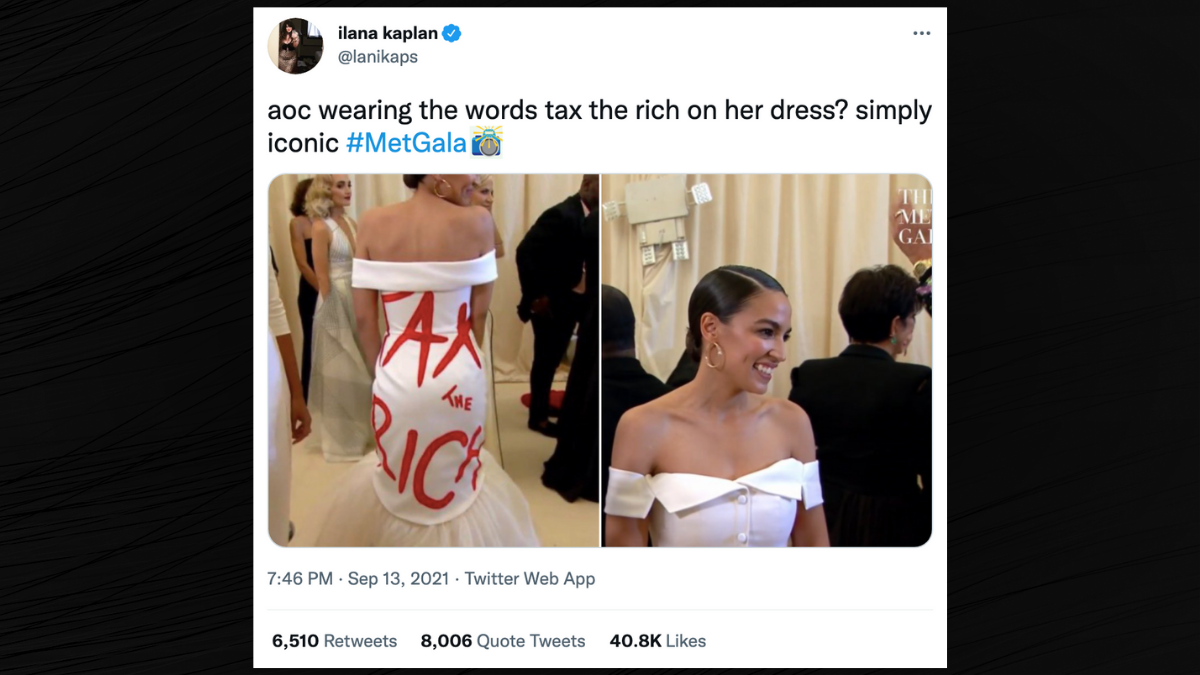 Claim:
In September 2021, U.S. Rep. Alexandria Ocasio-Cortez attended the Met Gala wearing a dress with the words "Tax the Rich" printed across it.
Rating:

In September 2021, social media users enthusiastically shared photographs of U.S. Rep. Alexandria Ocasio-Cortez (D-NY) which appeared to show her wearing a dress with the words "TAX THE RICH" printed across it. The New York congresswoman, widely known as AOC, purportedly wore the dress at the Met Gala, an exclusive event popular among New York socialites and wealthy and well-connected individuals.

For example, on Sep. 13, journalist Ilana Kaplan posted two photographs of AOC to Twitter, one of which showed her wearing a white dress with the words "TAX THE RICH" printed across the back in bold red letters. Kaplan described the outfit as "iconic": Those pictures were authentic. AOC attended the Met Gala at the Metropolitan Museum of Art in New York City, on Sep. 13. She wore a white dress, designed by the Canadian fashion designer Aurora James, with her political message of choice printed across the back.

On Twitter and Instagram, Ocasio-Cortez posted a photograph of herself, wearing the dress, alongside James, along with the following description:

The medium is the message.

Proud to work with Aurora James as a sustainably focused, Black woman immigrant designer who went from starting her dream at a flea market in Brooklyn to winning the [Council of Fashion Designers of America awards] against all odds - and then work together to kick open the doors at the Met.

The time is now for childcare, healthcare, and climate action for all. Tax the Rich.

And yes, BEFORE anybody starts wilding out - NYC elected officials are regularly invited to and attend the Met due to our responsibilities in overseeing our city’s cultural institutions that serve the public. I was one of several in attendance... Getty Images also captured dozens of photographs of AOC and her dress at the event, providing further definitive proof of its authenticity: