Did Confederate Flags Fly at a Gun-Rights Rally in Virginia? 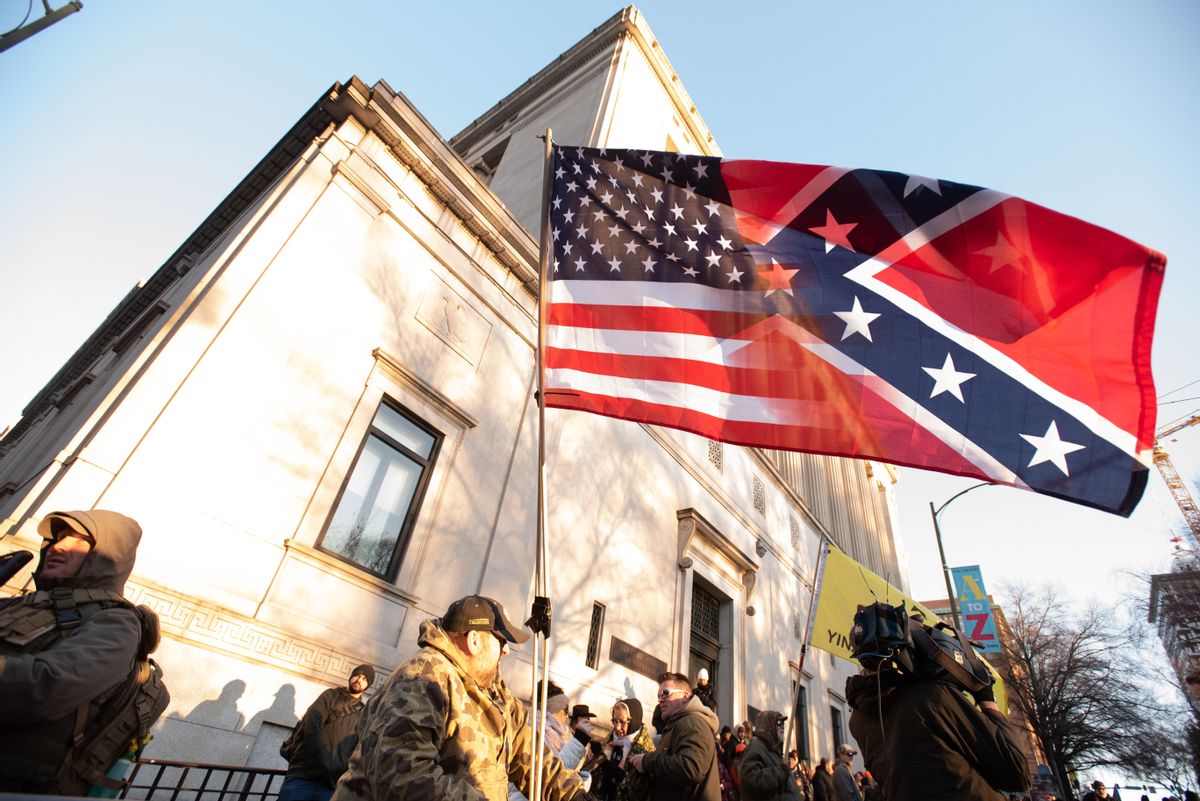 On Jan. 20, 2020, gun-rights advocates gathered in Richmond, Virginia, to protest proposals by Democratic lawmakers in the state to introduce and re-introduce various restrictions on the sale and use of firearms. According to various news reports and photographic accounts, the rally also encompassed the articulation of mostly right-wing and libertarian concerns and policy priorities, including support for the re-election of President Donald Trump, opposition to taxation and the power of the federal government, and criticism of Virginia's Democratic Gov. Ralph Northam.

On the same day, U.S. Rep. Alexandria Ocasio-Cortez, D-New York, took part in a celebration and commemoration of Martin Luther King Jr., at the Riverside Church in Harlem, New York. During an on-stage conversation with the event's moderator (writer Ta-Nehisi Coates), Ocasio-Cortez criticized what she presented as typically heavy police presence at left-wing, racial justice-oriented protests, such as those hosted by the Black Lives Matter movement, and a purportedly low law enforcement presence at events such as the Richmond gun-rights rally, despite the presence of many armed participants.

Here's a short excerpt from the discussion, which can be watched below:

Ocasio Cortez: ... There's this gun-rights protest that's happening down in Richmond --
Coates: On MLK Day.
Ocasio Cortez: On MLK Day. But here's the image that has struck with me the most about that, is that when we go out and march for the dignity and the recognition of the lives of people like Freddie Gray and Eric Garner, the whole place is surrounded by police in riot gear, without a gun in sight. And here are all of these people flying Confederate flags with semi-automatic weapons, and there's [sic] almost no police officers at that protest. So who or what are our institutions protecting from whom?

The congresswoman's claim that the Richmond protest had featured the flying of Confederate flags was venomously rejected by some right-leaning observers, including Ryan Saavedra, who works for the Daily Wire website; he called Ocasio-Cortez "a total fucking liar" on the basis of her claim:

Another Twitter user rejected the congresswoman's claim, saying it demonstrated that she was "clearly trying to stir up hate," and several others posted specific photographs of the rally that did not contain Confederate flags, purportedly as proof that Ocasio-Cortez' claim was false. In an article for the Daily Wire, Saavedra later accused her of attempting to "gaslight" the public, writing:

"Ocasio-Cortez’s claim is weak at best as the overwhelming majority of images and video that was available online showed no Confederate flags at the rally. The Daily Wire also spoke to over half a dozen activists who attended the rally, all of whom said they did not see a single Confederate flag."

However, Saavedra did concede that "While there is certainly the possibility that a fringe protester may have had a flag that eluded media scrutiny, Ocasio-Cortez’ claim suggested that the flying of Confederate flags was a common occurrence at the rally, which is verifiably false."

In reality, we found several photographs that showed several different protesters carrying or displaying several different Confederate flags at the gun-rights demonstration. Contrary to Saavedra's claim, those pictures did not "elude media scrutiny," but were published by three of the world's largest editorial photography agencies and a local journalist, among other sources.

Confederate flags certainly did not predominate at the rally — the "Stars and Stripes" appears to have been a far more prevalent choice among attendees — but Ocasio-Cortez' claim that protesters flew Confederate flags was nonetheless accurate.

It's important to note that the Confederate battle flag — the familiar design most commonly described as the "Confederate flag" and most often the subject of political controversy — is only one of several variants of the Confederate flag, as we have examined in greater depth in a previous article.

We found multiple photographs showing various Confederate flags, published by Reuters, Getty, and Associated Press agencies. Some featured a design in which the Confederate battle flag melded with the "Stars and Stripes": In sum, Confederate flags did not predominate at the Richmond pro-gun rights rally, but Ocasio-Cortez' claim that protesters carried Confederate flags there was accurate, despite the protestations and name-calling of some right-leaning commentators.

Palma, Bethania.  "Did Virginia Governor Say He Would Cut Power, 'Have You Killed' for Not Turning Over Guns?"   Snopes.com.  26 December 2019.