Was the 'Patriot Party' Name Used Before Trump Supporters Adopted It?

We dug through numerous newspaper archives for a sampling of political groups that organized under the name. 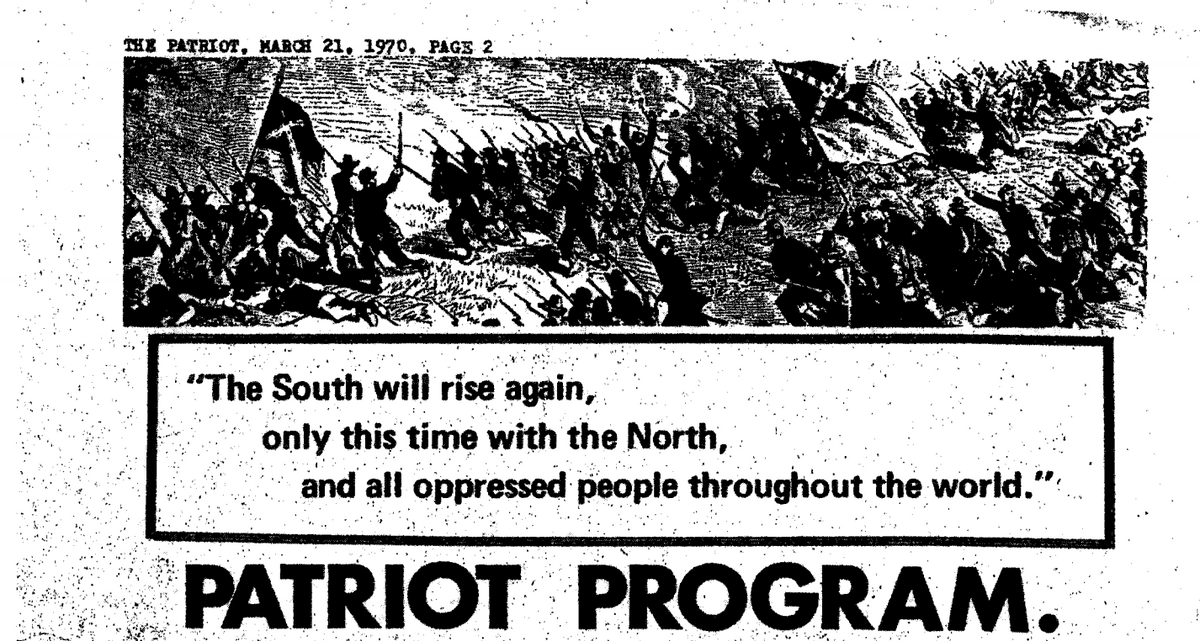 Image Via Screenshot of Patriot Party pamphlet via collectiveliberation.org

Claim:
A group of activists against fascism organized as the "Patriot Party" decades before Trump supporters adopted the name in early 2021.
Rating:

Some of his supporters quickly drafted logos and slogans for the political group, as well as started organizing in far-right corners of social media sites.

One Trump supporter even went so far as to file paperwork with the Federal Election Commission (FEC) to establish a formal system for fundraising for the Patriot Party — an effort Trump's official campaign later disavowed. (See our fact check regarding claims that Trump was indeed creating an alternative to the Democratic and Republican parties here.)

Meanwhile, Snopes received several inquiries about the origin of the "Patriot Party" name. One Twitter user alleged activists against fascism actually organized as "The Patriot Party" in the 1960s, decades before Trump supporters attempted to appropriate the title.

"The first Patriot Party in the 60s was ... Antifa. I cannot stop laughing," read the Jan. 19 tweet, which included a screenshot of a Wikipedia page that alleged "poor, rural whites in the Appalachian South and Pacific Northwest" formed the radical socialist organization that advocated alongside the Black Panthers.

Based on our analysis of numerous newspaper clippings between 1960 and early 2021, the allegation was true: Though neither the organization nor its members used the name "antifa," a far-left political organization of predominately white Americans called the Patriot Party formed at the end of the civil rights movement to advocate against racism and fascism.

Additionally, dozens of hate groups contained the term "Patriot" in their names, and supporters of Texas billionaire Ross Perot, who railed against the country's two-party system during two failed campaigns for president in the 1990s, attempted to start the third party before Trump politics existed.

In the late 1960's, a leftist group called the Young Patriots Organization (YPO) formed in Chicago to fight racism and capitalism in solidarity with similarly-minded activists of color, according to the news archives. The group intended to radicalize poor white residents who moved to the Midwest city from Appalachia.

“It was a poor people coalition,” Hy Thurman, a founding member of the YPO, later recalled, according to The Washington Post. “Poor people organizing in their own community against racism and supporting the Black power movement at the time.”

The group had a working partnership with the Black Panthers and Young Lords, a predominately Puerto Rican group.

For example, a leader of the YPO spoke at the July 1969 "Conference for a United Front Against Fascism" organized by the Black Panthers, according to Jacobin, a New York-based socialist magazine. Additionally, video footage showed a a YPO member introducing Black Panther Bobby Lee at a rally as someone who's "fighting for some of the same causes we're fighting for."

In 1970, amid an internal disagreement over mobilizing strategies, some YPO members broke away from the main organization to start their own group called the Patriot Party, according to the Post.

"Like the Panthers, the Patriot Party sought to reach people in poverty-stricken neighborhoods by offering free health clinics, a free breakfast program and even its own 'liberation schools' that sought to impart revolutionary ideals to children. In Eugene, Ore., the group distributed free firewood to rural whites who relied on wood stoves for warmth."

A 1970 pamphlet, a portion of which is the feature image for this report, said the group was pushing for "an immediate end to police brutality," freedom for "all oppressed white people" held in prisons, and an end to all sexism and racism. Another bulletin from that year outlining the group's mission said it loved America, and the declaration of Independence, and that the Constitution is "groovy."

The Patriot Party, however, dominated news headlines nationwide in early 1970 after police arrested 12 members (all between the ages of 17 and 27) during a raid of an apartment on Manhattan's Upper West Side. The apartment reportedly served as the group's headquarters, where authorities said they found weapons, including guns and knives, and leftist literature, according to the archives.

"The door was stomped in by the fascist pigs of America in true fascist style," attorney Arthur Turco, one of the Patriot Party members, later said during the court proceedings, with the Panthers and the Chicago Seven backing him up. "They busted in without a search warrant. The guns we had were legally registered."

The suspects told officers they were indeed part of the Patriot Party that attempted to convince working-class white Americans to abandon racist beliefs and instead fight capitalism, according to The Associated Press and Post. Members were frequently arrested on charges of possessing illegal drugs or weapons — like the Panthers, the Patriots emphasized the importance of being armed — and the ensuing legal battles prevented them from focusing on their goal of organizing the working class. [...]

Within just a few years of its formation, the Patriot Party’s activities were reduced to distributing a left-wing newspaper, and the group soon effectively ceased to exist.

Following the dissolve of the leftist "Patriot Party," a group of anti-Semitic, white supremacists in North Carolina appropriated the name for its own agenda.

A 1985 court order prohibited Frazier Glenn Miller — who represented a new, militant breed of Ku Klux Klan leaders and is pictured below — from operating the Carolina Knights of the KKK as a paramilitary organization that threatened, harassed, intimated or harmed people on the basis of race, according to the Southern Poverty Law Center (SPLC).

As a result, he rallied followers under a new name — the White Patriot Party — and resumed "Klan business as usual," the SLPC said. At least four Marines and some Army soldiers in North Carolina had attended rallies or other events by the White Patriot Party, whose members trained with guns and wore military-style uniforms, The New York Times reported.

The Philadelphia Inquirer reported in fall 1986:

"Leaders of the White Patriot Party long maintained that they were building a 'white Christian army' that would help in the violent formation of an all-white Southern state by the end of the century." In January 1987, a federal grand jury in Raleigh, North Carolina, indicated Miller and four other members of the White Patriot Party on charges of conspiring to obtain weapons and explosives stolen from a National Guard armory, The Associated Press reported. They were allegedly plotting to blow up the SLPC headquarters in Montgomery, Alabama, and murder Morris Dees, a lawyer who co-founded the anti-hate organization.

"What we have are dangerous individuals who are fanatics who might do anything, especially now. They hate the federal government. They feel oppressed and intimidated by what we are doing and there is a tendency to strike back," former U.S. Attorney Sam Currin said at the time.

In the 1992 presidential race between Republican incumbent George H.W. Bush and Democrat Bill Clinton, Texas billionaire Ross Perot amassed a following as an independent presidential candidate who criticized both major parties for chasing fame instead of effectively legislating.

He captured almost a fifth of the popular vote in the three-way race, making him one of the most successful independent candidates in American history, according to BBC.

The Jan. 24, 1993, issue of The Morning Call, a local newspaper for Pennsylvania's Allentown, reported:

Ross Perot's core supporters in Pennsylvania yesterday held their first convention as an independent party, choosing the name "Patriot Party" on a 43-16 vote at the Harrisburg Hilton Hotel.

Perot distanced himself from the third-party movement, however, and later campaigned for Republican congressional candidates. Still, the new political group sought campaign donations, candidates, and voters to try to legally establish itself as a major competitor with the Republican and Democratic parties that championed free-market economics and greater government accountability.

"The movement toward favoring the existence of a third political party existed long before Perot came on the scene," National Chairman Nicholas Sabatine III said in fall 1994. "Mr. Perot didn't create the anger, the frustration the cynicism that exists in the minds of Americans around the country."

Perot launched a presidential campaign again in 1996, this time as a candidate of the "Reform Party."

This report was updated to clarify that Perot ran as a presidential candidate for the Reform Party in 1996.