The trope of derided protesters uncaringly killing an innocent victim by blocking an ambulance is a common one in recent years. 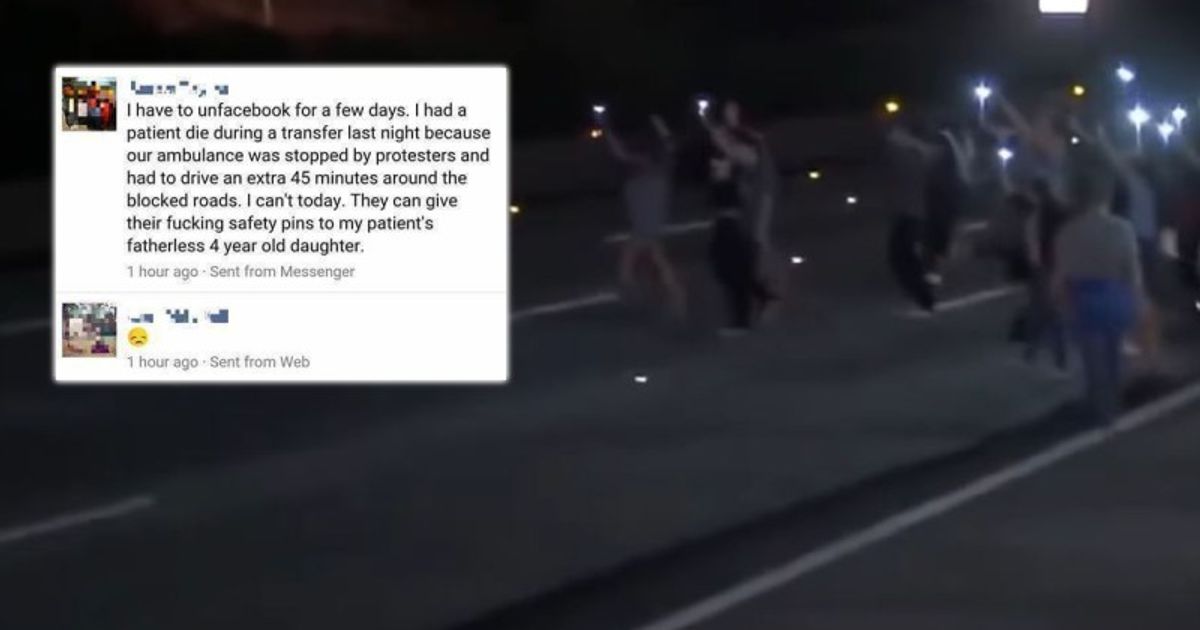 Claim:
The father of a 4-year-old girl died after anti-Trump protesters blocked roads and delayed an ambulance from reaching the hospital.
Rating:

In mid-November 2016, social media users spread — and political conspiracy-mongering sites such as InfoWars picked up on — a claim that anti-Trump protesters had blocked roads and delayed an ambulance from reaching a hospital, resulting in the death of a man:

The father of a 4-year-old girl died after anti-Trump protesters blocked roads and delayed an ambulance from reaching the hospital, according to an anguished message posted on Facebook.

“I have to unfacebook for a few days. I had a patient die during a transfer last night because our ambulance was stopped by protesters and had to drive an extra 45 minutes around the blocked roads,” the anonymous post reads.

“I can’t today. They can give their f**king safety pins to my patient’s fatherless 4 year old daughter,” the post concludes.

We have to note that the trope of derided protesters selfishly killing an innocent victim by blocking an ambulance is a common one in recent years — it popped up in July 2016 in reference to Black Lives Matter protesters, and it typically follows the familiar pattern of an anonymous social media report lacking in detail claiming that a highly sympathetic victim (e.g., a child in need of a transplant or the parent of a young child) was killed by the actions of uncaring protesters, all accompanied by an unrelated image of a protest in some unidentified location:

Protest in Memphis...Will blow your mind....Just learned that a little 12 year old girl was waiting for a heart transplant-time being very crucial. But the interstate was closed down due to the protest.

Her timeline was at a critical state and minutes totally mattered. She had a 45 minute window to receive the transplant, which would have undoubtedly saved her life. But with the interstate being closed down, "Black Lives Matter", she tragically expired.

Very sad. The protest completely shut down the interstate and gave her no hope to live. Oh, forgot to mention, she was African-American.

So, tell me, do you think her life mattered????

We also point out that even InfoWars isn't claiming this most recent alleged blocked ambulance death actually occurred; they only opined that it's "not unlikely" it did:

The report of anti-Trump protesters blocking an ambulance has not been verified, but it’s not unlikely given that anti-Trump demonstrators have blocked roads in numerous cities and states, including the I-94 in Minneapolis, the I-5 in Portland, numerous freeways in Los Angeles, a major highway in Phoenix, and the I-95 in Miami.

We've found no corresponding news reports of any such death occurring (in conjunction with anti-Trump protests or otherwise) in the United States since the 8 November 2016 election.