A quote attributed to Frank said: "Dead people receive more flowers than the living ones because regret is stronger than gratitude." 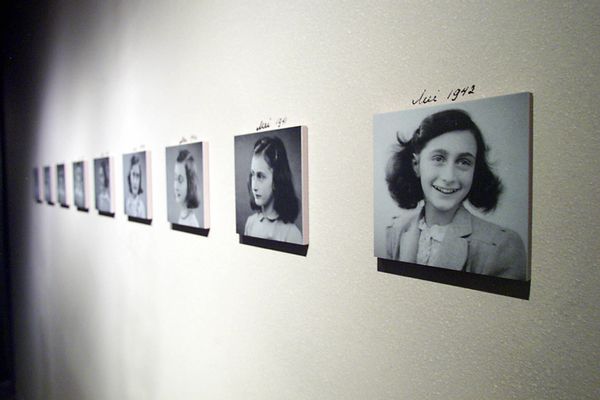 Claim:
Anne Frank said: "Dead people receive more flowers than the living ones because regret is stronger than gratitude."
Rating:

One of the most popular quotes attributed to Anne Frank reads as follows: "Dead people receive more flowers than the living ones because regret is stronger than gratitude."

A Google search for the quote showed several websites that attributed the quote to Frank, which perhaps led a good number of people to believe it was real.

However, there is no record that this quote came from Frank, despite the fact that an image search on Google shows a seemingly endless number of memes: It appeared that at least hundreds of memes had been created to promote the fake quote.

Here's how we looked into the matter. In order to figure out whether or not a prominent figure from history like Frank said this, we took the following steps.

First, we looked to Frank's own writing in "The Diary of a Young Girl," which is better known as "The Diary of Anne Frank." The quote did not appear anywhere in the text. In fact, some of the words in the quote didn't even appear one time in the entirety of her literary work. Tourists are seen in front of the Anne Frank (1929-1945) house (center), remembering her 90th Birthday on June 12, 2019 in Amsterdam, Netherlands. (Photo by Paulo Amorim/NurPhoto via Getty Images)

Next, we searched archived newspapers on Newspapers.com and Google Books. We filtered results to only show articles and writing from the 20th century. According to the results, the words "dead people receive more flowers" never appeared in any newspapers or books before the year 2000, nor did other portions of the purported quote.

In the course of looking for its origins, it appeared that the quote was first published by a Tumblr user on Feb. 23, 2013. This was the oldest mention of the quote that we could find online. The first tweet followed weeks later on April 3. Flowers laid at the Anne Frank (1929-1945) statue near Anne Frank house to remember her 90th Birthday on June 12, 2019 in Amsterdam, Netherlands. (Photo by Paulo Amorim/NurPhoto via Getty Images)

Frank became famous after her death for her series of works that she wrote while hiding from Nazis during World War II. Brittanica.com published that she "died in a typhus epidemic in March 1945, only weeks before the liberation of [the] Bergen-Belsen [concentration camp]." However, "scholars in 2015 revealed new research, including analysis of archival data and first-person accounts, indicating that the sisters might have perished in February 1945."

If readers find another quote that is attributed to a famous figure from history and would like to know if really did come from that person, we recommend using the sources in this story to track down the origins of the words. We would not recommend trusting websites and blogs that collect lists of quotes. While some of the quotes on websites like A-Z Quotes and Goodreads are real, we've found in the past that there were also quite a few that did not come from the people to which they were attributed. Flowers and stones lay on and in front of the gravestone of Margot Frank and Anne Frank after a ceremony to commemorate the 70th anniversary of the liberation of the Bergen-Belsen concentration camp at the former camp site on April 26, 2015 near Lohheide, Germany. (Photo by Alexander Koerner/Getty Images)

In sum, Frank never said "Dead people receive more flowers than the living ones because regret is stronger than gratitude." It's possible that the quote originally evolved from a phrase with a similar meaning, and social media users simply added her name next to it without checking any sources.

After this story was published, we received an email from Anne Frank Fonds, which is described as "the Frank family's universal heir." They confirmed that our "False" rating was correct and that there was no evidence the quote came from Frank.