Users responded to the tweet with the belief that its author was serious. However, that was not the case. 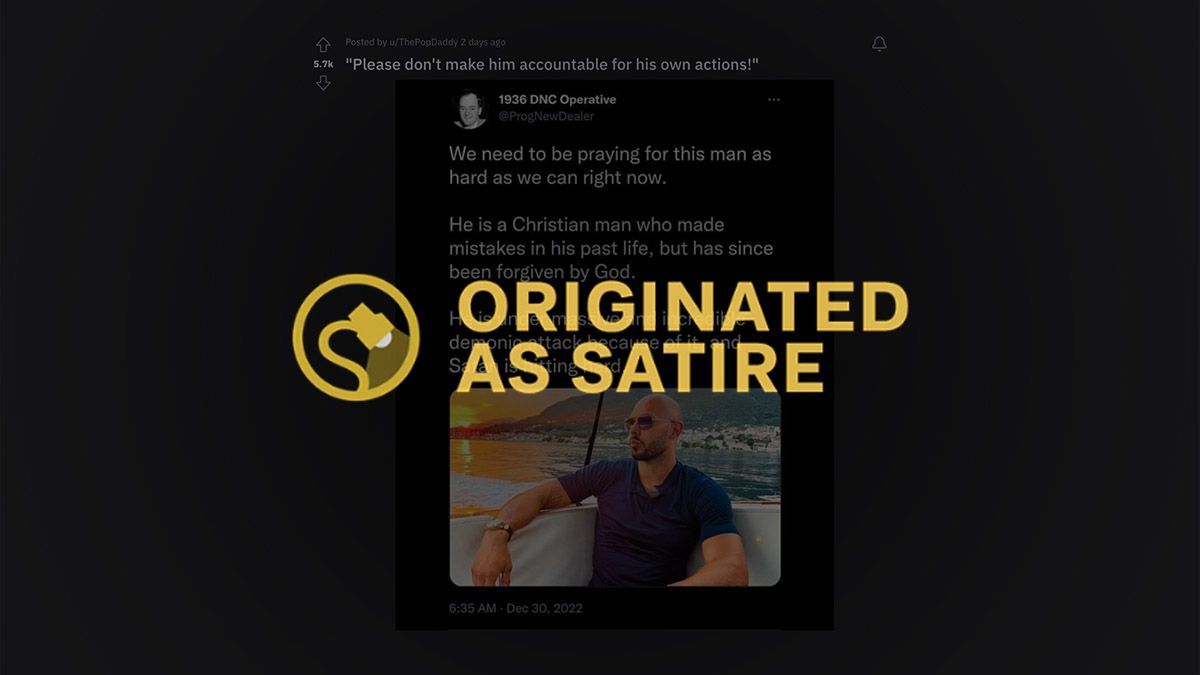 Claim:
A tweet asks for prayers for Andrew Tate and says he's "under massive and incredible demonic attack" by Satan.
Rating:

On Jan. 4, 2023, we received reader mail that asked about a screenshot of a tweet that showed a picture of former professional kickboxer Andrew Tate. The tweet with Tate's photo read, "We need to be praying for this man as hard as we can right now. He is a Christian man who made mistakes in his past life, but has since been forgiven by God. He is under massive and incredible demonic attack because of it, and Satan is hitting hard."

The tweet was originally posted on Dec. 29, 2022. It came from a satirical account named @ProgNewDealer, which showed the display name 1936 DNC Operative.

At one point, @ProgNewDealer quote tweeted their own tweet and said, "Lol the replies," in reference to the users who did not understand that it wasn't a serious message.

While the tweet only received just over 100 likes, it was on Reddit that it appeared to receive the most attention. First, here's a little background.

As we previously reported, Tate and his brother Tristan were arrested on Dec. 29 in the Ilfov area north of Romania's capital, Bucharest, on charges of human trafficking and rape.

On the day following the arrest, a judge ruled that the two men remain in jail for a period of 30 days. Further developments regarding the charges were expected in the future.

We published a fact check that debunked the wildly popular and false rumor that a Jerry's Pizza box shown in one of Tate's videos led to his arrest.

Judging by the replies under the satirical tweet, users believed the author of the message was serious.

"Let everyone know if you ever find reality again," one user replied.

A different person asked, "Why are you praying for a sex trafficker?"

A screenshot of the tweet was shared without its satirical context on Facebook, where a user appeared to be staunchly defending Tate.

We even found a somewhat popular post on the r/WhitePeopleTwitter subreddit on Reddit that had close to 6,000 points.

Commenters under the post appeared to believe that the tweet was a serious message. At the same time, a few of them picked up on clues.

"He ain't Christian tho lmaooo," one person posted, in reference to Tate.

Another user said that he had "literally converted to Islam."

Whatever the case, this tweet originated from a satirical account. It was not a serious post from someone who was genuinely asking for prayers for Tate, nor did they believe that Satan had launched a "massive and incredible demonic attack" against him.

Green, Cedric. "Keep Him in You're Prayers." Facebook, 31 Dec. 2022, https://www.facebook.com/cedric.green.984/posts/pfbid0ekXFmqigvSxPqMYYmG5ao5dRpqyjRfzS2rF1Vfxnp6jaQdNZVTZ2uwSiXiwZVb2Jl.