Did People 'Attack' the Father of a School Shooting Victim for Wearing a Donald Trump T-Shirt?

A very small minority of Twitter users expressed a critical view of Andrew Pollack, but none appear to have addressed their comments directly to him. 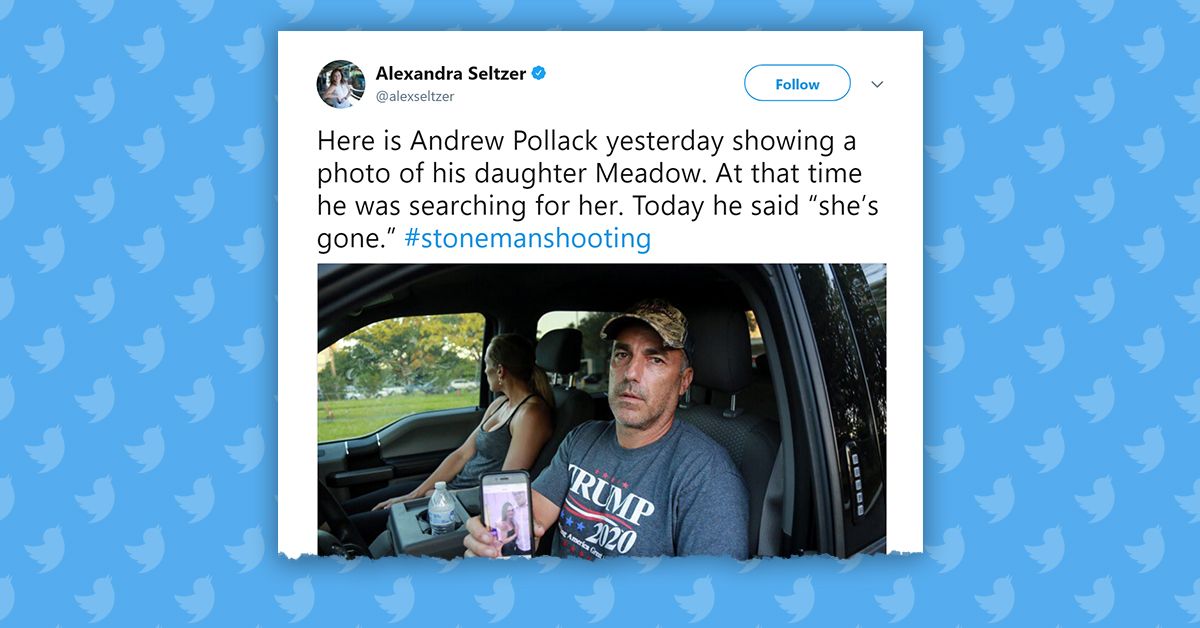 Claim:
A significant number of internet users 'attacked' Andrew Pollack, a man mourning the death of his daughter, on the basis of his support for Donald Trump.
Rating:

A relatively very small number of people on Twitter made insulting and personal criticisms of Andrew Pollack, with one or two even blaming him for his own daughter's death, by way of his support for President Donald Trump.

Those negative voices were overwhelmingly outnumbered by those offering condolences and support to Andrew Pollack and his family, and we found no evidence of anyone addressing a criticism or attack directly at Pollack.

One of the many heart-breaking images to emerge from the 14 February 2018 mass shooting at Marjory Stoneman Douglas High School in Parkland, Florida, was that of Andrew Pollack.

Pollack was photographed by the Palm Beach Post, holding up a cellphone picture of his 18-year-old daughter Meadow, as he waited in his car outside a Broward County hospital, unable to reach Meadow by phone, and fearing the worst.

The reporter who spoke to Pollack, Alexandra Seltzer, later confirmed on Twitter that Meadow had died, one of the 17 victims of a mass shooting carried out by Nikolas Cruz, a former pupil of the high school.

Here is Andrew Pollack yesterday showing a photo of his daughter Meadow. At that time he was searching for her. Today he said “she’s gone.” #stonemanshooting pic.twitter.com/MJcuCNttt8

According to the right-wing Daily Wire web site, what happened next was that "intolerant and hateful leftists attacked a man whose daughter was murdered in the shooting because he is a Trump supporter."

This is Andy. His daughter Meadow was murdered in the Douglas HS shooting on 2-14-18. He is being attacked on social media for being a Trump supporter. Please show him your love and support.

We received enquiries about the authenticity of the tweets quoted by the Daily Wire, and the veracity of claims that Pollack was attacked online for wearing a "Trump 2020" t-shirt.

It is true that a relatively small number of people on Twitter did criticize Pollack on the grounds of his support for President Donald Trump, and one or two went out of their way to articulate their lack of sympathy for him, and even to blame him for his own daughter's death.

The tweets quoted in the Daily Wire's article are authentic, and not fabricated. However, a far greater number expressed sympathy for the grieving father, and criticized those speaking against him.

Furthermore, these comments were not addressed directly to Pollack, who does not appear have a Twitter account.

On Facebook, we trawled through hundreds of comments posted to Pollack's page in the aftermath of his daughter's death. We found just two comments critical of Donald Trump and arguably insensitive to Pollack's grief, but not one personal attack directly addressed to Pollack himself.

On the contrary, Facebook users posted hundreds of messages expressing sympathy, condolences, solidarity and support towards Pollack and his family.

As is often the case with social networking controversies and disputes, the outraged response to an offense (the public slating of Andrew Pollack for his political beliefs) has been vastly greater than the scale of the offense itself.

Pollack and members of his family visited the White House on 21 February 2018, to take part in a "listening session" hosted by President Trump.