Amy Coney Barrett, a Catholic, is also affiliated with People of Praise, a "charismatic Christian community” whose teachings include women being subordinate to their husbands. 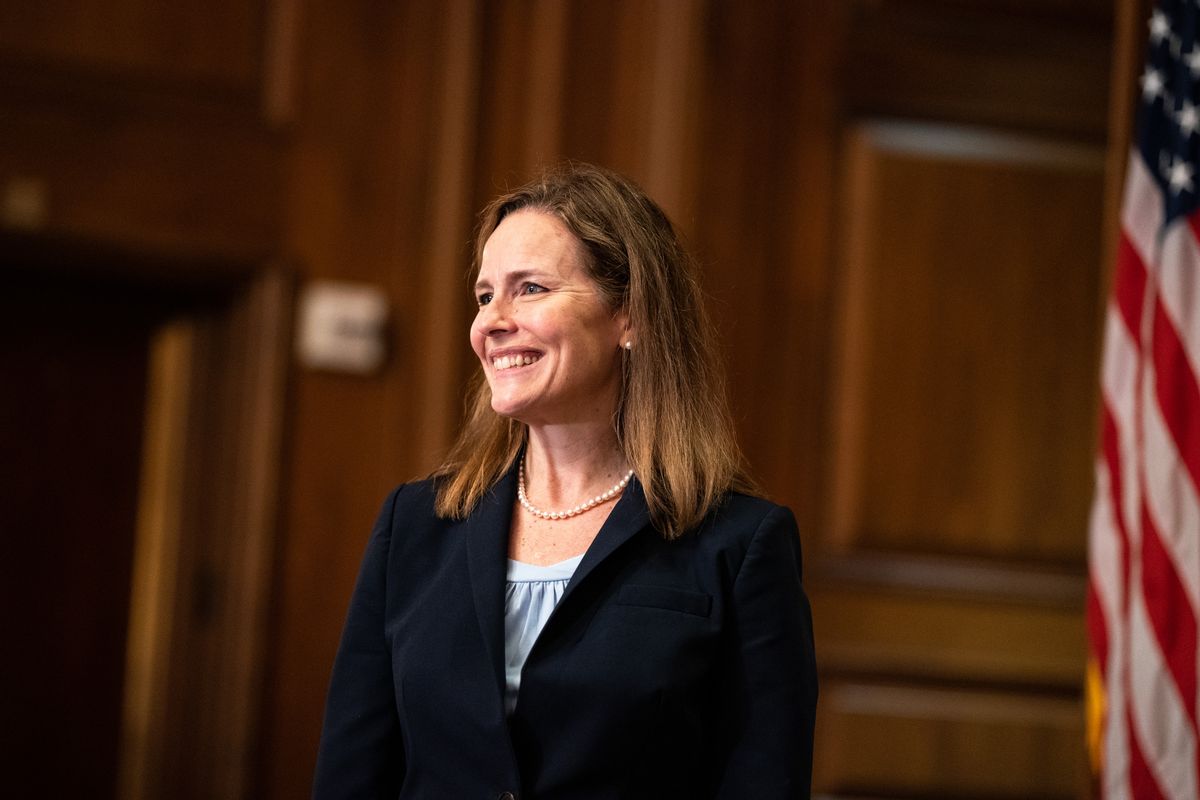 Claim:
U.S. President Donald Trump’s Supreme Court nominee Judge Amy Coney Barrett said that women should not be able to own, buy, or sell property without the permission of their husband or a male relative.
Rating:

Barrett is affiliated with People of Praise, a self-described “charismatic Christian community” whose teachings include the notion that “husbands are the heads of their wives and should take authority over the family.”

There is no public record, documentation, or media coverage quoting Barrett as having said that women should not be able to own, buy, or sell property without the permission of their husband or male relative.

In the wake of the September 2020 death of U.S. Supreme Court Justice Ruth Bader Ginsburg, a liberal icon described as a pioneer for women’s rights, U.S. President Donald Trump rushed to fill her vacant Supreme Court seat less than two months shy of the 2020 general election. Trump's Sept. 26 nomination of conservative-leaning Judge Amy Coney Barrett, a Catholic professor of law at the University of Notre Dame who sat on the 7th Circuit Court of Appeals in Chicago, sparked controversy and ignited the internet rumor mills.

Among those rumors was the claim that 48-year-old Barrett (who is inexplicably referred to as "Amy Barrett Cohen" in memes such as the one below) said women should not be able to own, buy or sell property without the permission of their husband or male relative. Barrett is affiliated with People of Praise, a self-described “charismatic Christian community” whose teachings include the notion that “husbands are the heads of their wives and should take authority over the family.” Since her widely publicized nomination, memes and social media reports of Barrett’s membership in the group sparked concern on social media over whether her religious leanings would influence her judicial rulings.

A September 2017 article in The New York Times first reported that Barrett was one of 1,700 members in the small, tight-knit group, whose practices include swearing a “lifelong oath of loyalty” — or covenant — to one another, which some legal scholars argued could raise questions about independence and impartiality in the courtroom. Despite evidence indicating longstanding ties between Barrett, her family, and People of Praise, neither she nor the group has publicly commented on their reported affiliation.

In September 2020, People of Praise website noted that the commitment is one made freely by its members:

Our community life is grounded in a lifelong promise of love and service to fellow community members. This covenant commitment, which establishes our relationships as members of the People of Praise community, is made freely and only after a period of discernment lasting several years. Our covenant is neither an oath nor a vow, but it is an important personal commitment. We teach that People of Praise members should always follow their consciences, as formed by the light of reason, and by the experience and the teachings of their churches.

A Sept. 29 investigation conducted by The Associated Press found that the faith group had scrubbed all mention and photographs of Barrett from its website in advance of her anticipated meetings with lawmakers. Sean Connolly, communications director of People of Praise, confirmed in an email to the publication that information had been wiped from the website.

"Recent changes to our website were made in consultation with members and nonmembers from around the country who raised concerns about their and their families’ privacy due to heightened media attention," Connolly said.

Snopes contacted Connolly, who agreed to an interview over email but did not respond to our questions at the time of publication. We also contacted the University of Notre Dame and were redirected to the White House Communications Office, but our interview request there also went unanswered. If we receive a response, we will update this article.

A story written by The Guardian went one step further when it speculated that the implications of a pro-life, conservative, and religious judge could be “far-reaching,” and may threaten a “life free of discrimination at work and school, or when buying property," particularly for women.

A journal article that was co-written by Barrett in 1997 titled Catholic Judges in Capital Cases compared abortion to euthanasia, a process often used in the death penalty, in particular, noting that the “Catholic Church’s opposition to the death penalty places Catholic judges in a moral and legal bind.” The paper further argued that prohibitions on abortion and euthanasia are “absolute” because they “take away innocent life.” In 2012, Barrett signed a petition condemning the Obama administration’s requirement of employers to provide employees birth control regardless of religious affiliation, according to a profile written by SCOTUSblog, a non-biased blog devoted to covering the U.S. Supreme Court.

Supporters of Barrett have called her a “model of the fair, impartial and sympathetic judge” while those who oppose her viewpoints argue that her religious affiliation will influence her legal decisions, particularly those regarding abortion and the speculated reversal of Roe v. Wade and the Affordable Care Act. Barrett has contended that her religious affiliations will not influence her court decisions, and during her nomination acceptance speech on Sept. 26 in the White House Rose Garden (see video below), she acknowledged the parallels between her application of law with former Justice Antonin Scalia, whom she spent two decades clerking for.

“His judicial philosophy is mine too: A judge must apply the law as written. Judges are not policymakers, and they must be resolute in setting aside any policy views they might hold,” Barrett said, adding that she “would discharge the judicial oath, which requires me to administer justice without respect to persons, do equal right to the poor and rich, and faithfully and impartially discharge my duties under the United States Constitution.”

The Standing Committee on the Federal Judiciary of the American Bar Association conducted its independent and comprehensive peer review of Barrett and determined that she was a “well qualified” fit for the lifelong position of Supreme Court justice. The Republican-majority Senate began four days of confirmation hearings on Oct. 12 and confirmed Barrett to the position on Oct. 26.

Weiss, Debra Cassens.   "Would Barrett Ax the Affordable Care Act? She Has Expressed Some Views; Severability is a Question Mark."     ABA Journal.   29 Sept. 2020

Update [Oct. 27, 2020]: This article was updated to reflect the ABA’s rating of Barrett, as well as the new justice’s confirmation to the Supreme Court.