Did an American Teenager Who Killed a 'Muslim Refugee' for Raping His Sister Get 30 Years in Prison? 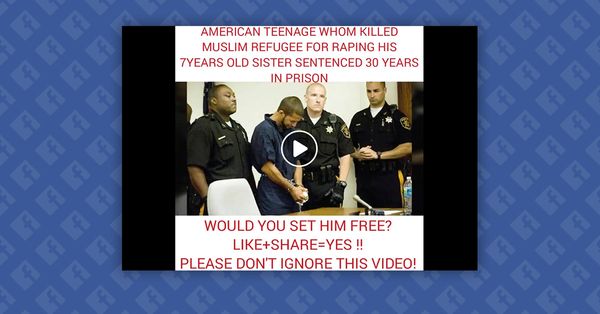 Claim:
An American teenager got 30 years in prison for killing a "Muslim refugee" who raped his sister.
Rating:

On 11 February 2018, an unofficial Facebook fan page dedicated to White House press secretary Sarah Huckabee Sanders posted a (since-removed) video with the obvious intent of spreading false information and hatred directed at Muslims. The video is adorned with poorly-written English captions that read as follows:

American teenage whom killed Muslim Refugee for raping his 7 Years Old Sister Sentenced 30 Years in prison!
Would You Set Him Free?
Dont ignore this video!
Share it :)

The video did not offer any specific information and was purportedly created by an outlet called "US Politics Info Center," which is a clickbait-driven, fake news web site.

The entire 20-second clip lacked anything resembling accurate information. Although the jumpsuit-wearing men depicted in it had been convicted of serious and vicious crimes, neither of them did what the video claimed of them. The apparent "American teenage," the sobbing young man in royal blue depicted in the video, was Dylan Schumaker, a 21-year-old man from New York state who in 2014 was sentenced to 25 years for beating his girlfriend's toddler to death.

The bearded man in darker blue who appeared in the video handcuffed with his head down was Osvaldo Rivera of New Jersey, who in 2014 was given a life sentence for raping a 12-year-old girl at knifepoint and murdering her 6-year-old brother when the child tried to save his sister. There was no indication of either his religion or his citizenship status in the reporting of his crimes, but the basic facts of his case would still be lacking any relevance to this video even if the badly written captions described them with anything approaching accuracy.

It is highly unlikely that the Facebook page with 10,000-plus fans dedicated to Sanders has any connection to her other than in name. We sent an inquiry to the White House press office but received no response.