Official statistics suggest that some of the online retail giant's workforce receive food stamps, but it only applies to about 12 percent of one state's employees. 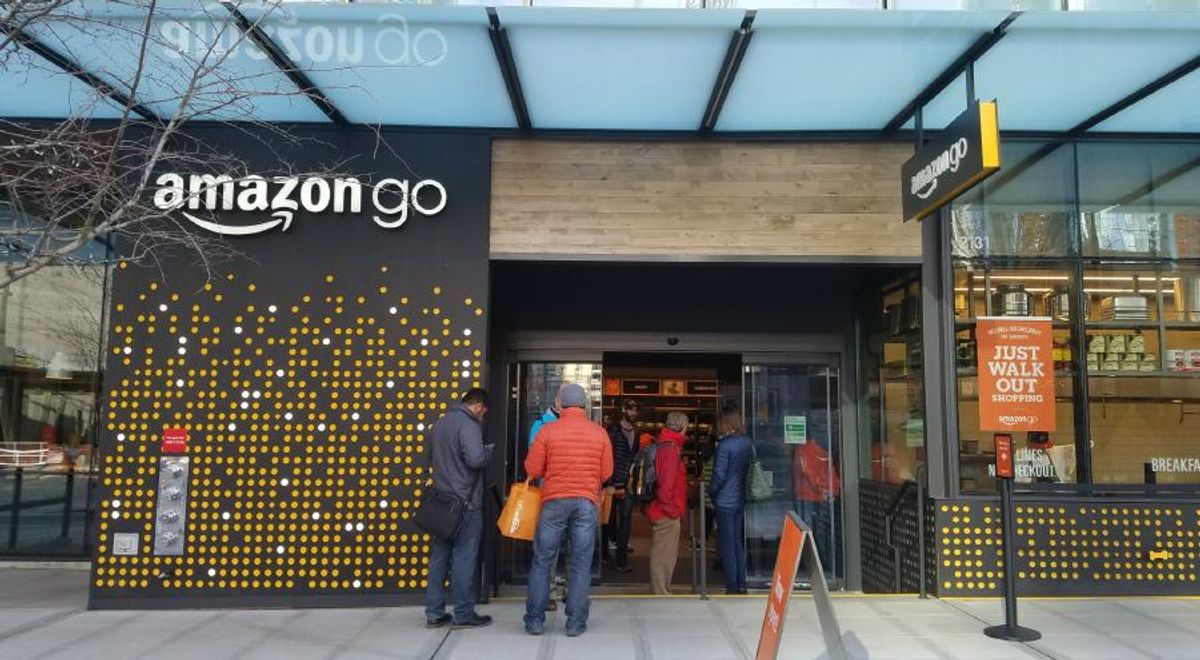 The 11.8 percent figure was only an estimate; was based on one single state; and income is not the sole factor that determines food stamp eligibility.

Jeff Bezos, founder and chief executive officer of online retailing giant Amazon.com, became the world's richest person in October 2017, according to Forbes magazine. And in January 2018, Bezos' company opened the first "Amazon Go" — a new kind of store with no checkout required — in Seattle, Washington, to considerable fanfare: Amid a wave of increased press coverage and scrutiny, a viral meme made a number number of claims about Amazon  in January 2018: A spokesperson for Amazon confirmed the fact that the company's new grocery store, Amazon Go, does not accept SNAP benefits or food stamps as a form of payment.

The source of the claim about Amazon workers receiving food stamps was a January 2018 report by the nonprofit group PolicyMatters Ohio, which estimated that roughly 700 Amazon workers in Ohio (more than 10 percent of the company's employees in the state) receive Supplementary Nutrition Assistance Program benefits:

As of last August, 1,430 Amazon employees or family members were getting assistance under the Supplemental Nutrition Assistance Program (SNAP), according to the Ohio Department of Job & Family Services.

In August, the average Ohio family receiving SNAP contained just more than two people. Based on that average, more than 700 Amazon workers received benefits that month, or more than one in every 10 of those Ohioans employed by the company.

PolicyMatters Ohio arrived at that estimate by finding the number of Ohio food stamp recipients who are part of a household where someone works for Amazon (1,430), then dividing that by 2.02 (the average size of a household on food stamps in Ohio at that time). The resulting estimate is about 700 workers, or 11.8 of Amazon's Ohio workforce. We were unable to find any research or data on Amazon workers' availing themselves of food stamps in other states.

PolicyMatters Ohio sent us figures to corroborate their claims, which they received from the Ohio Department of Job and Family Services. (That data is available for download in spreadsheet form here.) Further, whether or not an individual qualifies for food stamps is determined by more than just income. Having a gross monthly household income at or below 130 percent of the federal poverty limit is an important factor. However, you can also qualify for SNAP benefits with an income above the poverty limit if someone in your household is disabled or elderly, and the poverty limit is pro-rated depending on the size of your household.

Another factor to consider is whether a worker is employed by Amazon on a full-time or part-time basis. Someone whose only source of income was their part-time job at an Amazon fulfillment center would earn a lower monthly income than a full-time worker in a similar position, even if they received the same hourly wage.

This circumstance might well qualify someone for food stamps even if their hourly wage at Amazon were otherwise not too bad. In an email, an Amazon spokesperson told us that “Amazon full-time hourly employees in Ohio earn between $14.50 and $15 an hour as a starting wage with regular pay increases plus Amazon stock and performance based bonuses."

On 1 February 2018, Amazon's jobs web site listed seven open warehouse positions in Ohio. Only one was full-time, a description which a company spokesperson told us entails 40 hours of work per week. The hourly wage for the part-time jobs ranged from $10.50 to $11.75, while a "reduced time" position came with a starting rate of between $14.50 and $17 an hour. The full-time position had a starting hourly wage of between $14.50 and $15.

According to a major 2016 report by the non-profit Institute for Local Self-Reliance, a group that advocates for more sustainable community development, Amazon's warehouse workers across 11 metropolitan areas in the United States earned, on average, 15 percent lower than could be expected for a worker in that industry (page 39).

Amazon told us this analysis was "flawed," because it compared Amazon wages with "traditional warehouse jobs and compensation," claiming  that the appropriate comparison would be between Amazon wages and retail wages, because "that industry more closely resembles the environment of an Amazon fulfillment center."

Additionally, the report's authors said it was difficult to ascertain exactly what proportion of warehouse workers were on permanent contracts, and what proportion were temps, but estimated (based on news reports and the industry average) that the permanent to temporary ratio was roughly 60/40.

A spokesperson for the company gave contradictory figures, saying: "Throughout the year on average, 90 percent of associates across the company’s U.S. fulfillment network are regular, full-time employees. That applies for states like Ohio." The spokesperson confirmed that "regular" means permanent. The ILSR criticized Amazon for using the label "seasonal" — which has connotations of the annual retail holiday rush — to describe the temporary positions it fills year-round.

Amazon has also previously come under fire for what have been described as difficult working conditions. In its 2016 report, the ILSR summarized employment at the company's fulfillment centers as "grueling work for lower pay than average":

Employees describe running across warehouses that sprawl the distance of 17 football fields; production quotas, or “rates,” that can be set 60 percent higher than the industry standard; and a disciplinary system that tracks workers’ every action and inflicts “points” for any deviation from Amazon’s standard.

Underlying these conditions is Amazon’s fundamental approach to its warehouse workers. The company’s warehouses are finely-tuned machines, and the company creates conditions such that its workers are expected to be parts of that machine. The result is a work environment that is profoundly dehumanizing.

In response to these descriptions, a spokesperson for the company told us:

Like most companies, we have performance expectations for every Amazon employee and we measure actual performance against those expectations. Associate performance is measured and evaluated over a long period of time as we know that a variety of things could impact the ability to meet expectations in any given day or hour. We support people who are not performing to the levels expected with dedicated coaching to help them improve.

While the meme says that Amazon grossed $128 billion in sales "last year," that number is not quite accurate. For one thing, Amazon's 2017 earnings had not yet been published in January 2018, when the meme was created. Instead, Grit Post, where the meme appears to have originated, said in a list of sources that they had used Amazon's 2016 numbers. Amazon actually had net (not gross) sales of $136 billion in 2016, according to the company's full year financial results. This means gross sales (which were not reported) were even higher than that, and certainly higher than the $128 billion claimed in the meme.

Amazon's sales for 2017 are likely to be astronomical. Based on the company's predictions for the final three months of the year, Amazon's full-year net sales in 2017 might reach around $178 billion.