Was 'Amazing Grace' Penned By a Repentant Slave Trader?

The inspiration for this well-known piece of sacred music purportedly struck after a life-altering brush with death at sea. 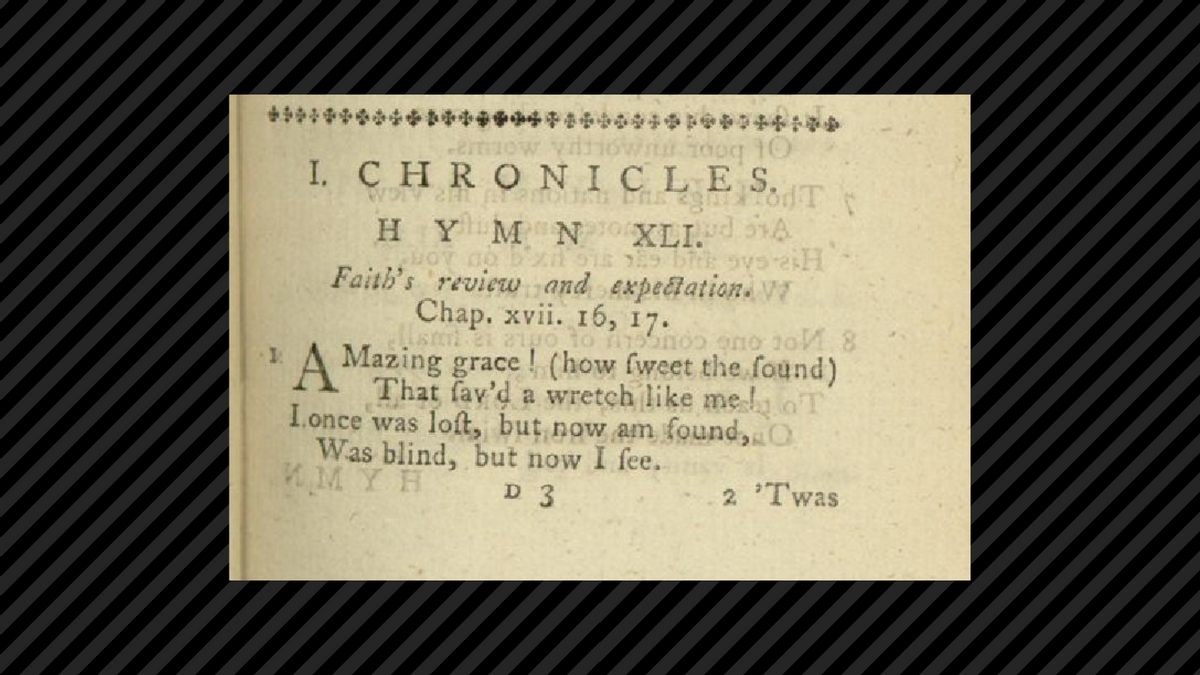 Claim:
Having survived a horrific storm, a slave trader promptly gave up his livelihood, became a Christian, and penned the hymn 'Amazing Grace' in thanksgiving.
Rating:

Amazing Grace was penned by a former slave trader, but only many decades after he’d left slave trading and seafaring behind and had become a minister of God.

It is not true that he wrote the hymn immediately after surviving a horrific storm at sea that prompted him to foreswear his former evil ways and accept God into his life.

A number of legends circulate about why John Newton, a slave-trader-turned-minister, penned the hymn 'Amazing Grace.' Most attempt to explain the seemingly inexplicable: How could one who made his living trading in the misery of others have put into words such a powerful message of personal salvation?

Someone told me that that the words to "Amazing Grace" were written by the captain of a slave ship in the 1880s. He was bringing a large supply of slaves, to the US, when he suddenly became inexplicably wracked with guilt over this chosen profession, and ordered that the ship be turned back to Africa, and all the slaves freed. He then wrote the words to "Amazing Grace" to explain the epiphany which caused him to abandon his trade.

I was born in 1725, and I died in 1807. The only godly influence in my life, as far back as I can remember, was my mother, whom I had for only seven years. When she left my life through death, I was virtually an orphan. My father remarried, sent me to a strict military school, where the severity of discipline almost broke my back. I couldn't stand it any longer, and I left in rebellion at age of ten.

One year later, deciding that I would never enter formal education again, I became a seaman apprentice, hoping somehow to step into my father's trade and learn at least the ability to skillfully navigate a ship. By and by, through a process of time, I slowly gave myself over to the devil. And I determined that I would sin to my fill without restraint, now that the righteous lamp of my life had gone out. I did that until my days in the
military service, where again discipline worked hard against me, but I further rebelled. My spirit would not break, and I became increasingly more and a rebel.

Because of a number of things that I disagreed with in the military, I finally deserted, only to be captured like a common criminal and beaten publicly several times. After enduring the punishment, I again fled. I entertained thoughts of suicide on my way to Africa, deciding that would be the place I could get farthest from anyone that knew me. And again I made pact with the devil to live for him.

Somehow, through a process of events, I got in touch with a Portuguese slave trader, and I lived in his home. His wife, who was brimming with hostility, took a lot of it out on me. She beat me, and I ate like a dog on the floor of the home. If I refused to do that, she would whip me with a lash. I fled penniless, owning only the clothes on my back, to the shoreline of Africa where I built a fire, hoping to attract a ship that was passing by. The skipper thought that I had gold or slaves or ivory to sell and was surprised because I was a skilled navigator. And it was there that I virtually lived for a long period of time. It was a slave ship it was not uncommon for as many as six hundred blacks from Africa to be in the hold of the ship, down below, being taken to America.

I went through all sorts of narrow escapes with death only a hair breath away on a number of occasions. One time I opened some crates of rum and got everybody on the crew drunk. The skipper, incensed with my actions, beat me, threw me down below, and I lived on stale bread and sour vegetables for an unendurable amount of time. He brought me above to beat me again, and I fell overboard. Because I couldn't swim, he harpooned me to get me back on the ship. And I lived with the scar in my side, big enough for me to put my fist into, until the day of my death.

On board, I was inflamed with fever. I was enraged with the humiliation. A storm broke out, and I wound up again in the hold of the ship, down among the pumps. To keep the ship afloat, I worked alone as a servant of the slaves. There, bruised and confused, bleeding, diseased, I was the epitome of the degenerate man.

I remember the words of my mother. I cried out to God, the only way I knew, calling upon His grace and mercy to deliver me, and upon His Son to save me. The only glimmer of light I would find was in a crack in the ship in the floor above me, and I looked up to it and screamed for help.

God heard me. Thirty-one years passed, I married a childhood sweetheart. I entered the ministry. In every place that I served, rooms had to be added to the building to handle the crowds that came to hear the Gospel that was presented and the story of God's grace in my life. My tombstone above my head reads:

Born 1725, died 1807
A clerk, once an infidel and libertine, a servant of slaves in Africa, was by the rich mercy of our Lord and Savior, Jesus Christ, preserved, restored, pardoned, and appointed to preach the faith he once long labored to destroy. I decided before my death to put my life's story in verse. And that has become this song.

As is common with any number of music legends about particular songs, some will always look to events in the writers' lives that might have sparked such compositions. Thus are born tales of wild storms and pacts with God, as are stories about religious awakenings that prompted a slaver to set his cargo free. But the truth is far less poetic: 'Amazing Grace' is a song about salvation, but it wasn't composed until long after its writer had left his seafaring days behind him and become a minister.

John Newton (1725-1807) first worked as a slave buyer in Africa and later moved on to the position of captain on slave ships. He continued to make his living in the slave trade after becoming a Christian at the age of 23 in 1748. A violent storm at sea brought about his commitment to Christianity, but it was escaping with his own life that inspired him to get religion, not guilt over enslaving others. (Though this event is often pointed to as "the" conversion, it really was only the first of many such pacts with the Almighty struck by Newton, each one brought about by his close shaves with death.)

Newton quit the sea (and the slave trade) in 1754 or 1755. He did not free any of his merchandise on that 1748 trip, or on any others. Though he might have become a Christian, he did not yet allow it to interfere with his making a living.

In 1754 or 1755, he became a Tides Surveyor in Liverpool (a form of Customs Officer charged with searching for contraband and paid with half the swag taken from others). It was at this point Newton first began to express an interest in the ministry, but at the time was unable to decide between the Methodist and Anglican faiths. He was ultimately ordained as a priest in the Church of England in 1764.

Newton most likely composed 'Amazing Grace' in 1772, although there is no clear agreement on the date. According to one biographer, the hymn was penned along with a great many others during an informal hymn-writing competition he was having with William Cowper, another noted hymn writer. If so, that casts doubt upon this particular composition's being solely a cathartic outpouring of wonder over the Lord's mercy — there are, after all, only so many themes that can be expounded upon in a hymn, and personal salvation is one of them.

Newton began to express regrets about his part in the slave trade only in 1780, thirty-two years after his conversion, and eight years after he wrote 'Amazing Grace.' In 1785 he began to fight against slavery by speaking out against it, and he continued to do so until his death in 1807.

Thus, the bare bones of the story are true: a former slave trader did compose one of the most moving hymns of our times. But the meat of the claim — that a horrific event spurred a sinner to immediately repent his evil ways, penning 'Amazing Grace' as an expression of his repentance — fails on the facts. Newton's storm-driven adoption of Christianity didn't change him all that much; he continued to make his living from the slave trade for many years afterward and only left the trade when his wife insisted upon their living a settled life in England. (Indeed, less than a year after his storm-driven conversion, Newton was back in Africa, brokering the purchase of newly-captured blacks and taking yet another "African wife" while there. He was hardly the poster boy for the truly penitent, at least at that point in his life.)

Newton did eventually grow into his conversion so that by the end of his days he actually was the godly man one would expect to have penned 'Amazing Grace.' But it was a slow process affected over the passage of decades, not something that happened with a clap of thunder and a flash of lightning. In Newton's case, the "amazing grace" he wrote of might well have referred to God's unending patience with him.

Still, Newton's story gives us all hope — even the greatest of sinners can ultimately and meaningfully repent, and even the most half-hearted of conversions can overtime work its magic.

Sightings:   A January 2004 New York Times article about President George W. Bush's State of the Union Address said, "Some listeners detected an allusion to a passage in 'Amazing Grace,' the hymn written by a slave trader turned minister and abolitionist, John Newton, after he survived an Atlantic storm."