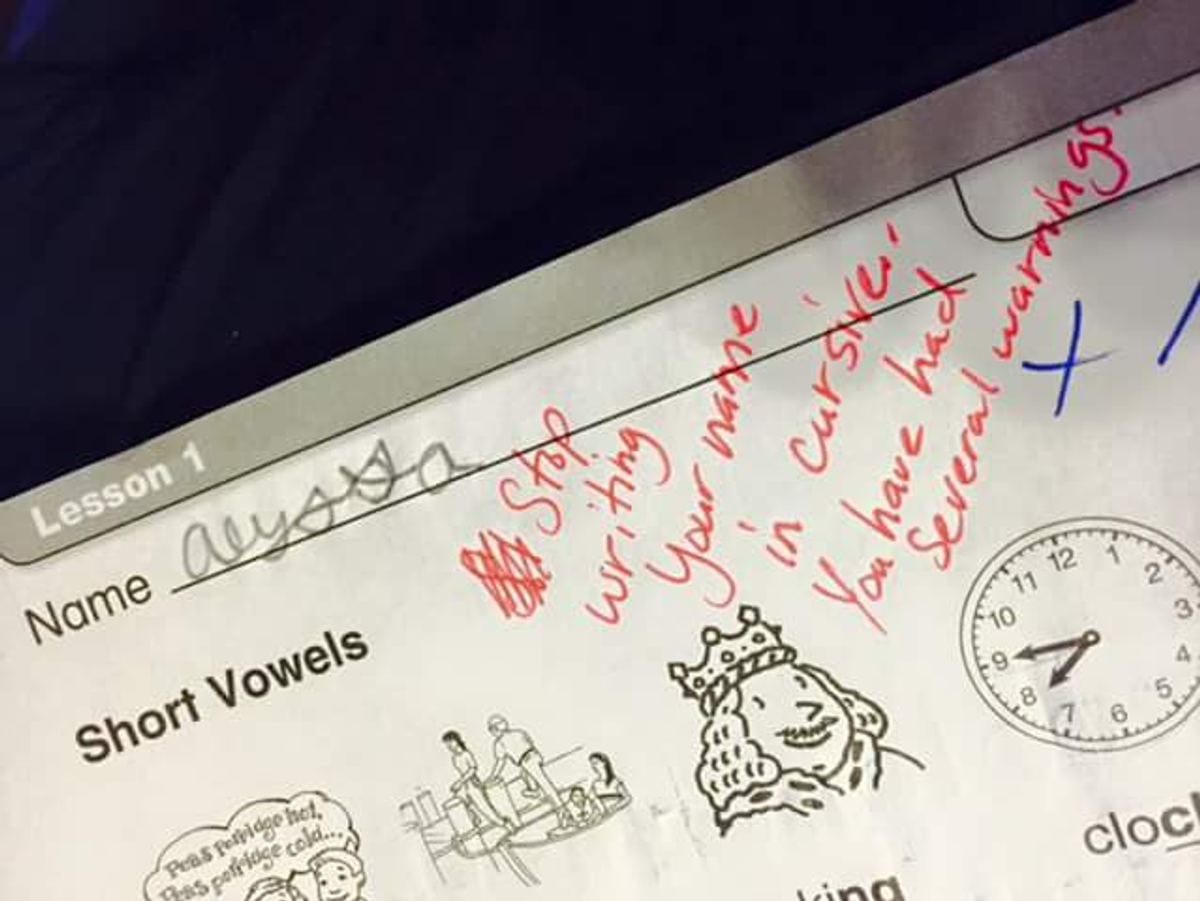 FACT CHECK   Was a Kansas schoolgirl named Alyssa sharply reprimanded by a teacher for writing her name in cursive?

Claim:   A Kansas schoolgirl named Alyssa was sharply reprimanded by a teacher for writing her name in cursive.

This photo is circulating around FB claiming that a teacher reprimanded a student for writing her name in cursive on her assignments. I find it a bit hard to believe...

Here is what she posted with the photo:

"Share this everywhere... Alyssa is 7!!! Not only is her mother a military veteran but, she took the time to teach her very young child how to write in cursive... This is her teacher's response... What is wrong with today's school system/society??? #cursive"

Origins:   On 16 September 2015, Facebook user Brenda Hatcher published the photograph displayed above along with the following text:

Share this everywhere... Alyssa is 7!!! Not only is her mother a military veteran but, she took the time to teach her very young child how to write in cursive... This is her teacher's response... What is wrong with today's school system/society??? #cursive

Hatcher's request that Facebook users "share this everywhere" was apparently heeded, as the photograph and lament racked up more than a quarter of a million shares in just a few days. However, her call to action and the target of her frustration remained difficult to discern in the context presented. Was the image share-worthy because of the teacher's firm tone? Was it because the utility of handwriting has declined in an era of increasingly computer-based communication? Should the teacher have been softer with the child of a veteran?

A report by Philadelphia television station WTXF publicized the story, which was itself largely aggregated from the blog PopSugar. However, neither of those articles added much of any information about the claim or the people it involved. In the comments section of her Facebook post, Hatcher provided a scant few additional details: She identified the mother of the child as a woman named Gail Varney and tagged her, and she later referenced "awareness" but again did not specify what she believed fellow Facebook users ought to be aware of:

Thank you for all the shares everyone! It's definitely raising some awareness... I'd also like to know what the teacher's punishment was going to be... I mean, really??? What are you gonna do Mrs. Teacher? Suspend her from school for being 7 and able to write in cursive? Does she not get to go out for recess??? What a joke.

In a subsequent post Hatcher stated that the image was reported to Facebook for nudity, separately saying the teacher "claim[ed Alyssa] can't write in cursive because the other students don't know how to do that yet" and adding:

I don't know who the teacher is or the school. The mother wants that information to remain private ... She's taking measures into her own hands. I can assure you that she's doing all she can.

It's difficult to imagine which necessary "measures" Alyssa's mother would take: schoolwork is commonly dictated by reasonable instructions (such as requiring printing or cursive writing) issued by teachers for their assignments. While Hatcher's claims about Alyssa and a teacher's red-ink remarks concerning the use of cursive have proved popular on Facebook, the precise nature of the controversy remains something of a mystery despite its viral penetration.

From the little disclosed by Hatcher, the teacher's remarks indicated that the child was previously asked not to use cursive to write her name. Hatcher indicated Alyssa was seven at the time of the controversy, placing her in first or second grade (a detail she said the girl's mother wished not be included). Recent statewide educational standards in Kansas provide for the introduction of cursive in third grade, so the use of cursive before a class has broached it formally may be frowned upon, as incorrect usage at the introduction stage could potentially inhibit the classroom's ability to develop correct form.

Subsequent comments from Hatcher did little to explain whether users ought to be outraged over the general topic of cursive, the treatment of veterans' kids, or a heretofore not articulated offense visible only to those bothered by it (of whom there are presumably more than 300,000). We contacted Hatcher to see if she would share any corroborating details (or information about the issue requiring "awareness") but have not yet received a response.