Can Alligators Live in Sewers?

It's amazing what a little digging will uncover. 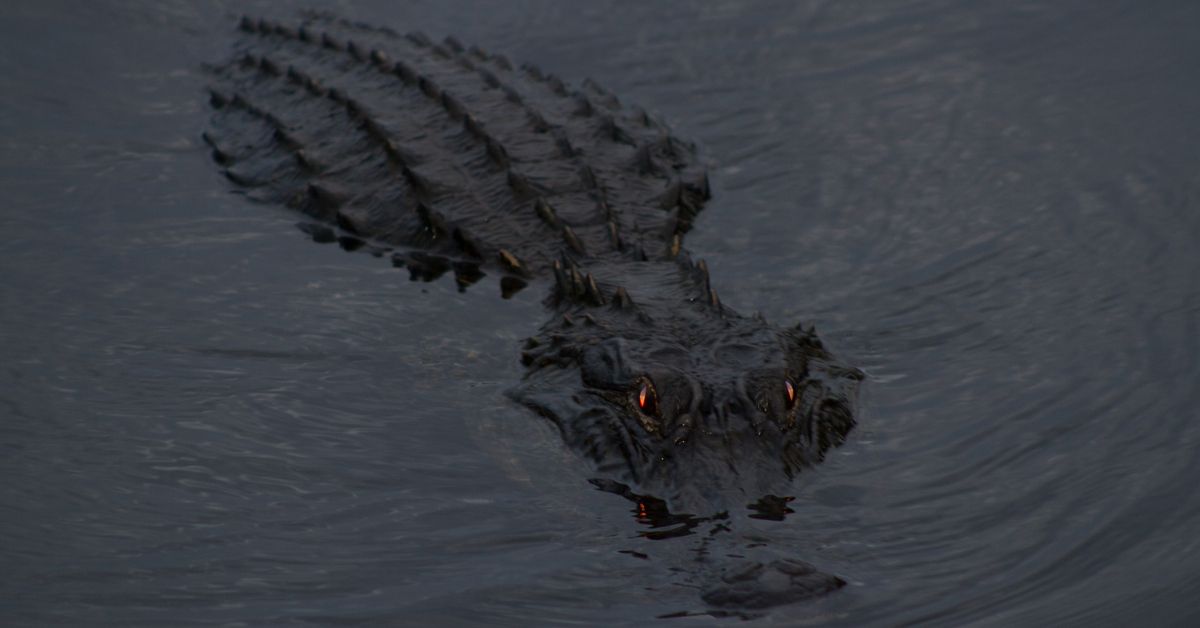 Claim:
A thriving colony of large alligators lives deep within the bowels of the New York City sewer system.
Rating:

It's long been rumored there are thriving colonies of alligators lurking in New York City's sewer system. Supposedly, baby alligators brought back as pets from Florida end up being dumped into the sewer system when they outgrow their young and innocent stage. From such an inglorious beginning, these discarded gators grow to immense size and daily terrorize all those foolish enough to risk a visit to the bowels of the city.

We've all heard it. And it ain't true.

It's amazing who believes in those invisible alligators too. As the Director of the New York Sea Grant Institute in Albany) said to The New York Times in 1982: "No less a source than All the New That's Fit to Print reported a veritable rash of 'saurian sightings' in the city sewers through the 1930's."

You know, if you stopped right there, you might walk away from all this convinced there are alligators down there. But it's amazing what a little digging will uncover (or, in this case, not uncover).

Figuring any "alligators in our sewers!" story would be considered newsworthy by the New York press, I went through The New York Times index from 1905 to 1993 in search of alligator stories. Then I located each story on microfilm. Here's a summary of what I found:

September 4, 1927:
A "good-sized Florida alligator" found in a storm-swollen stream in Middletown, NY. "It was later discovered that the alligator had escaped several months ago from a pan on the premises of Dr. F.E. Fowler."
July 3, 1929:
2-foot alligator found in the grass at someone's home in Port Jervis, NY.
May 22, 1931:
Another 2-foot gator found in the bushes on someone's estate in Pleasantville (Westchester), NY.
June 30, 1932:
Police organize alligator hunt in Westchester County after two boys bring in 3-foot dead alligator and claim the Bronx River is swarming with them. (See the end of this article for excerpts from this story — too funny to miss.)
July 2, 1932:
The alligator hunt was called off after it was decided the boys had seen snakes or lizards in the river, not gators. The dead "gator" they'd brought in was identified as a pet crocodile which had escaped from a neighbor's backyard a few weeks prior to all the excitement.
September 12, 1933:
"A squadron of riflemen was organized here [Belleville, NJ] today to hunt for alligators in the Passaic River. . . . Belleville police said it is probable the alligators were some of the six reptiles which disappeared last year from a lagoon in Military Park, Newark."
February 10, 1935:
Boys shoveling snow into a manhole discovered a 6-foot gator trying to make his escape from the sewer. The boys lassoed the sickly saurian with a clothesline and dragged him up to street level. Because the gator snapped at the kids (and thus convinced them he could indeed be dangerous), they attacked him with shovels and killed him. Speculation was the gator had fallen off a passing steamer, swum to shore and found the entrance to the sewer.
March 8, 1935:
A seal and two alligators turn up in Westchester County. "A 3-foot gator was found in Northern Yonkers by Joseph Domomico yesterday morning. Another twice that size was found, dead, on the east side of Grassy Sprain reservoir."
June 1, 1937:
A barge captain captures a 4-foot alligator in the East River. The gator "was clearly exhausted and seemed in no humor to fight."
June 7, 1937:
"Passengers waiting on the eastbound platform of the Brooklyn Museum station of the I.R.T. subway just before midnight were startled by the sudden appearance of a 2-foot alligator which had emerged from a refuse can." As to how the beastie might have gotten in there, "Passengers on the station told the police that shortly before the alligator appeared a man put a large bundle in the refuse can."
August 16, 1938:
Five alligators caught in Huguenot Lake (Westchester, NY), the largest of which was 19 inches.
August 17, 1942:
A 4-foot alligator (thought to have escaped from an outdoor aquarium in a local home) was found in Lake Mindowaskin (Westfield, NJ).
August 12, 1982:
A 26-inch alligator was found swimming in Kensico Reservoir, (in Westchester, NY) part of the New York City water supply system.

All these alligators found in and around New York City, but only one had turned up in a sewer. (Mind you, Westchester County looks like a fine place to avoid if you're not saurianly inclined — every second gator story seemed to come from there.) Not surprising either, for alligators thrive in Florida and it's hard to believe creatures that accustomed to a warm climate would survive in the NY sewer system. A New York winter is hard on native New Yorkers; I wouldn't think a colony of gators would stand a chance in that cold.

Nature writer Diane Ackerman has this to say about alligators' longevity under those conditions:

But they couldn't survive for any length of time in the sewers, only a few months at the most, because they can't live long in salmonella or shigella or E. coli, organisms that one usually finds in sewage. Also, alligators live at temperatures between 78 and 90 degrees . . .

Despite the dearth of news stories about NY alligators and in the face of what we know about how gators are put together, the "alligators in the New York sewer system" stories persist. Most of the blame for this tale's persistence should be assigned to Robert Daley's 1959 World Beneath The City. In it, Daley passes along a tale from Teddy May, New York's superintendent of sewers until 1955. According to the book, sewer inspectors first reported seeing gators around 1935, but May did not believe them. He went himself into the sewers and afterwards:

He sat at his desk screwing his fists into his eyes, trying to forget the sight of alligators serenely paddling around in his sewers. The beam of his own flashlight had spotted alligators whose length, on the average, was about two feet . . . The colony appeared to have settled contentedly under the very streets of the busiest city in the world.

According to that book, these alligators were dispatched by various means including being poisoned, shot, or herded into the trunk mains where currents washed them out to sea.
<!-- This massive alligator hunt wasn't reported in the popular press, yet as we've seen, The New York Times will publish just about anything that has to do with alligators in or around New York. As well, World Beneath The City doesn't give a date for the supposed occurrence; all it says is Teddy May first heard gator reports in 1935. The date of his visit to the sewers or the extermination of the alligators is not provided.

Daley spoke to May in 1959 (when May was 84 years old and 20-odd years after the alligators were supposedly discovered and dispatched down there).

The details are a bit too fuzzy and there's a decided lack of outside confirmation. May's story is best regarded as a fanciful tale. As for how seriously to take May, according to a 1992 magazine article, " . . . a sewer official told [folklorist Jan Harold] Brunvand that Teddy May was 'almost as much of a legend as the alligators,' a spinner of colorful yarns."

Each year at least half a dozen people ask New York City's Bureau of Sewers about those infamous gators. John T. Flaherty (Chief of Design) answers these inquiries routinely.

I could cite you many cogent, logical reasons why the sewer system is not a fit habitat for an alligator, but suffice it to say that, in the 28 years I have been in the sewer game, neither I nor any of the thousands of men who have worked to build, maintain or repair the sewer system has ever seen one.

Flaherty (whose sense of humor is of the dry yet deadly variety) added the one clear proof of the absence of alligators — not a single union official has ever advanced alligator infestation as a reason for a pay increase for sewer workers.

Even though it's next to impossible to prove something didn't happen, I would still suggest from the lack of credible sightings it's safe to assume there are no alligators down there.

The tall tale about thriving colonies of alligators lurking in New York's sewers finds an antecedent in another (at that time, at least) widely believed tale recorded in 1851 about feral pigs or hogs infesting the sewers in Hampstead [London]:

There is a strange tale in existence among the shore-workers, of a race of wild hogs inhabiting the sewers in the neighbourhood of Hampstead. The story runs, that a sow in young, by some accident got down the sewer through an opening, and, wandering away from the spot, littered and reared her offspring in the drain, feeding on the offal and garbage washed into it continually. Here, it is alleged, the breed multiplied exceedingly, and have become almost as ferocious as they are numerous.This story, apocryphal as it seems, has nevertheless its believers, and it is ingeniously argued, that the reason why none of the subterranean animals have been able to make their way to the light of day is, that they could only do so by reaching the mouth of the sewer at the river-side, while, in order to arrive at that point, they must necessarily encounter the Fleet ditch, which runs towards the river with great rapidity, and as it is the obstinate nature of a pig to swim against the stream, the wild hogs of the sewers invariably work their way back to their original quarters, and are thus never to be seen.

What seems strange in the matter is, that the inhabitants of Hampstead never have been known to see any of these animals pass beneath the gratings, nor to have been disturbed by their gruntings. The reader of course can believe as much of the story as he pleases, and it is right to inform him that the sewerhunters themselves have never yet encountered any of the fabulous monsters of the Hampstead sewers.

As a suitable finale, I present excerpts from a 1932 New York Times about police plans to stalk alligators they believed were living in a Bronx River lair:

. . . two small boys had appeared at headquarters last night to show the chief a dead alligator, about 36 inches long, which they said they had captured along the shore of the lake. The boys told the chief that the Bronx River, of which the lake is a part, had been 'swarming' with at least two or three other alligators.The start of the explorers

was delayed today because of fear on the part of the police chief that a species of human beings, known as baseball players, who congregate on the shores of the lake, would interfere with the expedition.

A hurried visitor to Police Headquarters told the police chief that a piece of liver would make an alligator literally walk across the water to shore and that it could be captured alive easily with the type of net generally used by butterfly chasers.

The police chief put in a requisition for enough liver to feed a good-sized alligator, and one of his men promised to lend the explorers a fishing net for the expedition.