"No one is being blocked from anything," according to officials in Allegheny, Pennsylvania. 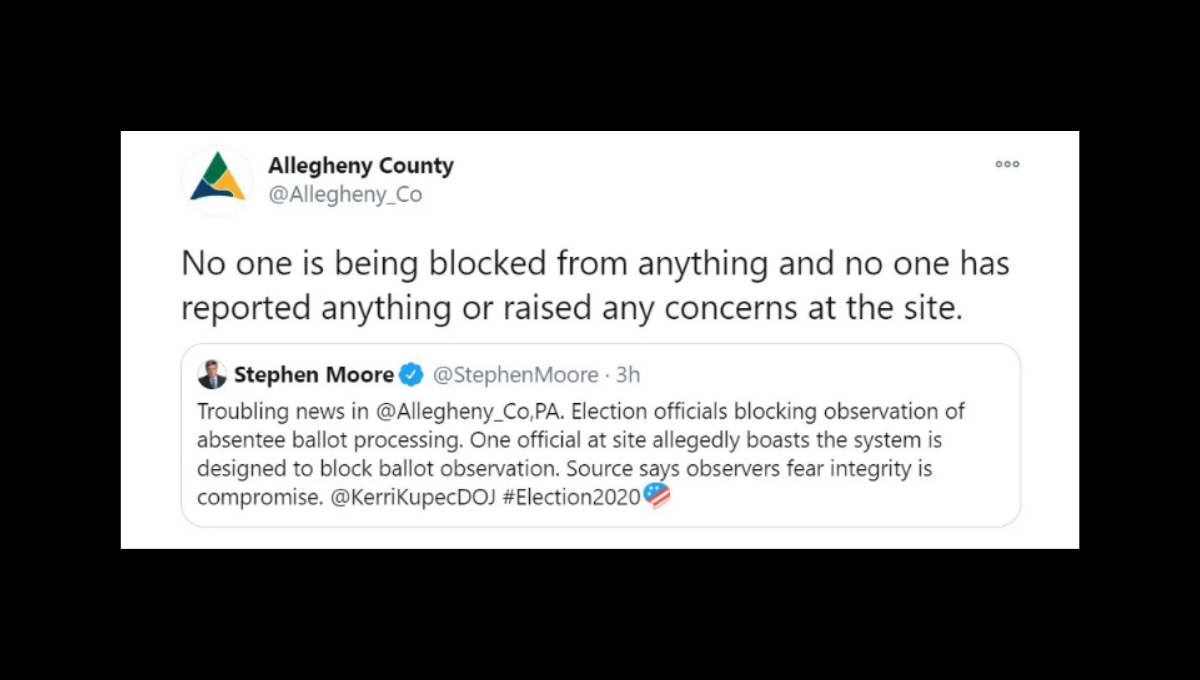 Claim:
Are election officials in Allegheny, Pennsylvania, blocking the observation of absentee-ballot processing?

On Nov. 3, 2020, a rumor started to circulate on social media that election officials in Allegheny, Pennsylvania, were blocking the observation of absentee-vote processing. This unverified rumor prompted baseless speculation that officials could nefariously alter the vote since they were no longer being observed counting absentee ballots: This claim was dismissed by officials in Allegheny County, however, who wrote on Twitter, "No one is being blocked from anything."

Pennsylvania appears to be the target of some misinformation campaigns related to Election Day. Earlier today (you can view our live blog of Election Day fact checks here) we investigated another claim holding that a Philadelphia polling place was violating election laws by displaying an illegal sign. The Philadelphia District Attorney said that claim was "deliberately deceptive."

Conservative media influencers and Republican political operatives are tweeting misleading videos and photos from polling places, making dubious claims of election rigging from the battleground state of Pennsylvania. Several tweets have been shared tens of thousands of times.

Although we haven't yet been able to definitively determine whether Moore's claim about Allegheny is accurate or authentic, we have observed that it has certain traits that are often indicative of misinformation:

It should also be noted that individual anecdotes do not signify widespread problems. It's possible that occasional problems will occur throughout Election Day, but that those problems will be rectified without large ramifications.