On video, Jones was screaming and pointing at a vehicle carrying children, but doing little else. 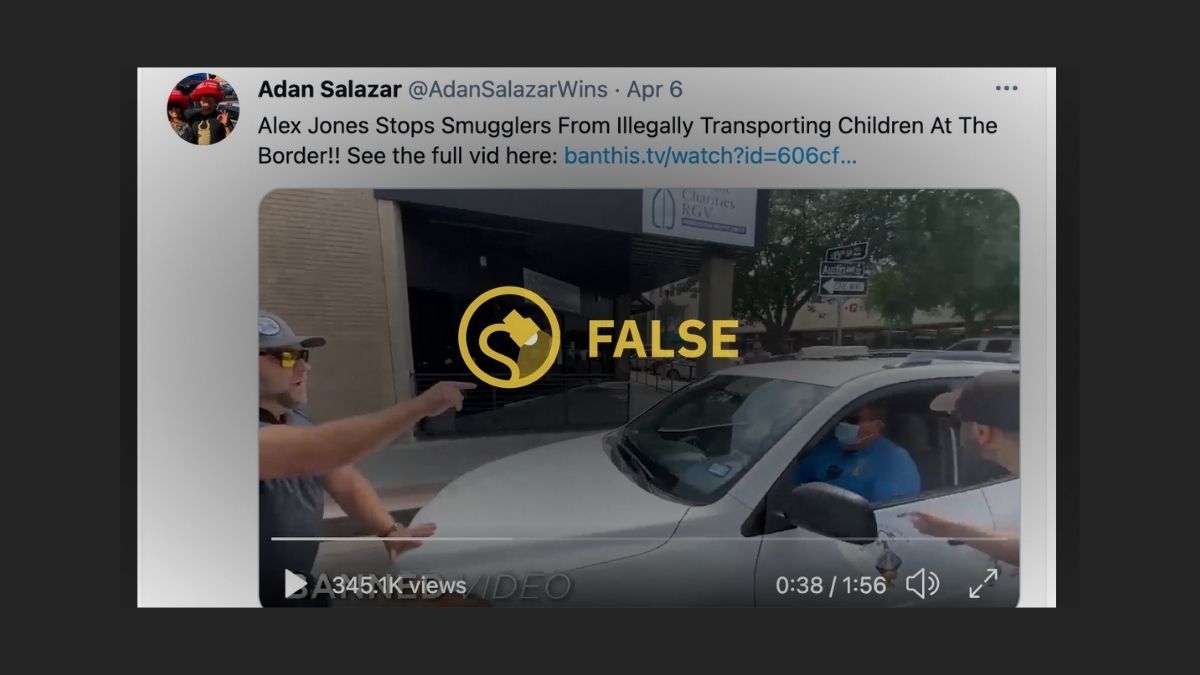 Claim:
Conspiracy theorist Alex Jones saved children from smugglers who were illegally transporting them at the border.
Rating:

On April 7, 2021, conspiracy troll Alex Jones planted himself, shouting and pointing, in front of a vehicle carrying several small children in McAllen, Texas, at a site where Catholic Charities was providing aid to migrants who had crossed the border.

"Alex Jones Stops Smugglers From Illegally Transporting Children At The Border!!" tweeted an Infowars editor. "WATCH: Alex Jones Physically Stops Vehicle After Witnessing Migrant Children Being Stuffed in the Luggage Compartment," read the headline of an article on the conspiracy site Gateway Pundit.

But the video in question doesn't show Jones rescuing anyone, let alone "smugglers" who were "illegally transporting children" at the border.

According to Infowars, the video was taken in front of Catholic Charities in McAllen, Texas. That charity organization operates a Humanitarian Respite Center in at that location, where migrants can find shelter and rest during their journey. The video shows Jones placing himself in front of a vehicle driven by a man with "STAFF" written across the back of his shirt, and with several small children inside. Jones and other men surround the car and start shouting at the driver.

When someone accompanying Jones yells at the man to ask where he's taking the children, the man responds, "they're going to check the COVID over there," pointing behind him. According to Border Report, a news outlet that reports from the U.S.-Mexico border, a COVID-19 testing station is located near the Catholic Charities respite center.

In a statement sent by email to Snopes, Pimentel blasted Jones and company, calling the video "a contrived misrepresentation of the work of Catholic Charities of the Rio Grande Valley." She continued, in part:

The video clip is a staged confrontation interrupting the goodwill of someone providing assistance in the form of transportation for three mothers and their children to the Humanitarian Respite Center. Ideally, the children should have been wearing seatbelts; unfortunately, this was not the case in this instance. The Humanitarian Respite Center and Catholic Charities of the Rio Grande Valley are not involved in any human smuggling or trafficking networks, but instead have worked tirelessly with Presidents Obama, Trump and Biden and their administrations as well as with local elected leaders to ensure that all asylum-seeking and citizen families alike are treated with human dignity and given clean clothes, food, and a moment of rest at the Humanitarian Respite Center.

I want to express my deep concern and disappointment regarding this attempt to sensationalize the work of Catholic Charities of the Rio Grande Valley and so many in the city of McAllen who have consistently worked together to provide humanitarian assistance to the most vulnerable.

Pimentel told Snopes in an email that police at the scene didn't cite the driver but issued him a warning over the lack of seatbelts, and had the migrants wait at the Humanitarian Respite Center for another driver to transport them for COVID-19 testing.

Jones is currently being sued for defamation by the parents of children murdered in the 2012 Sandy Hook Elementary mass shooting in 2012, after a years-long campaign by Jones to convince his followers that the shooting in Newtown, Connecticut, in which 20 small children and six school staffers were slain, was a hoax and all the people involved were actors.

We put in a phone call to police in McAllen, Texas, and will update this story when we hear back.

Updated to include statement from Sister Norma Pimentel, who runs Catholic Charities of the Rio Grande Valley.