A viral Facebook post purported to provide information about the life of Turing, including details about his sexuality, war efforts, death, and inspiration. 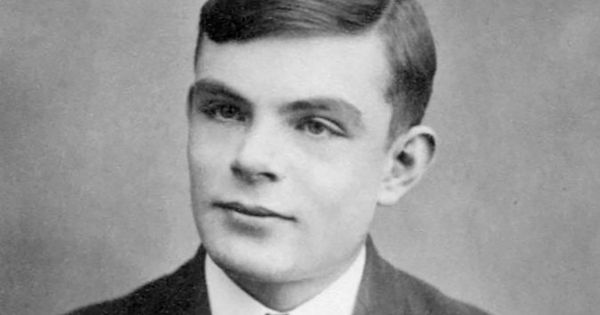 A viral Facebook post made several claims about the life and death of Alan Turing including that he died by suicide and that he inspired the Apple computer company's logo. (Image Via Wikimedia Commons)

Claim:
A popular Facebook post about the life and death of British mathematician Alan Turing is truthful.
Rating:

The popular Facebook post got most of the facts right. However, there's no evidence that Turing inspired the design of the Apple computer company's logo. Also, Turing's death in 1954 deserves further examination than what was provided in the post, which we included below.

In June 2022, a Facebook post went viral about the life of British mathematician, logician, and cryptographer Alan Turing, including several claims such as a rumor about why a bite is taken out of the design of the Apple computer company's logo. The post became so popular that we noticed some Google users had started looking to see if its contents were true, searching for Turing with the word "Snopes." Additionally, we also received inquiries from several readers that asked about the veracity of the claims.

According to the Facebook post, Turing ended his own life in 1954 by eating an apple laced with cyanide poison, purportedly a final act carried out by the computer scientist after the way he was treated by the British government for being gay. The post also said that Turing saved millions of lives during World War II and even served as the inspiration for the Apple logo. We found that most of the claims in the post were true, for reasons we'll outline below.

The viral copied-and-pasted Facebook post about Turing's life, which we refer to as "copypasta," read as follows:

A final thought for Pride Month 2022.

This is Alan. Alan ended his own life on 7th June 1954. He laced an apple with cyanide and ate a bite from it. He did this because the British government chemically castrated, humiliated and prosecuted him for being gay.

Alan is the reason why a chunk is bitten out of the Apple logo…in honour of Alan Turing.

Ok so what did he do? He invented computer science and using his first designs he decrypted the Enigma code -- the machine base encryption that the Nazis and the German military used to communicate secret commands to each other in world war 2 -- and hence he both saved millions of lives and brought us into the modern age of computing.

Pride month isn’t just about dancing on floats in gold hot pants or flying a rainbow flag. It’s about remembering that everyone has a right to be happy, love who they want to love, and recognise the outstanding contribution that everyone can make in a society free of fear or prejudice.

An alternate version of this post began with the words, "Celebrating Pride Month 2022."

It's true that Turing died at the age of 41 on June 7, 1954. His death was originally ruled to be a suicide. However, decades later, the circumstances surrounding his passing were called into question.

First, we'll look to reporting from The Guardian newspaper that was published four days following his death. On June 11, the paper printed that a pathologist and a coroner both concluded that Turing had died by suicide:

A verdict that Alan Mathison Turing (41), of Hollymead, Adlington Road, Wilmslow, committed suicide by taking poison while the balance of his mind was disturbed was returned at the inquest at Wilmslow last night.

John Ferrier Turing, of West Road, Guildford, a solicitor, said his brother was a Reader at Manchester University and a Fellow of the Royal Society, whose work was with the computing machine. His brother was always in the best of health and as far as the witness knew had no worries or financial difficulties. He had accepted an invitation from the Royal Society to attend a conversazione on June 24.

Police-Sergeant Cottreil said he saw Dr. Turing lying in bed with the clothes pulled up toward his chest. There was a white frothy liquid about the mouth with a faint smell of bitter almonds. On a table at the side of the bed was half an apple from which several bites had been taken.

The witness said that in another room he found a cooking pan with a double container which was connected to wires. The contents of the pan were bubbling and there was a strong smell of bitter almonds.

Dr. C. A. K. Bird, a pathologist, said that Turing's death was caused by asphyxia due to cyanide poisoning. A man of Dr. Turing's knowledge could not have swallowed it without knowing what would happen, and Dr. Bird did not think it could have been accidental. He thought the apple was used to take away some of the taste.

The Coroner Mr. J. A. K. Ferns remarked that he was forced to the conclusion that it was a deliberate act for, with a man of that type, one would never know what his mental processes were going to do next. He might easy become unbalanced and unstable and the Coroner thought his mind had become unbalanced when he decided to end his days.

Jack Copeland, a distinguished professor at The University of Canterbury, told the BBC in 2012 that Turing's death may have been an accident, citing various data that led him to believe he may not have purposely taken his own life. The reporting also said Copeland believed "the evidence would not today be accepted as sufficient to establish a suicide verdict."

The Facebook post claimed that Turing killed himself "because the British government chemically castrated, humiliated, and prosecuted him for being gay." We found that this information about the government's treatment of Turing was true. A statue of Alan Turing sits in Sackville Park in Manchester's Gay Village on February 1, 2017, in Manchester, England. (Photo by Christopher Furlong/Getty Images)

According to reporting from PBS NewsHour, Turing's death in 1954 came just two years following him being outed as gay. At the time, homosexuality was a crime:

In 1952, [Turing] was arrested and charged with “indecency” after a brief relationship with another man. Defiant, he did not deny the charges.

“When he was arrested, the first thing he said was he thought that this shouldn’t be against the law,” [said Andrew Hodges, a mathematician at the Mathematical Institute at Oxford University.] “He gave a statement that was unapologetic, that detailed what had happened.”

The punishment for homosexuality was chemical castration, a series of hormone injections that left Turing impotent. It also caused gynecomastia, giving him breasts. But Turing refused to let the treatment sway him from his work, keeping up his lively spirit.

Hodges also added that Turing "dealt with it with as much humor and defiance as you could muster," continuing to do his work despite it being obvious to friends that the punishment was traumatizing.

Turing and the Apple Logo

In 2009, Creative Bits interviewed Rob Janoff, the creator of the Apple computer company's logo. Counter to what was written in the Facebook post, Janoff revealed that Turing had not, in fact, inspired its design, and that the rumor was nothing more than an urban legend.

According to Janoff, the truth about the idea behind the design of the Apple logo was much simpler. Taking a bite out of the piece of fruit was something just about everyone across the world could relate to, he said:

Creative Bits: Is it possible you were influenced subconsciously by these stories?

Janoff: Well, I’m probably the least religious person, so Adam and Eve didn’t have anything to do with it. The bite of knowledge sounds fabulous, but that’s not it. And there is a whole lot of other lore about it. Turing, the famous supposed father of computer science who committed suicide in the early 50s, was British, and was accused of being homosexual, which he was. He was facing a jail sentence so he committed suicide to avoid all that. So, I heard one of the legends being that the colored logo was an homage to him. People think I did the colored stripes because of the gay flag. And, that was something really thought for a long time. The other really cool part was that apparently he killed himself with a cyanide-laced apple. And, then I found out Alan Turing’s favorite childhood story was "Snow White" where she falls asleep forever after eating a poisoned apple to be woken up by the handsome prince.

Anyway, when I explain the real reason why I did the bite it’s kind of a let down. But I’ll tell you. I designed it with a bite for scale, so people get that it was an apple not a cherry. Also it was kind of iconic about taking a bite out of an apple. Something that everyone can experience. It goes across cultures. If anybody ever had an apple he has probably bitten into it and that’s what you get. It was after I designed it that my creative director told me: “Well you know, there is a computer term called byte”. And I was like: “You’re kidding!” So, it was like perfect, but it was coincidental that it was also a computer term. At the time I had to be told everything about basic computer terms.

The last claims made in the Facebook post were true, including that Turing was regarded as the father of computer science and decrypted Enigma machines around the time of World War II, saving millions of lives in the process.

In 2014, actor Benedict Cumberbatch starred in the film titled, "The Imitation Game." The movie was inspired by a 1983 biography of Turing that was authored by Hodges.

In sum, most of the claims in the Facebook post about the life and death of Turing were true. For this reason, we have rated this fact check as, "Mostly True."