Did Alabama Police Pose and Smile with 'Homeless Quilt'? 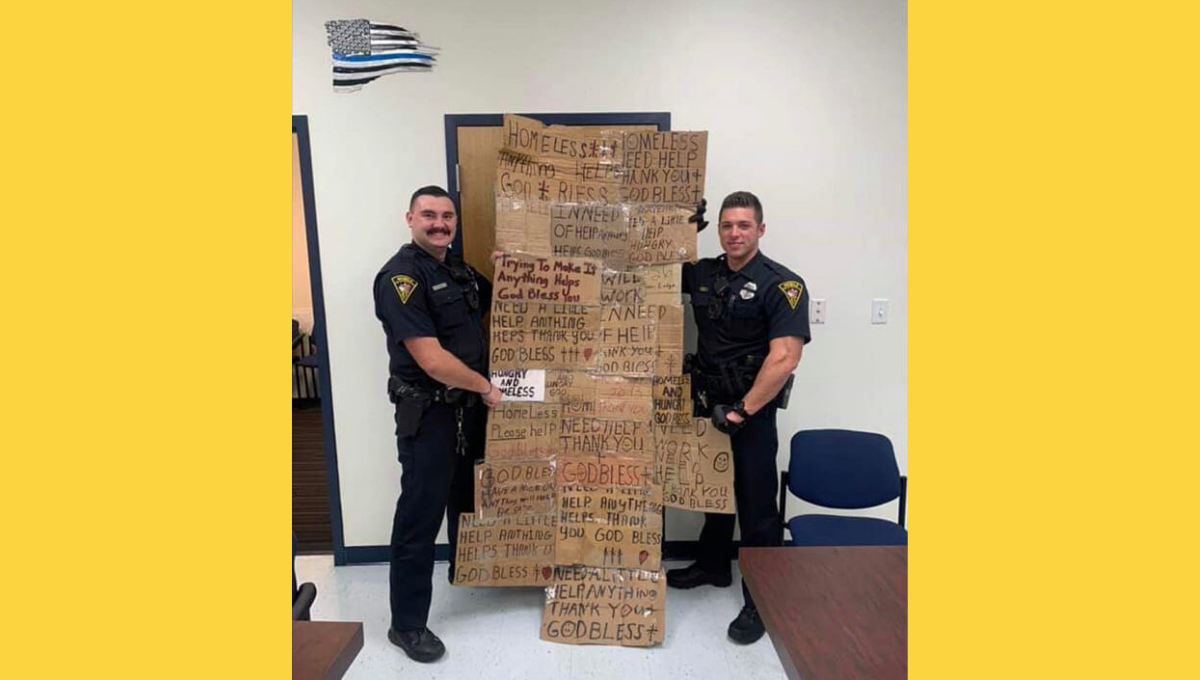 Claim:
Mobile, Alabama, police officers once posed and smiled while holding a "homeless quilt" made up of confiscated cardboard signs.
Rating:

In April 2021, a viral tweet resurfaced a distasteful episode in the recent history of policing in Mobile, Alabama: The "homeless quilt."

On April 29, Alec Karakatsanis, the executive director of Civil Rights Corps, a nonprofit that fights what it describes as "systemic injustice in the United States' legal system," published a widely shared post on Twitter.

The tweet featured what appeared to be a photograph of two police officers smiling as they held up a patchwork of cardboard signs of the kind sometimes displayed by homeless people, with messages such as "Homeless, need help," "Will work," and "Trying to make it, anything helps."

Alongside that picture, Karakatsanis wrote:

Whenever politicians talk about expensive "police reform" training, i think about how happy the cops are in this picture of a quilt the Mobile, Alabama police department made from the signs of poor people they arrested for begging. look at those smiles. The photograph was entirely authentic, and Karakatsanis' description of it was accurate. We are issuing a rating of "True."

The picture was taken in December 2019 and was originally posted to Facebook by Officer Preston McGraw, who is the February 2018 academy graduate shown standing on the left. On the right of the photo is Officer Alexandre Olivier, a January 2019 academy graduate.

Alongside the photograph, McGraw wrote:

Wanna wish everybody in [the] 4th precinct a Merry Christmas, especially our captain. Hope you enjoy our homeless quilt!
Sincerely, Panhandler patrol.

The photograph was subsequently deleted, and both McGraw and Olivier appear to have deactivated their Facebook accounts. But it garnered national news coverage at the time and caused widespread outrage.

Mobile Police Chief Lawrence Battiste later apologized for what he described as an "insensitive gesture" and added:

Although we do not condone panhandling and must enforce the city ordinances that limit panhandling, it is never our intent or desire as a police department to make light of those who find themselves in a homeless state.

In 2010, Mobile City Council passed an ordinance banning "panhandling" in parts of downtown Mobile and prohibiting "aggressive panhandling" throughout the city.

Did Any Consequences Come From the 'Homeless Quilt' Incident?

It's not clear whether McGraw or Olivier ever faced any formal investigation or disciplinary measures as a result of the incident. In a December 2019 interview, Battiste alluded to an "investigation" into the photograph but appeared to pre-judge its results by saying "the officers had a lapse in judgement."

Snopes asked a spokesperson for Mobile PD whether an investigation had actually taken place, who conducted it, what its parameters were, and what the findings and consequences were, if any. We also asked whether the department had discovered who was responsible for physically putting together the "quilt" from confiscated cardboard signs. We did not receive a response in time for publication.

It's not clear whether McGraw or Olivier were still employed by Mobile PD as of April 2021, but we know for sure they weren't fired in the immediate aftermath of the "homeless quilt" episode. Since then, both men have received commendations from the department.

In December 2020, Olivier was named Mobile PD's "Officer of the Month." In the citation, it was noted that he "takes a proactive approach in pursuing wanted suspects." The award citation also specified that, at that time, he worked patrol in the city's 4th precinct, which indicates that he was not reassigned after the "homeless quilt" incident.

In a Jan. 15, 2021, newsletter, Mobile Mayor Sandy Stimpson made a point of honoring Olivier and wrote:

He is one of the many officers dedicated to keeping Mobile’s streets safe, and I hope you’ll join me in congratulating him on his recognition as our Officer of the Month for December 2020.

As part of that commendation, Mobile City Council approved a $500 bonus for Olivier at its Jan. 19, 2021, meeting. The bonus was submitted by Chief Battiste and approved in a unanimous vote.

In May 2020, several months after the "homeless quilt" incident, Mobile PD's 2019 Annual Report listed McGraw as one of the recipients of the "lifesaving award," but did not contain any further information.

Snopes asked Mobile PD for details on any disciplinary measures taken against McGraw or Olivier, as well as their current status and duties within the department. Despite submitting multiple requests for comment, we did not receive a substantive response of any kind.