Was IS Leader al-Baghdadi Released from US Prison in Obama Era?

IS leader Abu Bakr al-Baghdadi was once held at a U.S. detention facility. 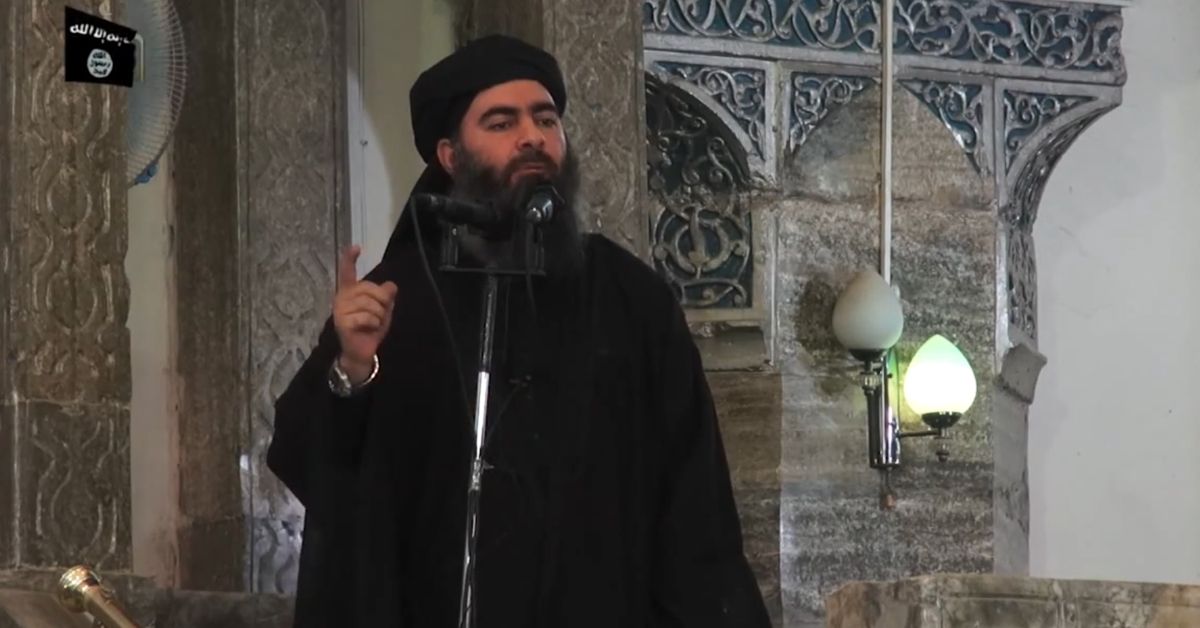 Abu Bakr al-Baghdadi was once held at a United States detention facility in Iraq.

According to the Pentagon, Baghdadi was released from Camp Bucca in 2004, during the administration of George W. Bush.

On Oct. 28, 2019, shortly after U.S. President Donald Trump announced the death of Abu Bakr al-Baghdadi, an old and persistent rumor holding that the Islamic State (IS) leader had been released from a United States detention facility in 2009 under the Obama administration started to recirculate on social media: This is not accurate. While al-Baghdadi was once held at a U.S. detention facility called Camp Bucca in Iraq, he was released in 2004, more than four years before Barack Obama took office.

The rumor that IS leader al-Baghdadi (who was born Ibrahim Awad Ibrahim Ali al-Badri al-Samarrai) was released during the Obama administration first started to gain prominence in 2014 as the U.S. negotiated an exchange for soldier Bowe Bergdahl. As conservative pundits accused Obama of having a so-called terrorist "catch-and-release" policy, some pointed to al-Baghdadi's alleged 2009 release as an example.

America left Iraq as a state not able to stand on its own.

And the head of this band of savages is a man named Abu al Baghdadi - the new Osama bin Laden - a man released by Obama in 2009 who started ISIS a year later. When Baghdadi left Camp Bucca, where the worst of the worst were held in Iraq, he threatened his American jailers, saying “I’ll see you in New York.”

And as the nation of Iraq teeters on the brink of total destruction, there is no question that the march will inevitably continue toward the West and the United States.

The claim that al-Baghdadi said "I'll see you in New York" as he left Camp Bucca, as well as the claim that he was released in 2009 during the Obama administration, can both be traced back to a 2014 Daily Beast interview with Army Col. Kenneth King.

King told The Daily Beast that he remembered al-Baghdadi at Camp Bucca in 2009 after seeing news reports about how he had become the leader of IS in 2014, and that he was a "little surprised" by al-Baghdadi's rise in the terrorist ranks:

King had not imagined that in less that five years he would be seeing news reports that al-Baghdadi was the leader of ISIS, the ultra-extremist army that was sweeping through Iraq toward Baghdad.

"I’m not surprised that it was someone who spent time in Bucca but I’m a little surprised it was him,” King says. “He was a bad dude, but he wasn’t the worst of the worst."

Although King told The Daily Beast he remembered al-Baghdadi being released from Camp Bucca in 2009, the Defense Department disputed this account. According to a statement from the Pentagon, al-Baghdadi was captured in February 2004 and then released a few months later in December.

A U.S. official also disputed King's account in a statement to ABC News. The official said that he wasn't sure exactly when al-Baghdadi had been released, but said that he had "resumed his activities" and had been "active with the group [ISIS]" since 2006, two years before Obama took office.

When pressed on this by ABC News, King said that he "could be mistaken" about the timing of al-Baghdadi's release. While King said that the man who left Camp Bucca in 2009 saying "I'll see you in New York" was a "dead ringer" for al-Baghdadi, the U.S. colonel conceded that he didn't connect al-Baghdadi to the 2009 encounter until he saw photographs of the IS leader in 2014:

King said that he first believed it was al-Baghdadi he had spoken with all those years past when he saw al-Baghdadi’s photo a week ago during coverage of the Iraq crisis. King said he took over as commander of the detention center in December 2008 and the man he believed to be al-Baghdadi was already there.

So the claim that al-Baghdadi was released in 2009 is largely based on a U.S. colonel's recollection of a five-year-old encounter after glimpsing a recent photograph of al-Baghdadi. The only other piece of "evidence" to support this claim comes from an alleged "Pentagon document" cited by The Telegraph about a terrorist named "Abu Duaa."

While al-Baghdadi may have used the name "Abu Duaa" at one point, this is likely a nom de guerre, a fake name an individual assumes during war, that multiple members of IS used. The Telegraph quotes Lieutenant-General Sir Graeme Lamb, a former British special forces commander who helped U.S. efforts against al-Qaeda in Iraq, saying that "we either arrested or killed a man of that name about half a dozen times":

“Abu Duaa was connected to the intimidation, torture and murder of local civilians in Qaim”, says a Pentagon document. “He would kidnap individuals or entire families, accuse them, pronounce sentence and then publicly execute them.”

Why such a ferocious individual was deemed fit for release in 2009 is not known. One possible explanation is that he was one of thousands of suspected insurgents granted amnesty as the US began its draw down in Iraq. Another, though, is that rather like Keyser Söze, the enigmatic crimelord in the film The Usual Suspects, he may actually be several different people.

“We either arrested or killed a man of that name about half a dozen times, he is like a wraith who keeps reappearing, and I am not sure where fact and fiction meet,” said Lieutenant-General Sir Graeme Lamb, a former British special forces commander who helped US efforts against al-Qaeda in Iraq. “There are those who want to promote the idea that this man is invincible, when it may actually be several people using the same nom de guerre.”

The evidence supporting the claim that al-Baghdadi was released from Camp Bucca in 2009 is flimsy at best. It is based on a single colonel's years-old recollection and a document mentioning a nom de guerre.

The official story is that al-Baghdadi was captured in February 2004, held at the Camp Bucca detention center, and then released a few months later in December.

Here's a statement from the Pentagon about IS leader al-Baghdadi's detention and release from Camp Bucca in 2004:

"Ibrahim Awad Ibrahim Al Badry, also known as ‘Abu Bakr al-Baghdadi’ was held as a ‘civilian internee’ by U.S. Forces-Iraq from early February 2004 until early December 2004, when he was released. He was held at Camp Bucca. A Combined Review and Release Board recommended ‘unconditional release’ of this detainee and he was released from U.S. custody shortly thereafter. We have no record of him being held at any other time."

In addition to the Pentagon's statement, Business Insider obtained al-Baghdadi's detainee records through a Freedom of Information Act request in 2015. The official documents show that al-Baghdadi was captured on Feb. 4, 2004, and that the date of his release was Dec. 8.