Do Airplane Toilets Dump Waste While in Flight?

And are we really talking about a constant rain of atmospheric feces? 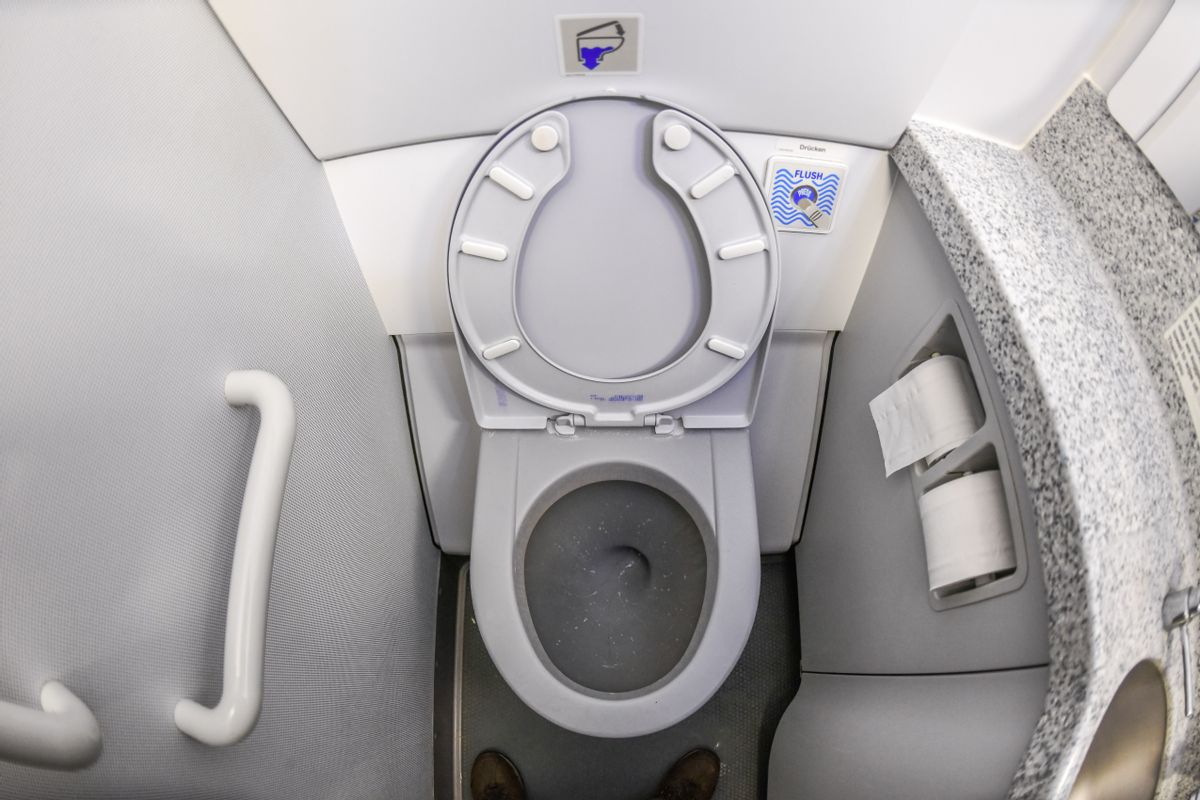 Claim:
Airplane toilets dump waste while the aircraft are in flight.
Rating:

In the 2001 adventure-comedy movie "Joe Dirt," the titular character proudly carts around a large rock-like object he falsely believes to be his "lucky meteorite." In explaining that the object is no meteorite but is, instead, a large ball of shit, an appraiser tells Dirt that airplanes "dump their toilets at 36,000 feet and the stuff freezes and falls to Earth."

This is not, strictly speaking, true.

It is true that frozen globules of poop can and have fallen from airplanes, but this is not by design. All commercial airliners currently use one of two basic toilet systems, and neither of them is designed to release waste during a flight. Both modern vacuum flush airplane toilets and older models that store waste in a blue deodorizing chemical dispose of it on the ground.

"There is no way to jettison the contents of the lavatories during a flight," Patrick Smith, a pilot and author of the book "Cockpit Confidential," told the Telegraph in 2022. "At the end of a flight, the blue fluid, along with your contributions to it, are vacuumed into a tank on the back of a truck. 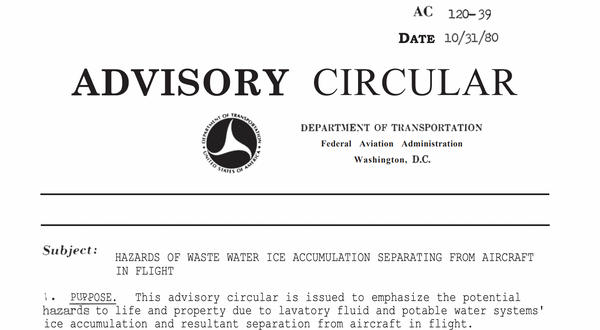 Prior to the invention of the vacuum toilet, which uses the pressure differential between the cabin in a plane and the atmosphere outside to create high-suction, low-liquid flushes — airplane bathrooms were similar in nature to Porta Potties. In 1982, Boeing introduced the first vacuum flush toilet, which greatly reduced the amount of stored liquid required for processing and transporting human waste.

Both forms of toilet are still in operation, and in both cases, the waste material is removed by an airport's ground staff. It is at this stage that things can potentially go wrong. A 1980 Federal Aviation Administration (FAA) memo to airlines highlighted the risk of falling clumps of waste material that could result from poor maintenance of lavatory systems:

Lavatory fluid and potable water systems' ice accumulation may drop off of the aircraft, posing a hazard to ground property, and may damage the aircraft wing, empennage or engine. Accordingly, this advisory circular is being issued to emphasize the need for proper maintenance of aircraft drainage systems. ...

Each operator should initiate and accomplish inspections of waste drain valves, caps, and heater systems to the extent necessary to ensure that these systems remain and function as designed, to prevent ice build-up, leaking water, and the resultant separation of the aircraft. 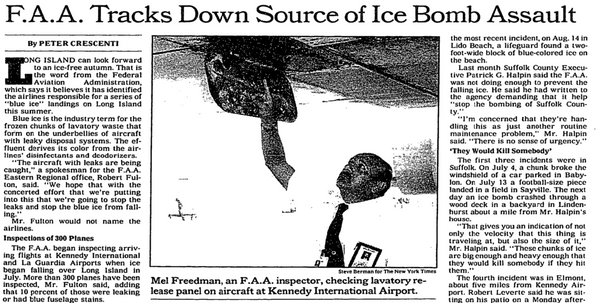 Waste leakage has been a documented problem for air travel for some time. In 1991, for example, the FAA launched an investigation aimed at figuring out which airlines were responsible for dumping "ice bombs" in their approach to Kennedy and La Guardia airports in New York. As reported by The New York Times:

Long Island can look forward to an ice-free autumn. That is the word from the Federal Aviation Administration, which says it believes it has identified the airlines responsible for a series of "blue ice" landings on Long Island this summer.

Blue ice is the industry term for the frozen chunks of lavatory waste that form on the underbellies of aircraft with leaky disposal systems. The effluent derives its color from the airlines' disinfectants and deodorizers.

"The aircraft with leaks are being caught," a spokesman for the F.A.A. Eastern Regional office, Robert Fulton, said. "We hope that with the concerted effort that we're putting into this that we're going to stop the leaks and stop the blue ice from falling."

Such events are rare — and getting more rare — thanks to the vacuum flush toilet, according to a 2018 interview with pilot and aviation lecturer Ron Bishop:

Mr Bishop … said [blue ice bomb] incidents have become less common since the mid 1980s when commercial airlines began using vacuum waste-disposal systems. "From 1979 to 2003 there were at least 27 wads of blue ice [big] enough to tear through roofs, smash cars, one even took out a church in England," he said.

Because such events stem from improper maintenance or faulty parts involved in aircraft lavatory systems and not from an intentional design to jettison waste into the atmosphere, the claim that human waste is released directly into the air during a flight is "False."

Smith, Oliver. "The Curious History of Toilets at 35,000 Feet – and What Happens When You Flush a Plane Loo." The Telegraph, 6 Nov. 2022. www.telegraph.co.uk, https://www.telegraph.co.uk/travel/travel-truths/history-plane-toilets-what-happens-when-flush-35000-ft/.