Did a Power Surge in a Plugged-In Air Fryer Cause a Fire, as Claimed in Viral Facebook Post?

Readers asked us to verify the contents of a Facebook post that described a purported fire hazard involving air fryers and power surges. 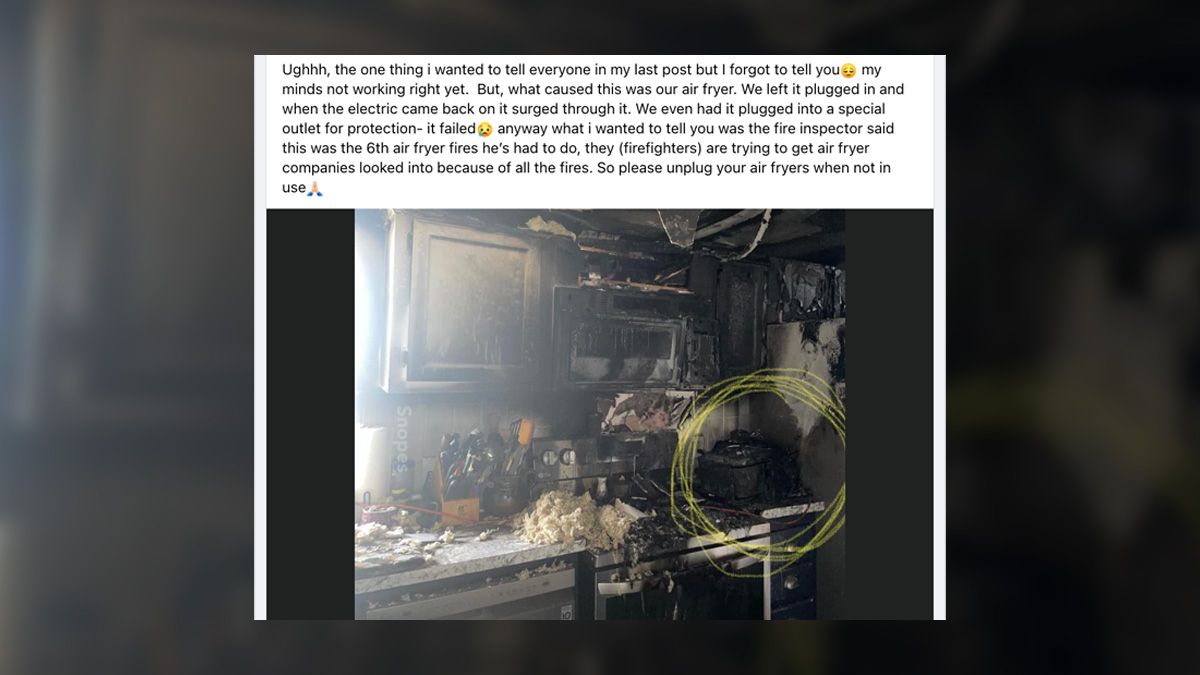 Claim:
A plugged-in air fryer underwent a power surge and caused a kitchen fire, despite the fact that it was plugged in to a special outlet for protection.
Rating:

On June 18, 2022, Facebook user Cindy Jennings posted that her kitchen had experienced what appeared in a picture to be a large fire. According to her post, the fire was caused by a plugged-in air fryer that had undergone a power surge when electricity was turned back on inside her home. "So please unplug your air fryers when not in use," the end of the post read. Readers asked us if this story was true, as it was being copied and pasted by other users. 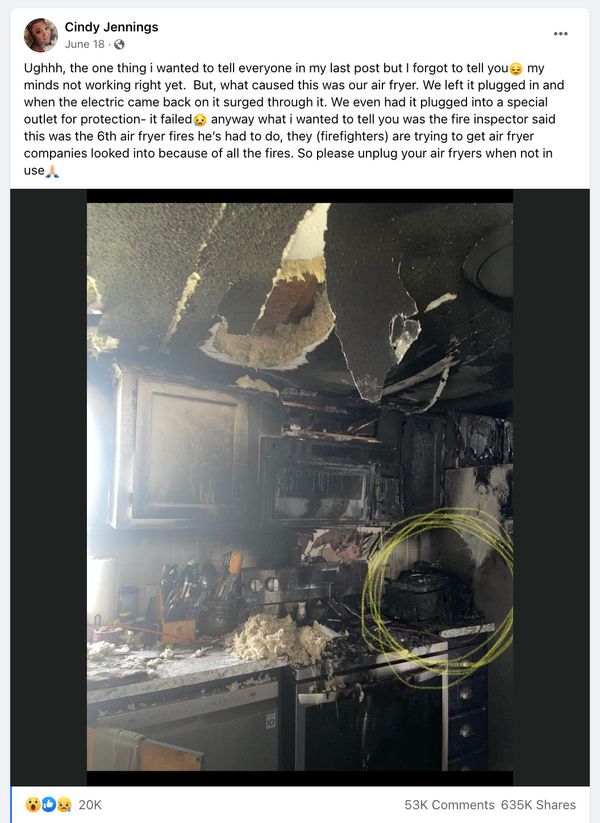 The post in question was being copied and pasted as follows:

Ughhh, the one thing i wanted to tell everyone in my last post but I forgot to tell you my minds not working right yet. But, what caused this was our air fryer. We left it plugged in and when the electric came back on it surged through it. We even had it plugged into a special outlet for protection- it failed anyway what i wanted to tell you was the fire inspector said this was the 6th air fryer fires he's had to do, they (firefighters) are trying to get air fryer companies looked into because of all the fires. So please unplug your air fryers when not in use

We looked to verify three key pieces of information for the readers who asked us to look into this story. We wanted to confirm that a power surge in an air fryer, which was said to have been plugged in with a surge protection product, was the cause of a fire inside Jennings' home. Second, we looked to verify with firefighters whom she said she spoke with that they had seen several air fryer fires just like this one, and that they were trying to get the problem looked at by investigators. We also wanted to find more details about any past recalls of air fryers.

According to publicly-viewable information on Jennings' Facebook profile, she appeared to live in Surfside Beach, South Carolina. We attempted to reach out by phone and email using contact information that we found online. We also sent her a message through Messenger. One of our questions would be to ask if the fire she described occurred in the town listed on her profile, or if it had happened elsewhere. We did not receive any responses.

In the case that the kitchen fire involving the air fryer and the power surge did happen in Surfside Beach, we contacted the Surfside Beach Fire Department. On the day after we first published this story, we spoke by phone with Keith Williams, the department's fire marshal.

"We can find no calls that we have ran that would have been in this nature," Williams told us. "We can't find a call in our county database or in our municipal database that would match up to this call Ms. Jennings would have had." By email, Williams also added that he would bring the supposed incident up at an upcoming fire marshal meeting for Horry County, in order to find out if any other members were aware of an air fryer fire under the name of Jennings.

After finding no luck with our Surfside Beach search, we noticed that Jennings' profile also mentioned that she was apparently originally "from Chesterville, Ohio." An online search for Jennings' name on the public-information website WhitePages.com showed a person with the same name supposedly residing in Marengo, Ohio. The listing showed an address at a mobile home park named Bennington Springs. Chesterville and Marengo are both located within the jurisdiction of the Big Walnut Joint Fire District.

On the Facebook page for the Big Walnut Joint Fire District, a post was made on the morning of June 15, just three days before the air fryer fire post from Jennings. The post said that a storm had caused a power loss in the area. It also mentioned that there had been a structure fire at the Bennington Springs mobile home park. This information seemed to line up with the details in Jennings' post.

Big Walnut Joint Fire District has been busy the last 24 hours, as a result of the storm and power loss we have responded to 18 calls for service including 2 structure fires. 1st fire was with Fredericktown Fire on Yankee Road, and 2nd in Bennington Springs mobile home park. Many of our members have gone almost 24 hours with no sleep. We want to thank the community for continuing to support the Big Walnut Fire District so we can be there for you in times like this.

We soon received confirmation from the fire department that Jennings' story was true. Here's what a spokesperson for the Big Walnut Joint Fire District had to say via email:

Our department, Big Walnut Joint Fire District, did have a fire on 6/14/2022 at Bennington Springs mobile home park. The picture you included is that scene. It was following a power outage that was county wide due to several tornadoes. The power had been returned to the area approximately three hours prior to the fire. The residents had left the occupancy prior to the power returning.

Our investigator, who is with multiple agencies, did rule the cause as the air fryer. This is the only fire our department has experienced with the origin being an air fryer. He stated there have been others - that is from his experience at other departments. This individual is no longer with our department. I do not know the final findings declared by their insurance investigator.

The air fryer had been left plugged in to a standard residential GFI outlet. The extension cord [visible in the picture] was for the refrigerator which was being powered by a generator.

With the mystery solved, we were also curious to find information on air fryer recalls that had occurred in 2022.

On April 21, 2022, Best Buy recalled around 772,000 Insignia air fryers and air fryer ovens, saying it was because they could "overheat, posing fire and burn hazards." Later, on Oct. 13, 2022, NewAir recalled 11,750 of its own Magic Chef air fryers too, also because of the same reason. It's unclear what make and model of air fryer appeared in the picture posted by Jennings.

Dec. 1, 2022: This story was updated after the fire marshal for the Surfside Beach Fire Department responded to our inquiry to let us know they found no record of an air fryer fire under the name of Jennings.

Dec. 1, 2022: This story was updated after we found a link between an address in Ohio and a Facebook post from the Big Walnut Joint Fire District.

Dec. 5, 2022: This story has been updated from "Research In Progress" to "True" after we established with the Big Walnut Joint Fire District that the story was true.