The Great Green Wall is an ambitious effort to tackle climate change. 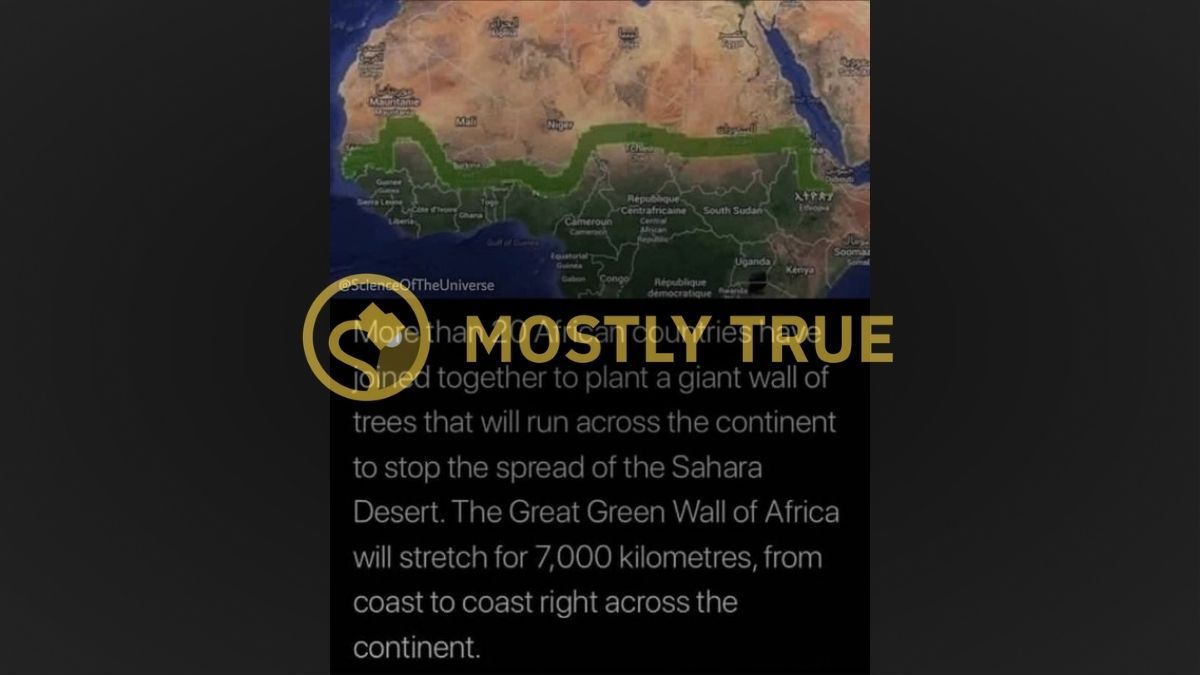 Claim:
More than 20 African countries banded together to combat the spread of the Sahara Desert by planting a giant wall of trees to run across the continent. This wall will stretch for around 7,000 km coast to coast.
Rating:

More than 20 African countries have partnered up in a project to tackle desertification through the spread of the Sahara Desert, which was conceived as a giant wall of trees meant to stretch from coast to coast of the continent. Though the Great Green Wall is still in the process of being created, the focus has shifted to smaller-scale planting programs that go beyond just trees. The official goal for the length of the “wall” is 8,000 km.

An ambitious effort by a group of African countries to tackle the effects of climate change and desertification has been in the works since 2007. The Great Green Wall (GGW) initiative plans to have trees extend like a belt across the Sahel region which is at the base of the Sahara, in order to prevent the expansion of the desert through climate change.

According to a meme shared with us by our readers, more than 20 African countries are a part of this effort, and the wall of trees, the meme says, will spread 7,000 km across the continent from coast to coast. This meme is largely true, though the length of the GGW varies, as the project itself is far from being completed. According to the United Nations Convention to Combat Desertification (UNCCD), the project “aims to restore Africa’s degraded landscapes and transform millions of lives in one of the world’s poorest regions, the Sahel. Once complete, the Wall will be the largest living structure on the planet – an 8,000 km natural wonder of the world stretching across the entire width of the continent.”

The project aims to have the "wall" extend from Senegal in the west to Djibouti in the east, by 2030. The official website for the GGW details the reason for all their efforts:

The catalyst for the Great Green Wall is the daily impact of desertification and climate change that is undermining the futures of millions of communities across Africa's Sahel region.

Since the 1970s, the Sahel has been heavily affected by recurrent periods of drought. These droughts have threatened the livelihoods and future of entire populations across the region.

The lack of rain has led to the disappearance of livestock and the destruction of cereal crops. The great famines that rocked the Sub-Saharan region in the 80s each affected millions of people. In addition, the high population growth rate is increasing demand for food and pressure to gain access to other natural resources which are the basis for livelihoods and the survival of the rural population.

Millions of people – particularly rural youth – are currently facing an uncertain future due to the lack of decent rural jobs and continuous loss of livelihoods due to land degradation and falling yields.

But according to The Associated Press, since the project’s inception in 2007, millions of the planted trees have died due to diminishing rains and rising temperatures. Only 4% of the project’s original goal has been met and around $43 billion dollars is needed to complete it. Given the challenges facing them, the focus of the project has also shifted from planting just a wall of trees to a “mosaic” of smaller and more durable projects that emphasize community-focused solutions that support agriculture and prevent desertification.

The GGW Accelerator, announced in January 2021, detailed these changes:

Progress has been achieved into the second decade of the initiative, with almost 18 million hectares of degraded lands restored and 350.000 jobs created across the Sahel and the Great Green Wall countries.

The Accelerator also highlighted additional challenges they encountered in the process of creating the GGW which included “insufficient coordination, exchange and flow of information at the regional and national level,” “weak organizational structures,” and “a lack of consideration in national environmental priorities.”

Some of the changes include planting orchards and circular gardens where large trees strategically protect smaller ones. A number of these have been thriving in Senegal’s portion of the GGW.

According to GGW’s official website, there have been a number of successes. Senegal planted around 12 million drought resistant trees in less than a decade, while 5 million hectares of degraded land was restored in Nigeria, and 15 million hectares in Ethiopia. A November 2021 report in the Nature Sustainability journal assessed the economic impact of the program and concluded that it was economically worthwhile:

The Great Green Wall programme is a colossal initiative to restore 100 million hectares of degraded ecosystems across 11 countries in the region [...]  We evaluated the economic costs and benefits of future land restoration projects under this programme. We applied different scenarios that account for both market-priced and non-market benefits from restored ecosystems and consider the heterogeneity of local decision-making contexts in terms of investment planning horizons, discount rates, and the time needed for the restored ecosystems to start yielding their benefits in full. The results show that every US dollar invested into land restoration yields on average US$1.2 under the base scenario, ranging from US$1.1 to US$4.4 across the scenarios. At most, ten years are needed for land restoration activities to break even from the social perspective, accounting for both market-priced and non-market ecosystem benefits. To fund all proposed land restoration activities, an investment of US$44 billion is needed under the base scenario (US$18–70 billion across scenarios).

The report added that  “Violent conflicts in the Sahel are estimated to reduce the accessibility to these degraded ecosystems from 27.9 million hectares to 14.1 million hectares.”

While originally only 11 countries were a part of the effort, today there are more than 20 African nations involved. You can learn more about the impact and current projects here, and in this video:

Given that the focus of the GGW has evolved beyond just planting trees, and it is still an effort in progress, we rate this claim as “Mostly True.”