Was the Appointment of Dr. Jerome Adams as Surgeon General Ignored by the Press?

This meme is not only false, but it seemingly undermines the very point it's trying to make. 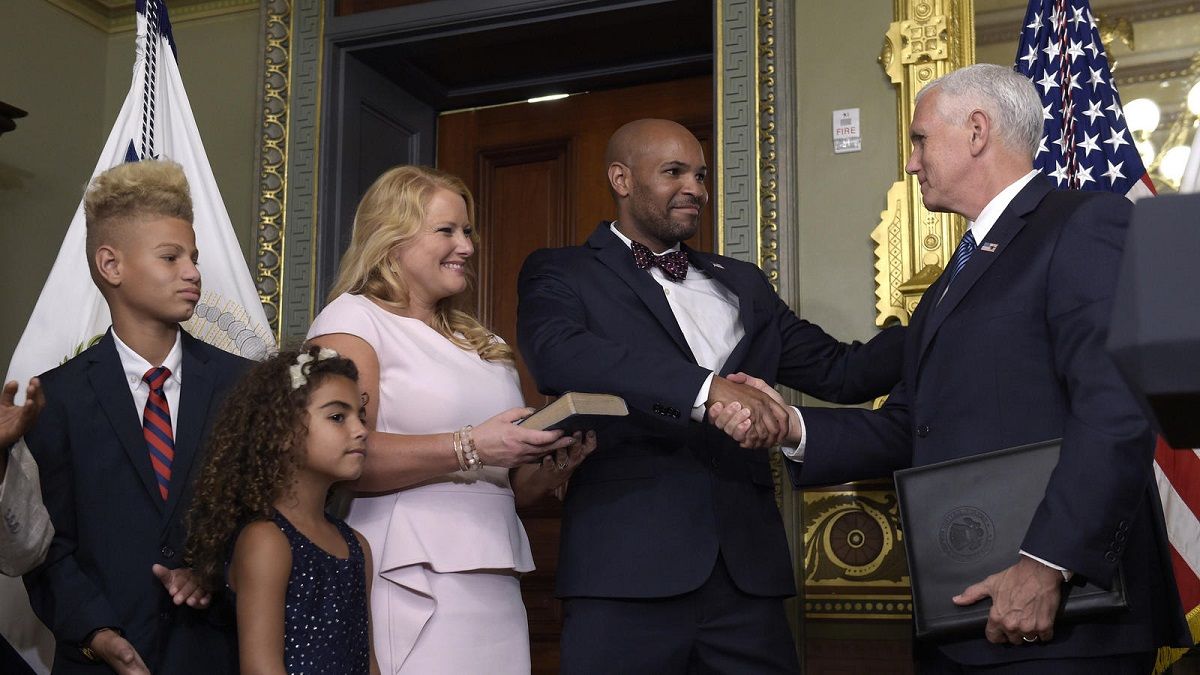 Claim:
The appointment of Dr. Jerome Adams as Surgeon General was ignored by the press because he's African-American.
Rating:

As of this writing (September 2018), a meme continues to circulate on social media holding that Americans "didn't see" news of the swearing-in of Dr. Jerome Adams as Surgeon General, because the "news media" purportedly didn't want the public knowing that a supposedly "racist" President Trump had "appointed a black man to a prominent position": Dr. Adams is an anesthesiologist who previously served as Health Commissioner of Indiana, having been appointed to that post by Indiana governor Mike Pence in 2014. He was later nominated for the position of Surgeon General of the United States by President Donald Trump and confirmed by the U.S. Senate four days later. It's true that hardly anyone has seen news coverage of Dr. Adams' swearing-in lately -- because it's old news, given that he took office well over a year ago, on 5 September 2017.

And, rather than being ignored at the time, Dr. Adams' appointment was contemporaneously covered by national news outlets such as CNN, USA Today, UPI, and the Associated Press, as well as metropolitan newspapers such as the Baltimore Sun and the Indianapolis Star.

Dr. Adams also received a good of national press coverage in May 2018 when he assisted with a medical emergency on a Delta Air Lines jet as he was preparing to fly to Jackson, Mississippi:

On my @Delta flight to Jackson, Mississippi (by way of Atlanta), and they asked if there was a Doctor on board to help with a medical emergency- why yes- yes there was. Patient doing well and like a good #USPHS officer, I was glad to be able to assist! pic.twitter.com/N9HdY3py6G

The putative point of this meme is somewhat undercut by the fact that Trump White House does not include a single African-American among its senior staff. In fact, outside of Dr. Adams, the only black person to hold a prominent position in the Trump administration is Dr. Ben Carson, the Housing and Urban Development Secretary:

Only a handful of his senior staff are of Latino, Asian or Arab descent, according to a CNN review of 48 senior White House officials. Instead, the President is being advised by a senior White House staff that is overwhelmingly white.

The lack of diversity also gained attention when Kellyanne Conway, a top adviser to the President, could not name a single African-American with an office in Trump's West Wing when pressed during an interview.

A lack of diversity in the Trump administration extends beyond the West Wing and into Trump's Cabinet, where Housing and Urban Development Secretary Ben Carson is the only African-American.

The overwhelmingly white, male makeup of Trump's Cabinet stands in stark contrast to efforts over recent administrations to make the President's Cabinet more representative of the US population.