Was Adam Rainer Born a Dwarf but Died a Giant?

The curious case of Adam Rainer is frequently attached to miscaptioned images. 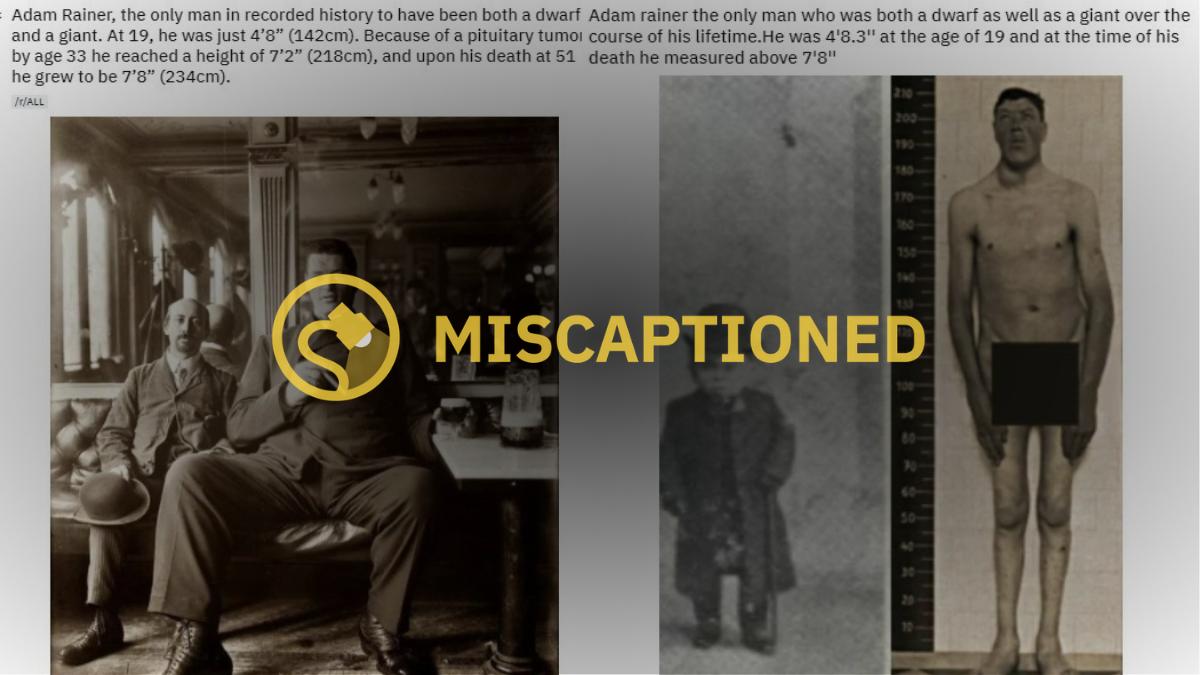 Claim:
Adam Rainer was classified as both a dwarf and giant during his lifetime.
Rating:

The story of Adam Rainer is true. While we found some discrepancies regarding exact measurements, the Austrian man was under 4 feet, 6 inches tall for about the first 20 years of his life, but would grow to more than 7 feet tall and died a giant. However, many of the photographs purporting to show Rainer are miscaptioned.

The strange story of Adam Rainer is one that often gets repeated online. In 1899, as the story goes, Rainer was born in southern Austria where he lived the first years of his life as a dwarf. Rainer was only 4 1/2 feet tall at the age of 19, but he soon experienced an unprecedented growth spurt. By age 30, Rainer stood at more than 7 feet tall, and was classified as a giant.

While the general gist of this story is true — Rainer was a real person who was classified as both a dwarf and a giant during his life — social media posts about this extraordinary human often include miscaptioned images.

These Photographs Do Not Show Rainer

There aren't too many authentic photographs of Rainer. While we found a few that were published in a medical journal in the 1950s (you can see those later in the article), many of the photographs supposedly showing Rainer actually show Baptiste Hugo, a Frenchman who, along with his brother Antoine, was known as one of the "Giants of the Alps." Baptiste, the taller of the brothers, appeared at circus "freak" shows in the early 1900s, but he was probably most famous for posing for a series of a postcards that showcased his gigantic size. Here's one photograph of the Hugo family. Baptiste and Antoine are the two in the ... well, you can probably figure it out. While contemporaneous rumors pegged his height at more than 12 feet tall, the Hugos were likely around 8 feet tall. An obituary for Baptiste published in 1916 stated that he was 8 feet, 4 inches tall, and that there wasn't a casket on Earth that could hold his body: 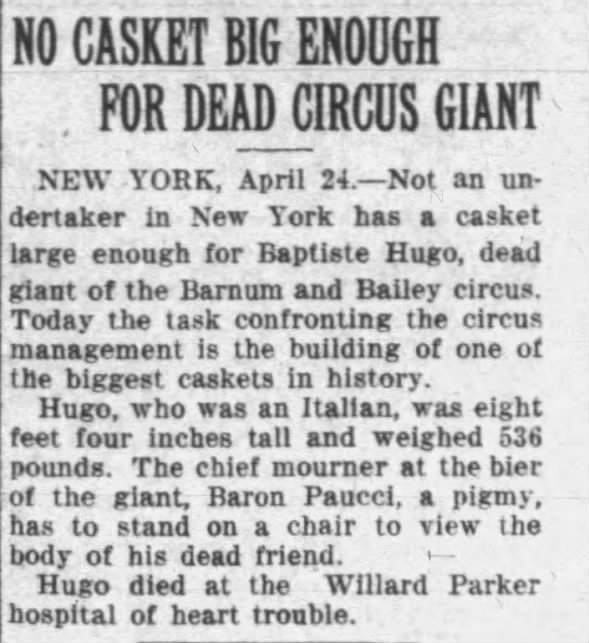 The man on the left, again, is Baptiste Hugo. The man on the right is likely "little Adriene," a dwarf who was often photographed with Hugo.

Another set of images supposedly showed Rainer during his unprecedented growth spurt. Again, these images do not show Rainer:

While this image set truly shows a case of acromegaly, the condition that spurred Rainer's gigantism, the person in these photographs is not Rainer. These pictures were originally published in the 1916 book "The Endocrine Organs: An Introduction to the Study of Internal Secretion," by Edward Albert Sharpey-Schafer. The name of this person was not provided in the book, but his age (42 in the final picture) does not match up with Rainer's (who was born in 1899 and would have been 17 when these images were first published). While we haven't been able to verify any photographs of Rainer when he was a dwarf, the following photographs are likely genuine. These images were included on a page dedicated to Rainer on the since-defunct website Tallestman.com, a website dedicated to documenting the history of giants.

While these photos are likely genuine (Tallestman.com has a good track record and correctly labeled the photographs of Baptiste), we have not been able to find the original source. If you know where these pictures were originally published, please contact us.

Was Rainer the Only Person in History To Be Both a Dwarf and a Giant?

Adam Rainer was both a dwarf and a giant during different periods of his life, but is he the only person in history to fall into both of these categories? As far as we can tell, yes. We haven't been able to find any records of any other person who was recorded as both a giant and a dwarf.

"This was a patient with gigantism who was, up to his eighteenth year, a dwarf ... His development from dwarfism to gigantism involves the whole problem of skeletal growth ... Up to his eighteenth year, the patient grew slowly. He was 138 cm tall at this time and was not accepted for military service because of his short stature ... At the age of 21, he started to grow rapidly, especially his hands and feet, and also his head. He needed wider hats and larger shoes. nose, lips and mandible became conspicuously large ... Measurement by the Anthropological Department with correction (at age 32), is 85 in. (7'1")."

Guinness World Records also notes that Rainer was a dwarf during the first 20 or so years of his life, before experiencing unprecedented growth and dying a giant. The sizes included in Guinness, however, are a little different than those quoted above. Guinness wrote in 1973:

Rainer's drastic growth is an extreme example of acromegaly, a "hormonal disorder that develops when your pituitary gland produces too much growth hormone during adulthood," according to the Mayo Clinic . While Rainer's growth was undoubtedly painful, Hirsch disputed the account that Rainer was "bedridden" during the later years of his life, writing:

After discharge from the hospital in Vienna, the patient lived in a small town in Austria. He was finally admitted to the Home of the Aged. his physician, Dr. H. Kammerlander, Rottenmann. Austria, reported that the patient was never confined to bed. He was able to care for himself. He was clumsy, but kind to his roommates ... On February 3, 1950, he was operated on for a perforation of the large intestine and peritonitis. he did not recover. An autopsy was not performed.

FITZHARRIS, DR LINDSEY. “The Insane Story Of A Man Who Was Born A Dwarf And Died A Giant.” Business Insider, https://www.businessinsider.com/adam-rainer-was-both-a-dwarf-and-a-giant-2015-1. Accessed 1 Feb. 2022.

“The Man Who Was a Dwarf and a Giant.” Damn Interesting, https://www.damninteresting.com/curio/the-man-who-was-a-dwarf-and-a-giant/. Accessed 1 Feb. 2022.