Did US Only Have 143 Absentee-Ballot Fraud Convictions Over 20 Years?

However you slice these numbers, documented examples of such fraud appear to be rare. 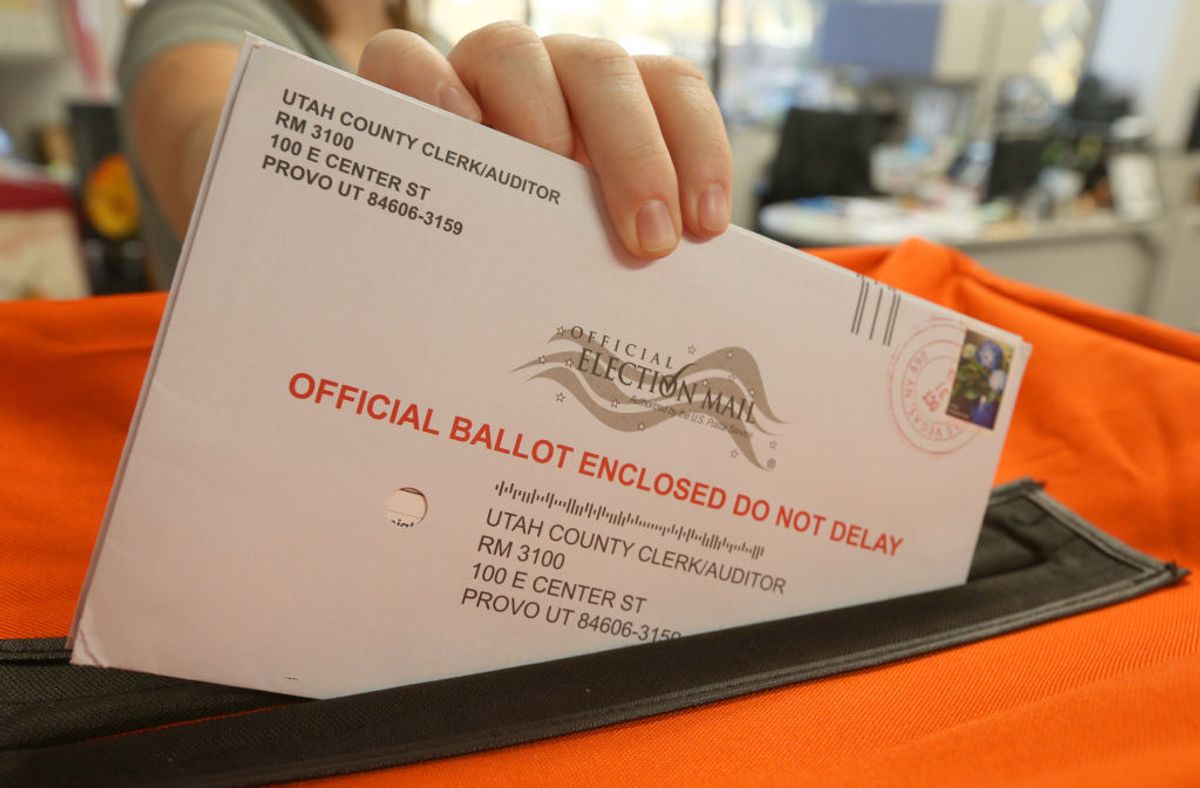 The Heritage Foundation has recorded approximately 140 criminal convictions related to the "fraudulent use of absentee ballots" over the last 20 years. These include instances of fraud in local and state elections, in addition to presidential contests.

Proven instances of such voter fraud account for an infinitesimal number of ballots when compared to overall votes cast, but the exact percentage is difficult to pin down.

In the months leading up to the 2020 U.S. presidential election, U.S. President Donald Trump repeatedly claimed that mail-in voting, a method of voting that became increasingly popular and necessary due to the COVID-19 coronavirus pandemic, would lead to widespread voter fraud. Trump made these claims despite the fact that the United States has been voting by mail since the Civil War in the 1860s; that Trump himself has cast mail-in ballots in several elections; and that relatively few criminal convictions related to absentee-ballot fraud are documented, especially when compared to the overall number of votes cast.

On July 30, 2020, actress Mia Farrow brought attention to the latter point in a tweet claiming the U.S. had only 143 cases of absentee-ballot fraud over the last 20 years:

This claim is largely accurate.

Farrow referred to a database of voter-fraud cases compiled by the the Heritage Foundation, an American conservative think tank based in Washington, D.C., that appears to have notable influence on the Trump administration's policies. This database catalogs various types of election fraud, such as altering vote counts, buying votes, and duplicate voting — adding up to a total of "1,290 proven instances of voter fraud" (in more than 30 years), according to the site's own summary. Farrow's tweet focused on just one category in the database: instances of "fraudulent use of absentee ballots."

This database does not have separate categories for "mail-in" votes and "absentee" votes. Some have argued that these are two distinct methods of voting, but no practical difference exists between these two terms. It should also be noted that while some have turned voter fraud into a partisan issue, the Heritage Foundation's database includes fraudulent attempts that would have benefited candidates from any party.

Farrow's claim that the U.S. had 143 criminal convictions for "fraudulent use of absentee ballots" over the last 20 years is generally accurate. However, when we perused the database, we only found 136 listings under this category during this time frame. The discrepancy is likely due to entries being added or deleted from this database since it was originally published. As of this writing, the Heritage Foundation lists 145 criminal convictions for absentee-ballot fraud dating back 32 years to 1988.

While the White House has used this database to show that that absentee-ballot fraud has truly occurred, others have used the statistics to argue that this problem is not at all widespread. Ellen Weintraub, the commissioner of the Federal Election Commission (FEC), highlighted this statistic in a 66-tweet thread about Trump's misleading claims on voter fraud: This database is not an exhaustive or comprehensive list. It does not capture all cases and certainly does not capture reported instances that are not investigated or prosecuted. It is intended to demonstrate the vulnerabilities in the election system and the many ways in which fraud is committed.

Although this database may not include every conviction for voter fraud, it does use a misleadingly large sample set in one way: The numbers are often used to argue about the prevalence of voter fraud in a presidential race, but the vast majority of examples in this category are not about presidential-election fraud but are related to local and state elections, such as races for school board officials and local city council positions.

We looked over the database for listings related to the two main presidential candidates over the last 20 years (George W. Bush v. Al Gore in 2000; George W. Bush v. John Kerry in 2004; Barack Obama v. John McCain in 2008; Barack Obama v. Mitt Romney in 2012; and Donald Trump versus Hillary Clinton in 2016), and we found only four listed criminal convictions related to absentee-ballot fraud. One instance involved a person voting for the Democratic candidate (Kerry in 2004), while the other three involved people voting for the Republican presidential candidate (Romney in 2012 and Trump twice in 2016).

Here are the Heritage Foundation's listings related to presidential elections (emphasis ours):

Kimberly Prude, a campaign volunteer for the Kerry_Edwards campaign, was convicted of illegally casting an absentee ballot in the 2004 election. She was already a convicted felon for forgery charges in 2000. Her probation was revoked and she is now serving her sentence in prison.

When her husband passed away, Verna Roehm decided to honor his last request--to vote for Mitt Romney in the 2012 election. Months after his death, Mrs. Roehm filled out and submitted an absentee ballot in her husband's name. The illegal vote was caught after the election during an audit by election officials; when confronted about the irregularity, Mrs. Roehm admitted to casting the vote. Recognizing the unusual circumstances of the case, the judge convicted Roehm of a misdemeanor rather than a felony. She received no jail time.

Terri Lynn Rote attempted to vote twice in the 2016 presidential election. Rote cited fears that the election was rigged to justify her attempt to cast two absentee votes for Donald Trump. Rote was arrested attempting to cast the second ballot. She pleaded guilty to a felony charge of election misconduct, and was sentenced to two years of probation and ordered to pay a $750 fine.

Audrey Cook, a Madison County election judge, sent in a ballot marked for Donald Trump in the 2016 election on behalf of her recently deceased husband. She pleaded guilty to a misdemeanor charge of attempted violation of the election code in exchange for dropping a felony perjury charge.

As illustrated in the examples above, these listings also vary in severity. All of the aforementioned listings involve a single extra ballot, but the database does include more serious examples, such as persons who attempted to pass off fraudulent signatures.

Given that this database is not exhaustive, includes examples involving single fraudulent ballots and multiple fraudulent ballots, and includes not just presidential elections but any local or state election, it's practically impossible to calculate the percentage of votes represented by fraudulent ballots. Anyway you count it, however, the .0006% cited by Farrow overstates the commonality of voter fraud.

First off, Farrow appears to have misplaced a decimal. Weintraub's tweet states .00006% (not .0006%), which appears to have been culled from an article published in The Hill:

One hundred forty-three cases of fraud using mailed ballots over the course of 20 years comes out to seven to eight cases per year, nationally. It also means that across the 50 states, there has been an average of three cases per state over the 20-year span. That is just one case per state every six or seven years. We are talking about an occurrence that translates to about 0.00006 percent of total votes cast.

But even that number may be too high.

If approximately 120 million people vote for president every year (as they did in 2016), that adds up to about 600 million votes for president in the last 20 years. The primary elections receive about half as many votes, so we can add another 300 million votes to this total. We don't have data for the number of votes cast in local city and state elections, so let's add another 100 million votes for argument's sake (the actual number is likely much higher if we accounted for every election in every city in every state over the last 20 years) for a total of 1 billion votes. This is a conservative estimate that does not include, for example, votes cast for a third party candidate. The total number of votes cast in local, state, and national elections over the last 20 years likely exceeds 1 billion.

With just roughly 140 convictions of absentee-ballot voter fraud during this time frame, then, that number represents approximately 0.000014% of total votes cast.

Lastly, it should be noted that the aforementioned statistics relate to criminal convictions. In other words, this database highlights the success of the safeguards that were put in place to stop fraudulent mail-in voter attempts.