Does Walt Disney World Have an Abandoned Airport?

The Mouselets, a group of Disney fans, documented the history of the Lake Buena Vista STOLport, which existed next to the Magic Kingdom parking lot. 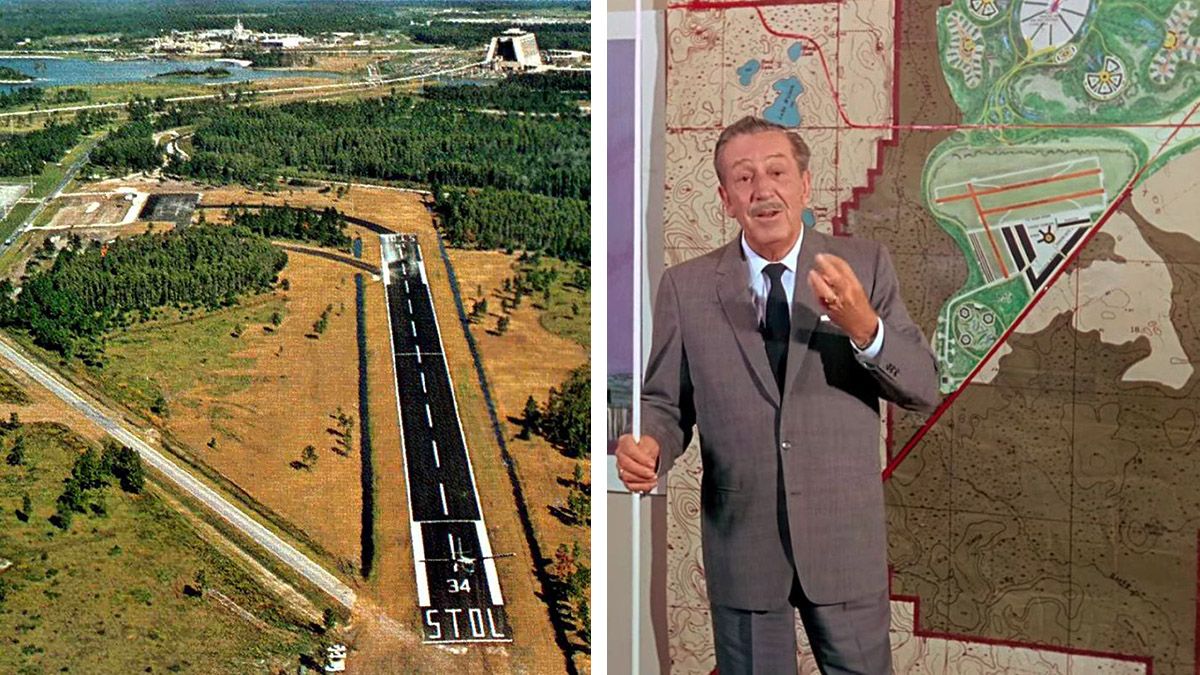 Claim:
The remains of an abandoned airport can be found on Walt Disney World property in Florida.
Rating:

In 1971, the Lake Buena Vista STOLport ("short takeoff and landing") opened, allowing for small aircraft to take off and land just across from the Magic Kingdom parking lot. It closed in the 1980s. However ...

The STOLport was little more than a short airstrip. Today, it's a private road that appeared to be used for storage.

It's true that Walt Disney World once had its own airport, or rather a STOLport. The name came from "short takeoff and landing," meaning it was meant for small aircraft. Before the airstrip was constructed, Disney contemplated much bigger plans.

An old blog from Jim Hill documented that Disney had originally considered building a regional airport on the same site where the EPCOT theme park sits today at Disney World.

On May 1, 1969, the Sentinel reported on the plans. At the time, Disney officials said the airport "will be a prototype for general aviation of the future":

"We haven't planned the airport anymore than we have planned EPCOT," said Adm. Joe Fowler, senior vice president for engineering and construction.

"We haven't set a timetable for it," he added, "but it's doubtful that we'll build it during Phase One."

An earlier report from 1967 said that the airport was originally intended to be located "north of State Road 530." However, that larger airport never came to fruition. The airstrip was a little more than a bare-bones runway for takeoff and landing.

The Orlando Evening Star reported that the airstrip was first inaugurated on Oct. 22, 1971. "Mickey Mouse and other Disney characters were on hand to greet the Shawnee and Executive airlines flights from Orlando's Herndon Airport and another STOLport in St. Petersburg."

According to the Orlando Sentinel, the landing strip was 2,000 feet in length. At one point, the cost for round-trip flights ranged from around $22-60 per person.

On April 10, 1977, the Sentinel provided details about a study regarding the potential for the STOLport:

It didn't work out that way, however. The STOL service never reached that potential. The 19-seat DeHaviland Twin Otter just wasn't big enough to make the venture profitable.

The reporting noted that Disney tested larger planes. A 50-seat aircraft could potentially have operated between Atlanta, Georgia, and Walt Disney World Resort.

Further, the Sentinel published that the three hotels Disney operated on its property were at "97 percent occupancy" in 1976. "If Disney decides to beef up its out-of-state attendance, it will have to find lodging for the guests," argued the newspaper.

The Walt Disney World Airport purportedly closed in the 1980s. Reports claimed it may have been due to the construction of the monorail, which can be seen later in this report in satellite photographs. We were unable to find the date that the last aircraft landed or took off from the STOLport.

In 2014, flight restrictions were issued by the Federal Aviation Administration for any aircraft coming within a specific radius of Walt Disney World Resort. The resort is now a no-fly zone.

Curiously, we found numerous reports of the airstrip once having a "singing runway." Stories told of grooves built into the pavement. The noises made when an airplane's wheels landed on the grooves purportedly sounded like the notes for "When You Wish Upon a Star."

But we were unable to find any reporting to support this rumor.

We did, however, locate perhaps a more plausible bit of information of how this rumor may have come about. On Jim Hill's old blog, he claimed that experiments were performed after the airstrip closed:

The Imagineers also supposedly used this long strip of tarmac to conduct a very interesting sort of experiment.

"What sort of experiment?," you ask. Well, the guys at WDI reportedly discovered that -- if you set up different raised areas of asphalt along a roadway at very specific intervals -- as you drove a wheeled vehicle in the right direction over this specially treated section of road, the vibrations that would then resonate inside the vehicle would almost sound like music.

As the story goes, the Imagineers allegedly used the 2000-foot-long airstrip at the old Lake Buena Vista STOLport to field test this musical-speed-bump idea. And -- to this day -- I've had WDW bus drivers swear to me that they actually took part in the field trials of this project. And that -- were you to begin rolling down that old runway at at least 20 MPH -- the vibrations that you heard inside your vehicle sounded just like the opening bars of "Zip-a-Dee-Doo-Dah."

However, we were unable to confirm whether it was Disney Imagineers or another group who performed the experiments. It was referred to as the "Singing Roadway."

Photographs Over the Years

One aerial picture probably shows the Lake Buena Vista STOLport best. In the background, Magic Kingdom and Cinderella Castle are both visible: This aerial view shows that the "airport" was basically just a landing strip. The area where planes once landed appeared to be used for storage.

Historical imagery from Google Earth showed that the former airport property changed after it was abandoned. Roads were somewhat altered and buildings were added: In April 2002 (left), the property had been empty and abandoned for a number of years. By January 2021 (right), things had changed. (Courtesy: Google Earth)

In sum, it's true that Walt Disney World Resort had an abandoned airstrip for short takeoffs and landings. However, it was a fairly bare-bones stretch of pavement and not a full-fledged airport. Details in reports of a "singing runway" or "musical roadway" were perhaps questionable.

Today, a road sits where the Lake Buena Vista STOLport airstrip once saw a number of aircraft bring guests to "the most magical place on Earth!"