Did a Firefighter Find a Bible Page Fused to a Steel Beam In World Trade Center Rubble After 9/11?

We tried to contact a photographer who was said to be involved in the discovery. 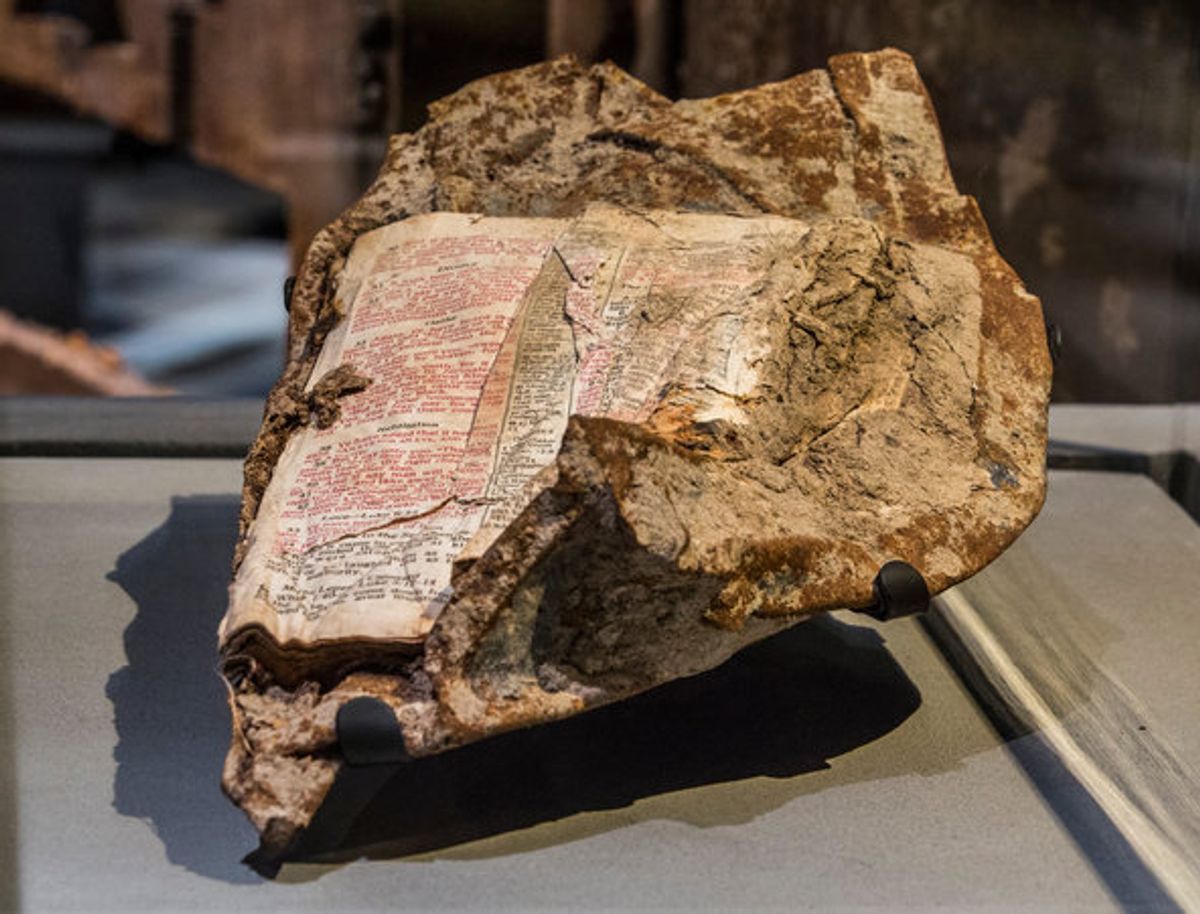 Claim:
A firefighter found a Bible page fused to a steel beam in the World Trade Center rubble after the 9/11 terrorist attacks.
Rating:

In October 2015, the Snopes newsroom came across the below-displayed tweet:

On Sept. 25, 2015, the New York Times published a short article titled “At 9/11 Memorial, an Enduring Message of Forgiveness” and described a previously little-known artifact of the 9/11 terrorist attacks that Pope Francis was slated to view during a visit to the United States: a Bible page fused to a steel beam from the World Trade Center that was supposedly uncovered by a firefighter and documented by a photographer in March 2002.

Words from Jesus’ Sermon on the Mount, in the Gospel of Matthew, were found permanently exposed at Ground Zero after the Sept. 11 attacks. The pages of the Bible in which they were printed had fused to a chunk of steel as the World Trade Center collapsed, to be found only months later.

The artifact is to be shown to Pope Francis when he visits the National September 11 Memorial Museum. It was given to the museum by the photographer Joel Meyerowitz, whose book “Aftermath: World Trade Center Archive” is the definitive pictorial chronicle of the months following the attack.

A firefighter found the fragment in March 2002, under the Tully Road, a temporary truck route that covered the last remnants of the south tower. He called out to the photographer, who happened to be nearby.

The firefighter was not identified by the Times, but the photographer who stepped forward with the Bible was identified as Joel Meyerowitz. Meyerowitz appeared in the History Channel web series "Remembering 9/11." Footage from that series was the first instance we’ve been able to find wherein Meyerowitz (or anyone) described the finding of this artifact, which was reported sometime between 2013 and 2014.

By 2013, there wasn’t much that hadn’t been examined, memorialized, relived, or written into history with respect to the events of Sept. 11, 2001. That event was seared into the American consciousness and continually referenced directly (and indirectly) in films, music, books, and the news, as well as on television and across the political landscape. The tiniest fragments remaining from that day have long since been swept into time capsules and museums with the oft-repeated promise to never forget. So the claim that such an artifact — the alleged Bible page fused to a steel beam — would remain unpublicized in the years of mourning is unusual but not impossible (especially given how quickly and widely other reports of responders finding Bibles and Bible pages in the World Trade Center's rubble spread via the news media).

Meyerowitz was not a late entrant to 9/11 memorialization efforts; indeed, his work as a photographer was linked to recovery efforts at Ground Zero long before "Remembering 9/11" aired more than a decade later. However, a Google search restricted to content published prior to the airing of "Remembering 9/11" (wherein Meyerowitz seemingly disclosed the existence of the fused Bible page for the very first time) yielded no hits for any occasions on which he mentioned the item. A brief and unverified CNN iReport dated Sept. 11, 2011, referenced a Bible page matching the description of the one Meyerowitz later discussed but included no mention of his name nor involvement.

Around the same time in 2011, Meyerowitz spoke at New York's 92nd Street YMCA about his work during 9/11:

Meyerowitz was profiled by the New Yorker in September 2011 to mark the ten-year anniversary of the attacks; that article also did not mention the Bible page that was supposedly discovered and given to him by a nameless firefighter back in 2002:

5. Is there one image or scene that evokes that day for you?

Because I was in the position of making images of the aftermath, I am loaded with image moments of my own, but when I think back to that day there was an image, maybe a video, of a cloud of dust squeezing its way through a side street, like the biggest tsunami of dirt ever made, and that image, for some reason, holds a special power for me.

In short, it’s neither impossible nor implausible that Meyerowitz did document a “heart-shaped Bible [page] fused to a steel beam” found in the World Trade Center's rubble after 9/11 and given to him by a firefighter. However, we haven’t yet found any mention of that story prior to 2013 or 2014, despite the fact that his body of work is strongly associated with the aftermath of 9/11. And as far as we know, the firefighter from whom Meyerowitz received the relic has never been identified, nor has he stepped forward to corroborate the discovery.

We’ve attempted to contact Meyerowitz in order to obtain more details about the 9/11 Bible page discovery; we will update this page if he responds.

This article was updated to meet Snopes current formatting and editing standards on Sept. 8, 2022.