Does Biden's Climate Plan Include Cutting 90% of Red Meat From Our Diets?

One way to smear a plan that is light on details is to make up your own objectionable details to tweet about. 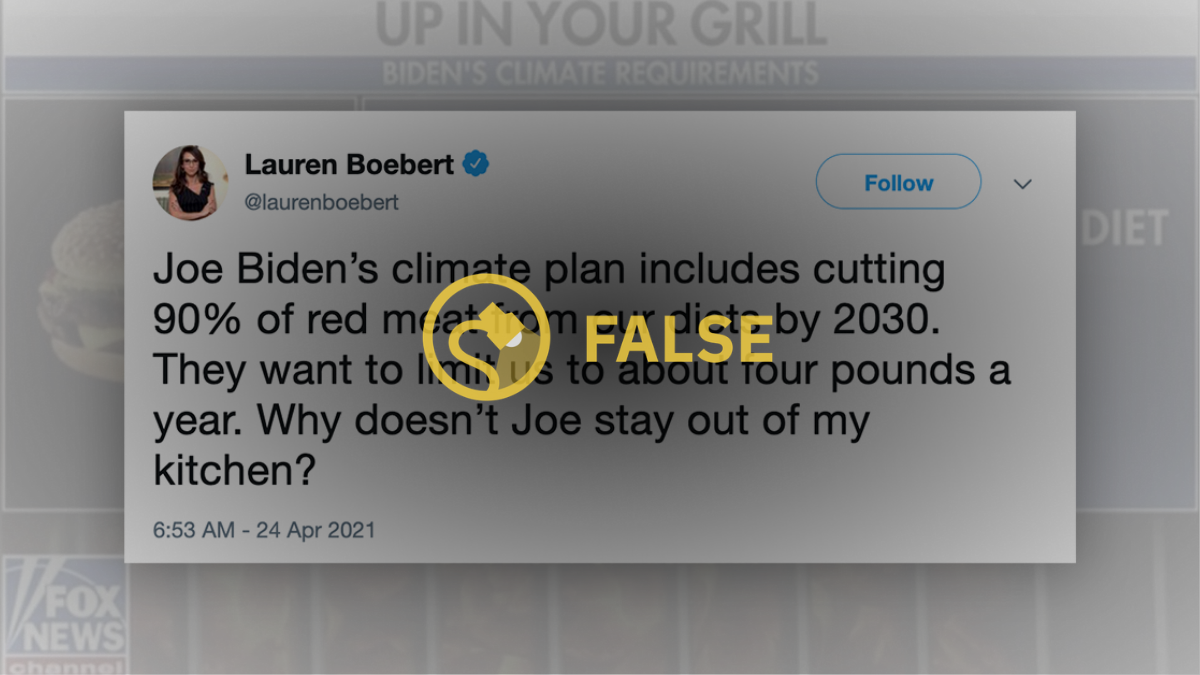 Biden announced that his administration would seek to reduce greenhouse gas emissions in half by 2030. The Daily Mail ran a story that asserted, in entirely theoretical terms, that the policy "could" require Americans to reduce their meat consumption by 90%. Politicians like Rep. Lauren Boebert retweeted the Daily Mail's speculation as fact.

On April 22, 2021, U.S. President Joe Biden gave remarks at the "Virtual Leaders Summit on Climate" in which he framed a nationwide effort to curb greenhouse gas emissions as an opportunity for "millions of good-paying, middle-class, union jobs." By investing in these new jobs, Biden said, he hopes the United States can cut its greenhouse gas emissions in half by 2030:

The United States isn’t waiting.  We are resolving to take action — not only the — our federal government, but our cities and our states all across our country; small businesses, large businesses, large corporations; American workers in every field.

I see an opportunity to create millions of good-paying, middle-class, union jobs.  I see line workers laying thousands of miles of transmission lines for a clean, modern, resilient grid.  I see workers capping hundreds of thousands of abandoned oil and gas wells that need to be cleaned up, and abandoned coal mines that need to be reclaimed, putting a stop to the methane leaks and protecting the health of our communities.

I see auto workers building the next generation of electric vehicles, and electricians installing nationwide for 500,000 charging stations along our highways. I see … engineers and the construction workers building new carbon capture and green hydrogen plants to forge cleaner steel and cement and produce clean power.  I see farmers deploying cutting-edge tools to make soil of our — of our Heartland the next frontier in carbon innovation.

By maintaining those investments and putting these people to work, the United States sets out on the road to cut greenhouse gases in half — in half by the end of this decade.  That’s where we’re headed as a nation, and that’s what we can do if we take action to build an economy that’s not only more prosperous, but healthier, fairer, and cleaner for the entire planet.

Despite these facts, right-wing news outlets and politicians began aggressively repeating the claim that Biden's plan included "cutting 90% of red meat from our diets by 2030." This false notion stems from the British tabloid the Daily Mail, which — in lieu of actual details the Biden administration has not yet provided — took it upon themselves to speculate about what terrible things "could" be theoretically included in the plan: The Daily Mail cited a report published by the University of Michigan Center for Sustainable Systems that looked, in extremely simplified terms, how much of a reduction would result from various dietary changes. As reported by the Center for Biological Diversity, the researchers concluded:

The University of Michigan exercise is, in their words, "reliant on a number of simplifying assumptions" and designed to show the impact of various diet change scenarios on climate. It is not, in any way, a policy suggestion or proposal. As you may recall, the Biden announcement was about green jobs and did not once mention initiatives to change the diet of Americans. Despite this, Biden's critics used the Daily Mail's baseless speculation as if it were actual scientific analysis of a plan whose details Biden has not yet released.

Former Fox News pundit Todd Starnes argued on his show that the January 2020 Michigan study was actually an analysis of a Biden plan that, at the time of this reporting in April 2021, has not been released:

The claim that Biden's plan includes this 90% red meat reduction is often paired with a Fox News screen capture: As it is clear by the citation, this information comes from the same University of Michigan study the Daily Mail relied on to speculate about potential paths to carbon emission reductions. It is not, as suggested, a "requirement" for Biden's climate plan. Fox's reporting made it all the way to the halls of Congress. On April 24, 2021, Rep. Lauren Boebert, R-Colo., asserted in a viral tweet that the Daily Mail's speculation was an actual policy proposal by Biden:

Because the Daily Mail is a British tabloid and not involved in American climate policy discussions, and because Biden's plan has not yet been released, claims that it includes a policy that requires a 90% reduction in red meat are "False."