Is This an 80-Million-Year-Old Shark?

This shark is at least 79 million years younger than suggested in this viral video. 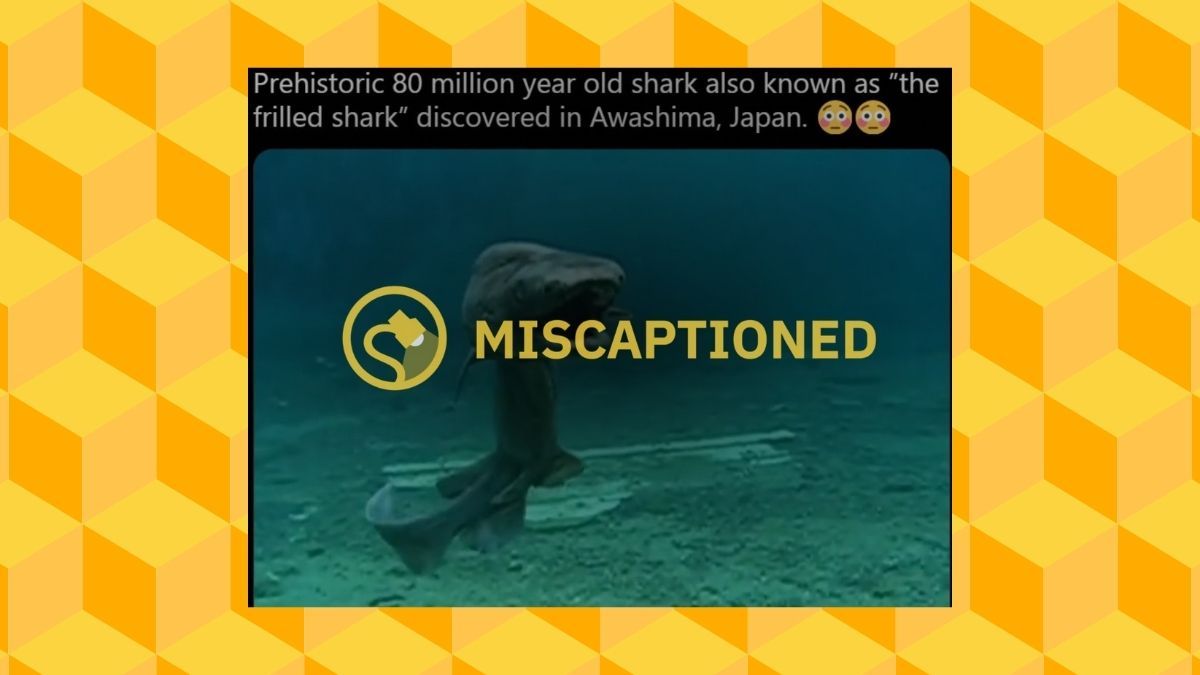 Claim:
A video shows an 80-million-year-old shark that was discovered in Japan.
Rating:

The shark pictured here is not 80 million years old. The frilled shark is sometimes referred to as a "living fossil" because its lineage can be traced back approximately 80 million years. However, these sharks only have an estimated lifespan of about 25 years.

In July 2021, a video was circulated on social media that supposedly showed an 80-million-year-old shark discovered off the coast of Japan:

This is a genuine video of a frilled shark or Chlamydoselachus anguineus. However, the wording of this caption left some people with the wrong impression of this shark's age.

This shark is not 80 million years old. Not even close. While the exact lifespan of a frilled shark is unknown (these sharks are difficult to study as they live some 2,000 feet below the ocean's surface), one estimate holds that this species lives for about 25 years.

So why the huge discrepancy? The 80 million figure refers to how long this species' ancestors, not this individual shark, have been swimming in Earth's deep waters. The frilled shark is often referred to as a "living fossil" because its lineage can be traced back more than 80 million years. National Geographic explained:

Frilled sharks are often called "living fossils," because in the 80 million years they've lived on Earth, the fish have changed little. The distant cousin of other sharks like great whites and hammerheads, frilled sharks have been swimming the Earth's depths since the time of dinosaurs.

The shark's 300 teeth may look intimidating, but they pose the biggest threat to the other fish and squid they're thought to feast on. Like modern-day sharks, frilled sharks have a hinged jaw that can catch large prey in the animal's needle-shaped teeth.

While today's frilled sharks resemble the fossils of their 80 million-year-old ancestors, the Smithsonian Institution's Ocean Initiative writes that they aren't entirely identical:

In the 65 million years since the Cretaceous-Paleogene extinction, sharks have continued to evolve and become the diverse group of cartilaginous fishes we see today.

Some modern sharks have direct ancestors from before the Cretaceous extinction event. Cow sharks date back to 190 million years ago, while the snake-like frilled sharks have fossils from 95 million years ago. That doesn't mean that these modern animals are identical to their ancient versions; on the contrary, they have certainly undergone evolution and changed over the millions of years of their existence. But paleontologists are fairly certain that our modern sharks are directly related to extinct relatives known to us by fossils.

The above-displayed video was taken in 2007 off the coast of Japan by a staff member of the Awashima Marine Park. This "living fossil" was about 5 feet long and died shortly after it was caught. Reuters reported at the time:

A species of shark rarely seen alive because its natural habitat is 600 meters (2,000 ft) or more under the sea was captured on film by staff at a Japanese marine park this week.

The Awashima Marine Park in Shizuoka, south of Tokyo, was alerted by a fisherman at a nearby port on Sunday that he had spotted an odd-looking eel-like creature with a mouthful of needle-sharp teeth.

Marine park staff caught the 1.6 meter (5 ft) long creature, which they identified as a female frilled shark, sometimes referred to as a “living fossil” because it is a primitive species that has changed little since prehistoric times.

Here's a video report about the 2007 sighting: