The miscaptioned video actually dates back to January 2021, just after the deadly protest at the U.S. Capitol. 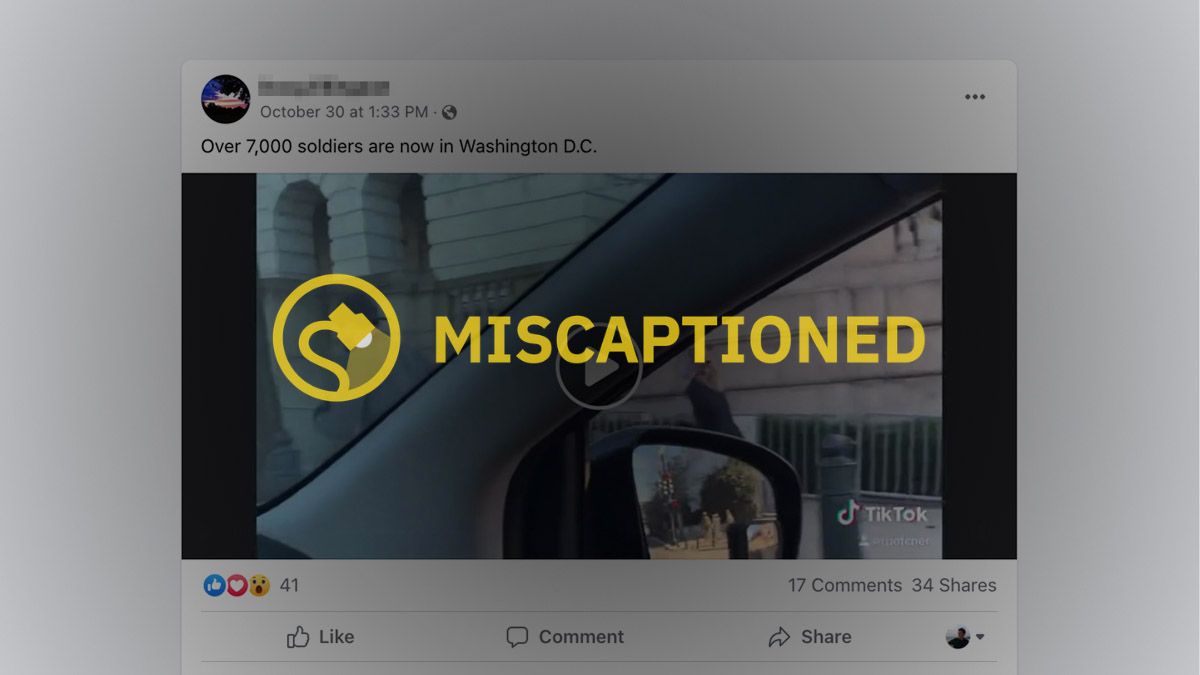 Claim:
A video shows 7,000 soldiers in Washington, D.C., just days away from the 2022 midterm elections.
Rating:

On Oct. 30, 2022, just days before the 2022 U.S. midterm elections, a Facebook user posted a video that showed soldiers and barricades in Washington, D.C. The misleading caption of the post read, "I just saw this on WCW Telegram page! MORE THAN 7,000 soldiers are now in D.C." The reality was that the video was recorded in early January 2021, just days after the Jan. 6 protest at the U.S. Capitol, and had nothing to do with preparations for the 2022 midterm elections.

Another user posted the same video, with one commenter responding that it showed the "calm before the storm." The full comment read, "Calm before the storm. The snakes are slithering. Let's see what happens. Make sure you have plenty of popcorn." Again, this was misleading, as the video was recorded nearly two years before the posts were made.

A spokesperson for the U.S. National Guard Bureau told us by phone that, the miscaptioned video aside, they knew of no plan or request for soldiers to be sent to the nation's capital ahead of the upcoming elections. Any such call-up would require a request for assistance and would then need to be approved by U.S. Secretary of Defense Lloyd Austin, the spokesperson said.

Reuters appeared to be the first to report on the misleading rumor. They published that a spokesperson for the D.C. National Guard said that they had "not received any requests for support and do not currently have any soldiers deployed ahead of the midterms." The Reuters story also noted that the rumor was being shared on various other platforms, including Twitter.

The video was originally posted on TikTok on Jan. 9, 2021. It appeared to have been recorded by a user named Richard Potcner.

According to Vox.com, at one point, up to 25,000 U.S. National Guard troops were expected to be headed to D.C. ahead of the inauguration of U.S. President Joe Biden on Jan. 20. The military personnel were brought in following the protest at the Capitol, during which a mob of former U.S. President Donald Trump's supporters stormed the Capitol building and grounds in an effort to stop the final tally of Electoral College votes that would determine the official outcome of the election. This process is described in the U.S. Constitution.

Note: Staff with the News Literacy Project also highlighted the truth behind this rumor in a tweet.

Cassidy, Christina A., and Anthony Izaguirre. "Election Claims, and Why It's Clear Biden Won." Snopes.Com via The Associated Press, 19 Jan. 2021, https://www.snopes.com/ap/2021/01/19/election-claims-and-why-its-clear-biden-won/.