700lbs snake pulled out of a lake in Proctor, NC.
Explains any missing persons reports in the area Origins:   This photograph of a large snake reportedly pulled from a lake in Proctor, North Carolina, by an excavation machine was widely spread via social media in June 2013. Like the subjects of many extraordinary Internet-circulated animal images, the snake in this photo appears to be a well-traveled one of varying size: this same picture has been posted with text stating that the serpent was found anywhere from North Carolina to Indonesia to the Panama Canal, and measured anywhere from about 46 to 98 feet (14 to 30 meters) in length.

This photograph appears to have first hit the Internet back in November 2012, when it was posted to the Kaskus Indonesian forum, which identified it as a 25-meter (82-foot) snake taken from a forest in the Indonesian province of Riau on the coast of Sumatra. About a week earlier, a photograph of a similar snake in a similar pose (but suspended from a different piece of construction equipment) had been posted to that same forum and identified as a 30-meter (98-foot) snake caught in Kalimantan (i.e., the island of Borneo): 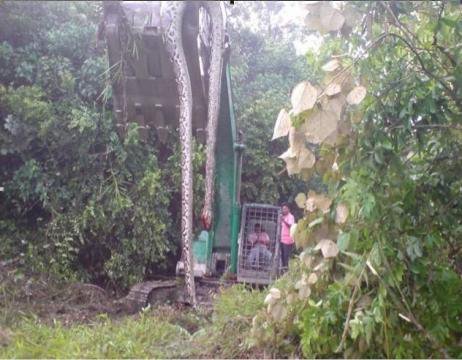 An Indonesian news article from later in November 2012 described the photo as one taken on 1 November 2012 which showed a python found in a tree trunk by construction workers in the Belinyu district of Indonesia’s Bangka Belitung Islands province, who dispatched the snake with heavy equipment and then buried it.

Estimating the length and weight of this snake from a single photograph is difficult, especially since the perspective of the image (in which the creature is much closer to the camera lens than the object holding it) exaggerates its apparent size. We note, however, that the Guinness World Records entry for “longest snake ever in captivity” documents a reticulated python that measured just a bit over 25 feet (7.7 meters) in length and weighed about 350 lbs. It’s likely the Indonesian reptile pictured here is in that ballpark, not a mutant that weighs twice as much and is anywhere from two to four times longer than the largest known snake.