A swastika-flag-carrying group was angry over efforts to take an accused Holocaust denier's name off an Arkansas Tech scholarship. 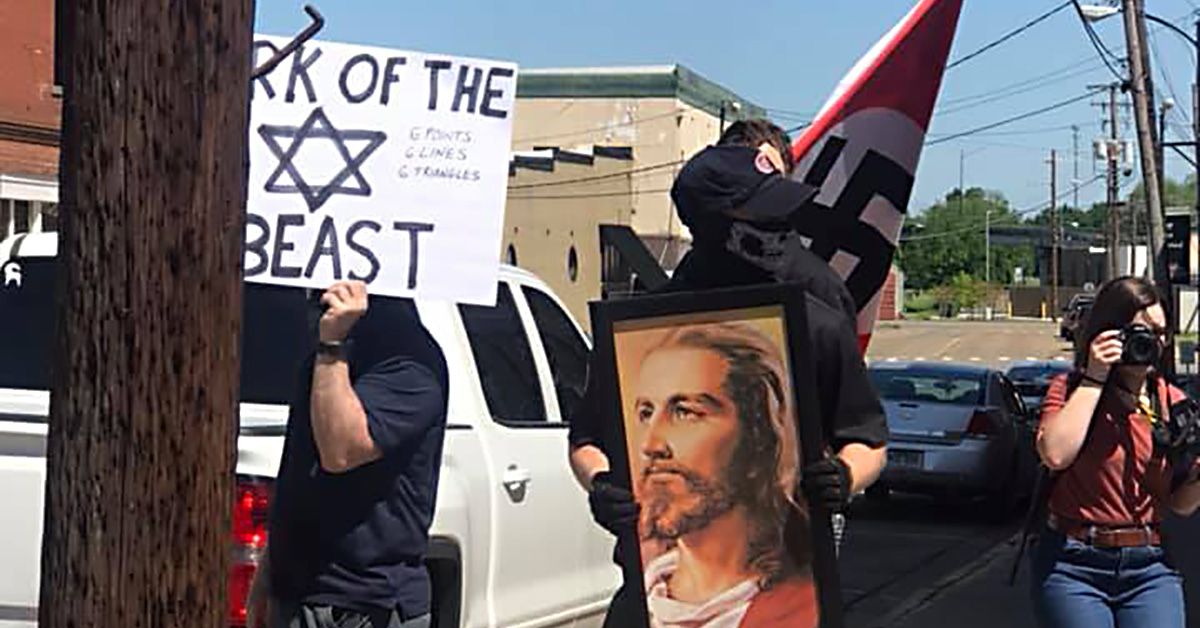 Weeks after Arkansas Tech University (ATU) came under public criticism from the Anti-Defamation League (ADL) for naming a scholarship after a deceased professor who was accused of teaching Holocaust denial to students, a group of white supremacists led by one of that professor's former students harassed a Holocaust remembrance event with racist, threatening chants and imagery.

About 10 to 12 swastika-flag-carrying white supremacists led by Billy Roper interrupted the 5 May 2019 March of Remembrance that took place in Russellville, Arkansas, heckling speakers that included a 96-year-old, wheelchair-bound World War II veteran. On a bullhorn, Roper could be heard leading chants such as "six million more," a reference to the number of Jews who died during the Holocaust.

Roper was upset at both the ADL and at event speaker and ATU Assistant Professor of English Sarah Stein for pressuring the university to remove the name of Michael Link, a deceased history professor, from a scholarship. In December 2018, the university had announced they had received about $190,000 from Link's estate to create the Michael Arthur Link and May Reid Kewen History Scholarship.

The ADL said that over his 50-year tenure at ATU, Link espoused anti-Semitic points of view and presented his students with literature promoting Holocaust denial as though it were accepted academic material. Aaron Ahlquist, regional director for the ADL covering Arkansas, Louisiana, and Mississippi, said in a statement that it was "deeply disturbing" but "not surprising" that Roper and his group targeted the Holocaust remembrance event in Russellville.

"If the leadership at Arkansas Tech needed more evidence — even though ample has already been provided — that a scholarship under the name of Professor Link is problematic and offensive, they need look no farther than Link’s former student Billy Roper and his band of white supremacists who felt the need to diminish and disrespect the six million Jews who died in the Holocaust in an effort to support Link," Ahlquist stated.

On 18 April 2019, the ADL sent ATU President Robin Bowen a strongly worded letter condemning the university for failing to take action on the scholarship and accusing the school of being "complicit in [Link's] hate." According to the letter, which was signed by dozens of academics, evidence presented to ATU for Link's views included "a well-documented 2005 incident in which Dr. Link presented anti-Semitic, neo-Nazi published texts in a graduate seminar as though they were legitimate historical works."

We placed a phone call to ATU spokesman Sam Strasner asking about criticism of the scholarship and Roper's activities in support of Link's name remaining on it. In response he sent us a statement from Bowen that said the university reviewed the complaints and that, "Through our process, we have not found evidence supporting the claims against the late Dr. Michael Link."

According to the ADL, Link was disciplined in 2005 for directing his students to the neo-Nazi published work entitled Debunking the Genocide Myth (among other problematic material), and they stated that ATU faculty confirmed Link had questioned the validity of the Holocaust during undergraduate lectures. "It is strange that ATU is willing to look past this most obvious example in its position that Professor Link was not a Holocaust denier," the ADL asserted in 9 April 2019 correspondence to ATU on the matter.

The ADL also pointed to a glowing remark left by Roper on Link's obituary page on ATU's website that refers to an "A" he received from Link on a paper that "no other faculty member would have accepted" due to the views it contained. (The comment has since been deleted by the university from their website.)

In video of the Remembrance event, Roper's group could be heard shouting at Stein as she spoke about her great-grandparents' fleeing to the United States from pogroms in Ukraine in the early 1900s that "left the head of the schoolteacher on the porch of my great-grandma" and members of her family later dying in the Holocaust.

During a solemn march that preceded the speakers at the remembrance event, Stein told us, Roper and his group "were right next to us on the sidewalk just screaming at us. If they knew any of our names they were calling them out, they were just screaming at us and taunting us and calling us slurs."

Stein told us they were targeting her and others who were present at the event who had also been active in efforts to remove Link's name from the scholarship. "We were there to do Holocaust remembrance, but they wanted to make it all about the issue of this scholarship."

She said university administrators have rebuffed a 1 May 2019 unanimous vote by the ATU faculty senate to remove Link's name from the scholarship. She added that the university as an institution "has not spoken out about the hate speech or the fact their faculty members are being called vile names by this hate group."

Stein was named in a slur-filled post on Roper's blog in which he boasted about the thus-far-failed attempt to pressure ATU into "removing a beloved history professor’s name from a scholarship he endowed." In yet another blog post, Roper included her picture.

We sent Strasner, the ATU spokesman, follow-up questions asking how the university could conclude Link was not a Holocaust denier if he had been disciplined in 2005 over that very issue; what the school is doing to keep its employees safe and support its students and staff in light of recent white supremacist activities; and what the school thinks about Roper's support for keeping Link's name on the scholarship as well as his using the fact it remains in place as a boasting point. We received no response by the time of publication.

"Allowing free speech does not preclude denouncing hate speech," said Marianne Tettlebaum, executive director of the Jewish Federation of Arkansas. "As a person in the Jewish community, I wish I would hear more form the university, saying something like, 'Yes, these people have a right to do what they do, but we don't agree with their views on Jewish people or minorities, or the way they're threatening a member of our faculty.'"

We left phone messages and emails requesting an interview with Roper. He has not agreed to do so as of the time of publication.