Probation for Child Rape Vs. Prison for Stealing Ribs? 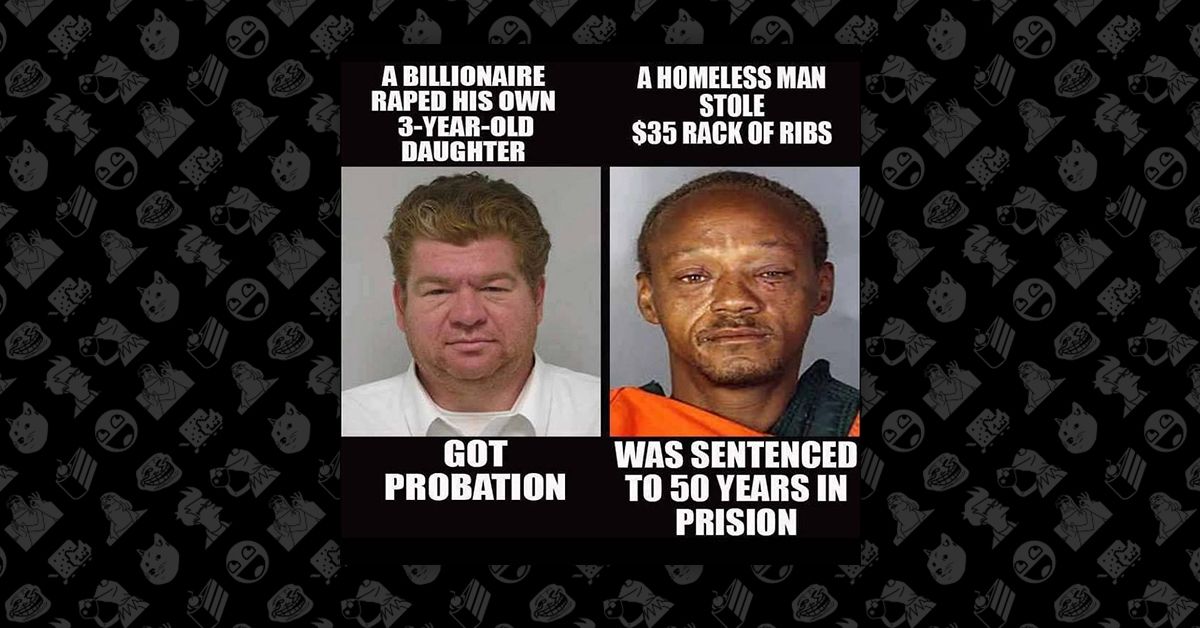 Claim:
A billionaire avoided jail despite raping his infant daughter, while another man was sentenced to 50 years in jail for stealing a rack of ribs.
Rating:

In 2009, Robert H Richards got a suspended eight-year sentence for raping his three-year-old daughter. In 2013, Willie Smith Ward was sentenced to 50 years in prison for stealing a rack of ribs from a grocery store in Waco, Texas.

Ward did not receive such a heavy sentence only on the basis of his conviction for robbery. Under Texas' "habitual offenders" law, the jury took into account nine previous convictions in handing down the 50-year sentence.

It's not clear whether Willie Smith Ward was, in fact, homeless at the time of the robbery in 2011, or his conviction in 2013.

Racial disparity in sentencing has long been a subject of controversy in the United States, and a meme posted to Facebook in November 2017 appeared to capture a particularly egregious example.

On 20 November 2017, the Army Anonymous page posted a graphic showing two mugshots of two different men — one white, one black — with the following text:

A billionaire raped his own 3-year-old daughter — got probation.
A homeless man stole $35 rack of ribs — was sentenced to 50 years in prison. While the two crimes in these examples are very different, statistics show that there exists a marked discrepancy in the sentences given to white and black people, even if they're convicted of the same or similar crimes. The Sentencing Project, a non-profit group that campaigns for fairness and equality in the criminal justice system, outlines how these racial disparities work:

The type of crimes that black people are more commonly convicted of are also crimes that are more likely to carry harsher sentences, the group explains.

And while the basic facts outlined in this meme are mostly accurate and follow a deeply unfortunate trend, it's worth giving some context for both cases.

The man shown on the left of the meme is Robert H. Richards, the wealthy great-grandson of Irenee du Pont, and an heir to the Du Pont chemical fortune.

In February 2009, Delaware Superior Court judge Jan Jurden gave Richards an eight-year sentence for raping his three-year-old daughter. Richards had initially been charged with second degree rape but later pleaded guilty to fourth degree rape, of which he was convicted.

Judge Jurden suspended the eight-year jail sentence, imposing probation on Richards and ordering him to perform 50 hours of community service, avoid all contact with children under the age of 16, and undergo sex offender treatment and mental health evaluations.

In her sentence order, Jurden noted that Richards had "significant treatment needs" and "would not fare well in [a] Level 5 setting" (i.e. jail.)

The News Journal in Delaware reported in 2014 that Richards' ex-wife had accused him of also sexually abusing their son, when the boy was 19 months old. Tracy Richards' lawsuit against her ex-husband was settled out of court.

The man shown on the right of the meme is Willie Smith Ward. In May 2013, a jury in Waco, Texas convicted him of robbery after he stole a rack of ribs from a grocery store, two years earlier. A clerk at the grocery store had told the court Ward threatened him and told him he had a knife in his possession.

We found no record of Ward having an address at the time of the robbery in 2011, or his conviction two years later, but we also did not find find evidence that he was homeless.

According to the Waco Tribune, Ward had five previous felony convictions including burglary, aggravated assault and  attempted robbery, and four previous misdemeanor convictions. Under Texas' "habitual offender" law, the jury took Ward's criminal history into account, and enhanced the sentence for his robbery conviction to 50 years.

According to prison records, Ward was denied parole in January 2017, and is still incarcerated at the William G. McConnell Unit state prison in Beeville, Texas. His next parole hearing is set for January 2019.

Ward is scheduled for release in September 2061, by which time he would be 91 years old.