Did a 5-Year-Old Girl Disappear from Her Home Every Night?

According to a story, the father called the police after he found out why the little girl was walking away from their home every night. 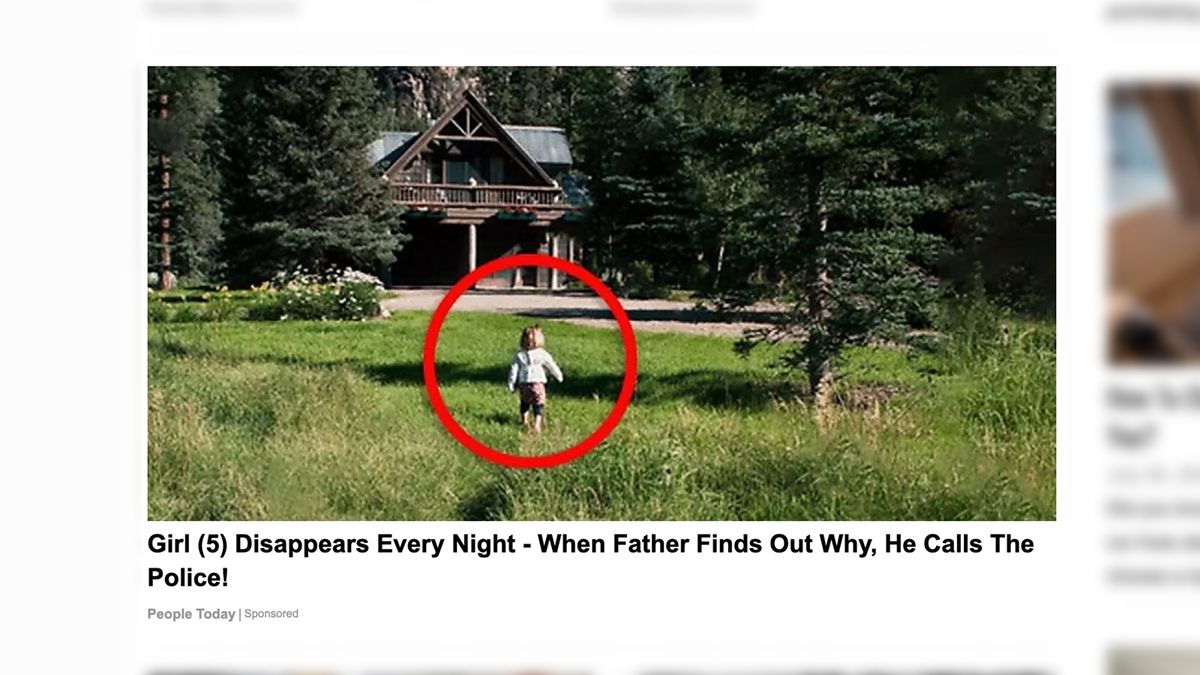 An ad claimed that a girl disappears every night and that when a father finds out why he calls the police. (Image Via Richouses)

Claim:
A 5-year-old girl walked away and disappeared every night into a house across the woods.
Rating:

Since at least 2020, and likely long before, stories about a disappearing child and a curious father have appeared in articles and YouTube videos. One of the tales about a 5-year-old girl read: "Girl (5) Disappears Every Night - When Father Finds Out Why, He Calls The Police!" A YouTube video carried a similar title: "Five-year-old girl disappears every evening. Her father followed her to this house."

In our research, we found that the stories about the little girl were pure fiction. However, they were perhaps twisted, originating from a real story about an 8-year-old boy.

We first stumbled upon the "girl disappears every night" tale in an online advertisement (see above) that showed a 5-year-old girl walking away to a house in the woods. In the ad, she was highlighted with a red circle.

According to the 54-page slideshow article, a single father named David was concerned about his little girl, Melissa, because she had been leaving their home for several nights in a row. In the end, he found out that Melissa was going to a nearby house to see her long-lost mother, Milly, who had unexpectedly left them two years earlier. She explained that the reason she ran away was that she wanted to escape her life, so she fled to Thailand. However, she decided to return home after regretting her decision.

The headline of the story and ad read: "Girl (5) Walks Away Every Night - When Father Finds Out Why, He Calls The Police!" It initially claimed that David eventually called the police on Milly. However, this didn't happen at the end of the story. The bit about calling the police was added by the advertiser to entice readers.

In June 2021, the Incredible Stories YouTube account posted a new video with stock footage and a narrator. It told a similar story about a girl disappearing every night.

The video was viewed nearly 3 million times in less than six months.

In this version of the tale, the father's name was Tom, and the 5-year-old girl's name was Annie. Instead of the little girl finding her long-lost mother in the house across the way, it turned out to be an old woman named Linda who had fled a nursing home, became homeless, and later found the vacant home. The video didn't claim that the story was real. However, we did note that this one was also fiction.

Our research into the "girl disappears every night" tale led us to an article on top5.com. Its headline read: "8-Year-Old Boy Disappears Every Night, Then Dad Secretly Follows Him And Realizes Why."

The source for this story was a 2014 article on metro.co.uk. It claimed that "a curious father was left stunned after discovering where his young son was going on his daily walks."

It's true that an 8-year-old boy named Ken Amante would go to feed hungry dogs on the streets of Davao City in the Philippines. We found a Reddit post and Imgur album about this same boy, which were both shared by his father.

However, we were unable to find confirmation from the father's posts and comments that he was "left stunned after discovering where his young son was going on his daily walks."

According to a second article from metro.co.uk which also was published in 2014, the boy eventually brought in £27,000 — equal to $36,268 USD in donations — to build an animal shelter. It's named the Happy Animals Club. As of November 2021, the boy was around seven years older. We found that the Happy Animals Club Facebook page and Instagram account were still active with new posts about animal rescues.

In sum, the real story about the boy helping animals in the Philippines appeared to be the basis for the fictional "girl disappears every night" tale.