Are 5 Million Bikers Heading to D.C. to Demand an End to the Russia Investigation?

A video of a group of motorcyclists has been repeatedly shared over the years with unfounded claims about what it depicts. 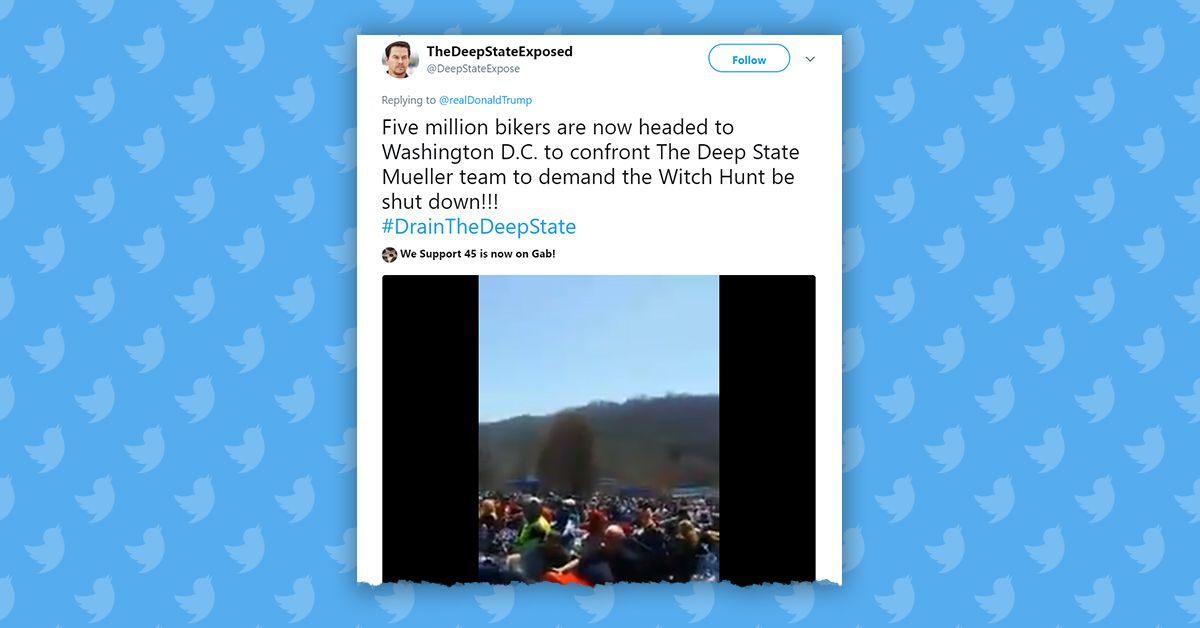 Claim:
A video shows 5 million bikers on their way to Washington D.C. to demand an end to the Russia investigation.
Rating:

On 29 July 2018, in response to a series of tweets from President Trump in which he railed against "The Robert Mueller Rigged Witch Hunt, "the Twitter account "TheDeepStateExposed" posted a video of a group of motorcyclists and asserted that it depicted "5 million bikers" who were on their way to Washington D.C. in order to "confront The Deep State Mueller team" and to "demand the Witch Hunt be shut down":

There is No Collusion! The Robert Mueller Rigged Witch Hunt, headed now by 17 (increased from 13, including an Obama White House lawyer) Angry Democrats, was started by a fraudulent Dossier, paid for by Crooked Hillary and the DNC. Therefore, the Witch Hunt is an illegal Scam!

Is Robert Mueller ever going to release his conflicts of interest with respect to President Trump, including the fact that we had a very nasty & contentious business relationship, I turned him down to head the FBI (one day before appointment as S.C.) & Comey is his close friend..

This video does not show 5 million bikers on their way to Washington D.C. to confront Robert Mueller.

First off, the stated number of bikers is almost absurd considering only about 8.4 million motorcycles were registered in all of the United States in 2017. For this claim to even be plausible, it would require that nearly 60% of all motorcycles owned in the U.S. be involved in the rally.

Second, this video is several years old. If it truly does show five million bikers on their way to arrive in Washington D.C. in mid-2018, then these motorcyclists are either attempting to set a record for the slowest-moving rally in history or they're supremely lost.

The earliest posting of this footage that we could uncover was posted on 9 November 2016 by the Twitter account @bikers4Trump. At the time, the video was shared with a threatening message aimed at a "Trump Protest" as well as a request for donations. A month later, the Twitter account @WeSupport45 shared the video again, this time claiming that these bikers were heading to Trump's January 2017 inauguration.

@WeSupport45 shared the video again in May 2018. This tweet appears to be the origin of the current viral claim, although in May 2018 the video was shared as if 15,000 (not 5 million) motorcyclists were on their their way to D.C. to confront Robert Mueller: While the claims associated with this footage have changed over the years, all of these sharings have been accompanied by a request for donations.

We have not been able to pinpoint the exact origins of this video, but it certainly doesn't show five million bikers on their way to Washington D.C. in August 2018 in order to confront Robert Mueller and demand an end to the Russian interference investigation. This footage is several years old and has repeatedly been shared with unfounded and controversy-driven claims in an attempt to get viewers to part ways with their money.