Dated photos showed a massive pit filled with a maze of what looks like tightly packed yellow school buses. 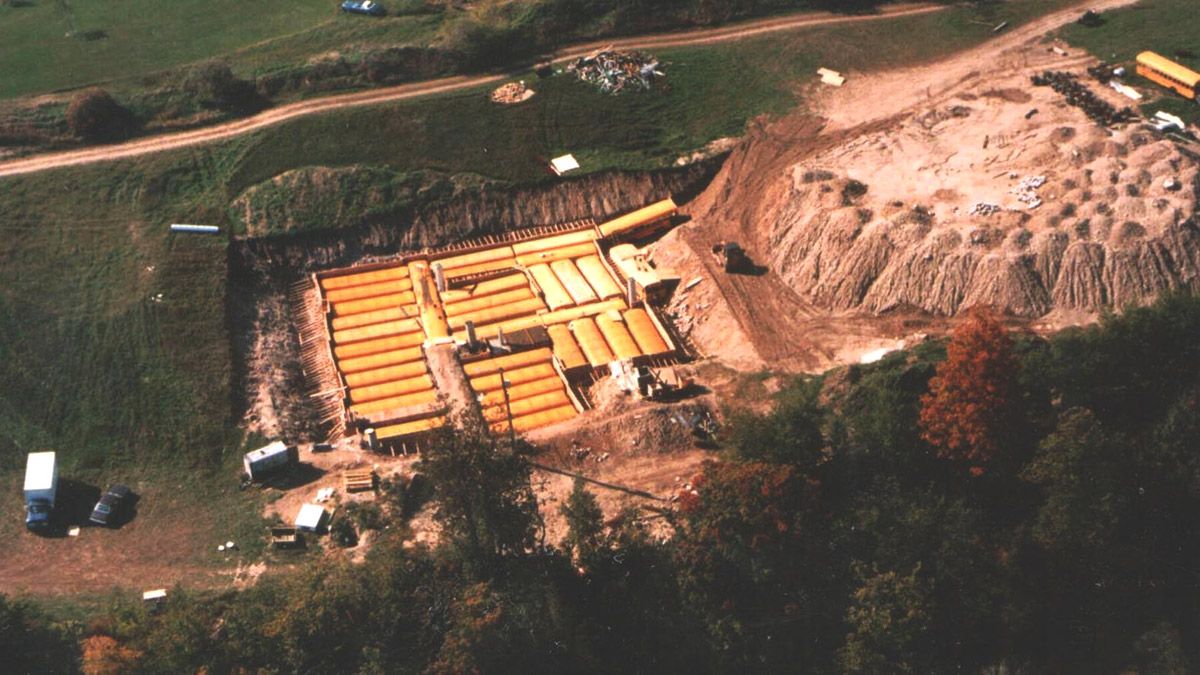 The photograph was striking. Forty-two school buses appeared to be buried underground after being packed tightly in a massive pit. Since at least 2020, online advertisers have paid money to display ads just like these. One read: "Man Buries 42 School Buses Underground. Look When He Reveals The Inside." A variation said: "83-Year-Old Man Who Buried 42 School Buses Underground Lets Cameras Inside." This aerial photograph did not appear to have been altered. Construction for the "Ark Two Shelter" began in 1980.

What sets these ads apart from others that we've debunked in the past was that this time it was all real. They were both displayed in 2021. Regarding the second ad, the age of the man was about three or four years off. But the story was not new.

In 1980, Bruce Beach installed the first of 42 school buses to be buried for a nuclear fallout shelter called the "Ark Two Shelter" located in Horning's Mills, Ontario.

Cameras had been allowed inside several years before the above-displayed ad claimed, if not since construction began. Freeze-frames from what looked to be old videotape footage showed that at least one videographer had access from the beginning. "Ark Two Shelter" also appeared on a 2012 episode of National Geographic's "Doomsday Preppers."

In 2019, an urban explorer from the Freaktography website visited the shelter. The photographer, who was not named, received permission from Beach to come on the property. He also interviewed him to learn more about the effort.

"My motive in building the shelter was that it would be a resource for reconstructing society," Beach said. He also told Freaktography that the deepest point has 2 feet of concrete above it, plus "14 feet of earth."

As for why buses were chosen, Beach said, "they were just inexpensive at the time." He said that he purchased each bus for about $300. "[The buses] made the form to pour the concrete. If [the buses] left today, it wouldn't make any difference. The shelter is here. It's built out of concrete, and reinforced concrete. But they were just a form that we left in place."

As of 2019, the shelter had LED lighting inside the buses and rooms. It was stocked with food such as big buckets of beans. The shelter had freshwater access, beds, tables, chairs, and children's products such as high chairs for feeding. A seemingly endless storage of supplies and materials also included radiation detectors. There was even what appeared to be a makeshift dentist's office:

Beach told Freaktography that the shelter was not intended to be a long-term solution, but rather a "resource" for a short period of time. In particular, he mentioned that it could be used for women and children. It also had a number of rooms in addition to the 42 buried school buses.

Freaktography's visit to the 42 buried school buses was chronicled on its blog. A lengthy video tour was also published to YouTube:

Beach has a YouTube channel where he was still uploading videos as of early 2021. On Jan. 23, he published: "TIME OF THE ANTICHRIST IS UPON US!"

The advertisement about the 42 buried school buses may have reminded some readers of other fact checks. For example, we once reported about another ad that promised a "sickening discovery" after Niagara Falls was drained. There was also the story of the "deepest hole on earth."