An old photograph purportedly showing a man holding a 42-lb. bullfrog is actually of recent vintage and highly exaggerated. 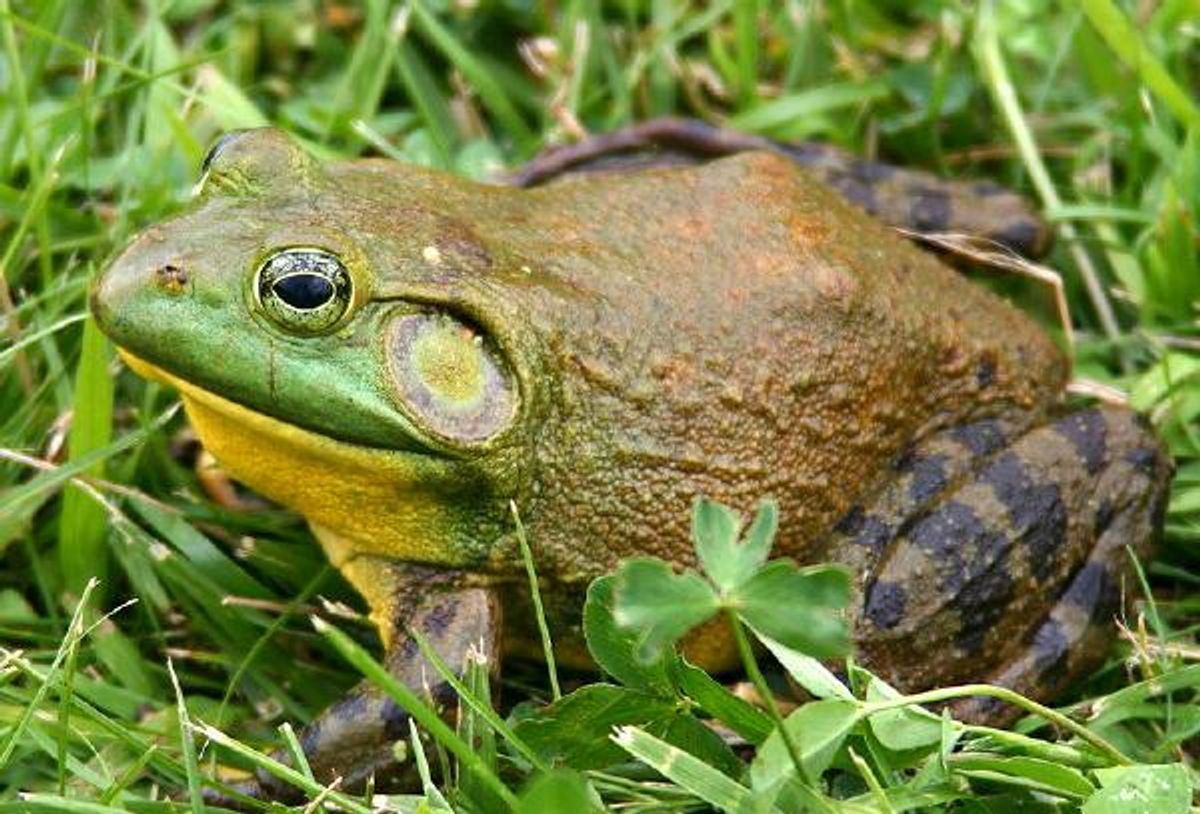 I have heard of a Frog that a man caught in N/W Arkansas that weighed 42 lbs.? [green-label]Origins:[/green-label] In November 2015 a vintage image purportedly showing a man holding a 42-lb bullfrog caught in Arkansas began circulating online. While the image bears the characteristics of a very old photograph (e.g., it's a grainy, black-and-white picture), it is actually of relatively recent origin, most likely taken in 2012 (shortly before it was posted to the Salty Cajun forum): While the messages on the Salty Cajun forum didn't provide much concrete factual information regarding the frog's size (the original post was made by a friend of the pictured frog-catcher, who was passing on second-hand information), it did provide a hint about why the frog looks so large in the picture:

This is a pic taken of one of my best friends ever. He and one of his employees gigged this thing out of another friend's pond!

Evidence that the frog was gigged, or caught with a multi-pronged spear, can be seen in the shadow at the left-hand side of the photograph. Also, the man's hands are hidden by the frog, as he is most likely holding the frog out in front of him with a spear: Objects in the foreground of photographs typically look deceptively larger in comparison to objects positioned farther from the camera, so the frog seen here appears unnaturally big due to the forced perspective of the shot. So how big is it? While we haven't been able to determine the exact dimensions of the pictured amphibian, we can say that it is definitely not a 42-lb. bullfrog.

The largest frog on earth, the Goliath Frog, weighs about 7 pounds. It is highly unlikely that a frog weighing six times as much as the world's largest frog went practically unnoticed when it was captured in 2012. Furthermore, the Goliath Frog lives in Africa, not the United States (where the above-displayed picture was taken). The largest frog in North America is the American Bullfrog, which typically weighs only about 1.5 pounds.

Lastly, it should be noted that this picture has also been passed around with the accompanying claim that it depicts an 11-lb. bullfrog. While this claim is also false (the frog seen here likely weighed between 1 and 2 pounds), at least it isn't as outrageous as claims about a 42-lb. bullfrog.