Was a '400-Foot Ice Ship' Discovered in Antarctica on Google Maps?

Conspiracy theorists claimed the "ice ship" seen on Google Maps was linked to Nazis or was being built underground for the rich and powerful in the case of a massive disaster. 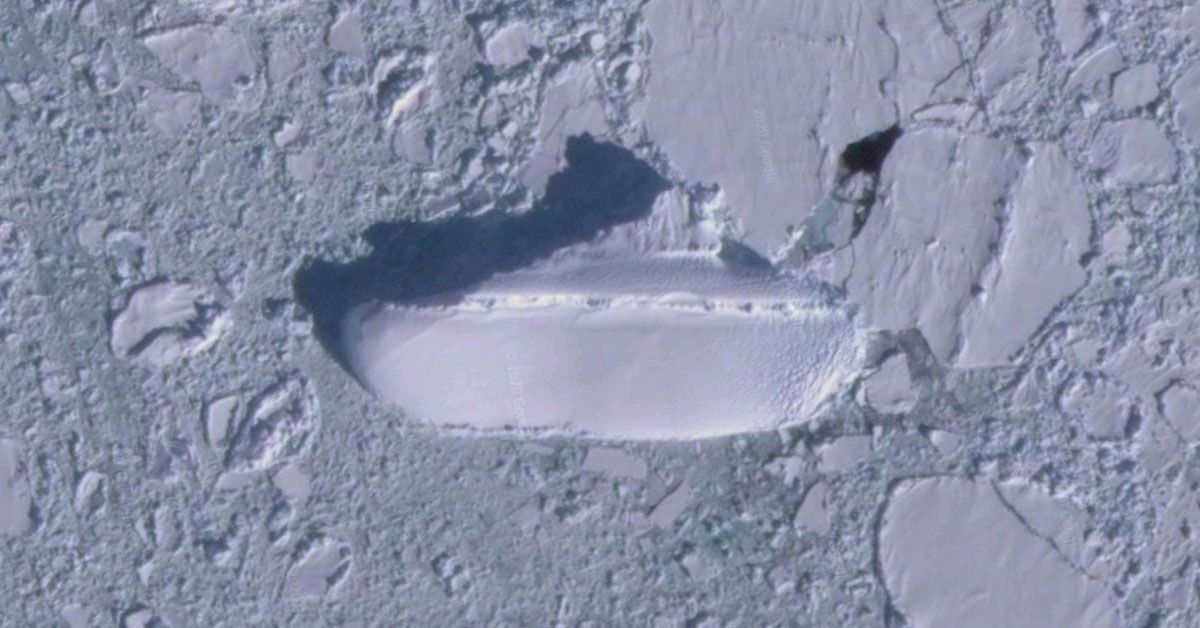 On Aug. 7, 2020, YouTube user MrMBB333 published a video that appeared to show a ship in ice that measured over 400 feet (122 meters) in length. The images were captured from Google Earth. The moment with the "ice ship" begin at the 5:05 mark:

This was sent in by D. Whitaker, this area here. And he noticed this iceberg here, if we go to the 3D format, you look down on it. It looks like the outline of a ship, and this one here measures over 400 feet long. 428 feet (130 meters) to be exact. Whatever that is that looks like a ship. The ice ship, whatever you want to call it, that's what it looks like. A 400-foot yacht just sitting there off the coast of Antarctica, right in this area here just beneath New Zealand and Antarctica, right in that area there about a hundred miles offshore.

This discovery was undoctored. The "ice ship" can be viewed on Google Maps or Google Earth using its satellite view by clicking this link, or by entering these coordinates into Google Maps: 66°54'18"S 163°13'37"E.

Shadows around the shape measured quite long, meaning that it was well above the surface of the rest of the ice. If it was a ship, it was listing on its side. In Google Earth, one shadow stretched 90 feet (27 meters) long: While the video was undoctored, and it certainly looked like the outline of a large ship, we are unable to definitively confirm that it is, indeed, a ship. The "ice ship" story from the video was mostly picked up by tabloids.

The Sun, Mirror Online, and others all detailed conspiracy theories from viewers who commented under the YouTube video. Commenters said that it might have something to do with World War II, Adolf Hitler, aliens, or Nazis. At least one person said it could be a ship that's being built underground for the rich and powerful, for when the Canary Islands gets hit with a massive natural disaster that's purportedly going to take out the east coast of the United States. All of these theories are baseless and unconfirmed.

Even so, ships have gone down in Antarctica in the 21st century. For example, the Canadian cruise ship named MS Explorer sank in 2007. However, its last known location was more than 3,000 miles (8,000 kilometers) from the "ice ship." The purportedly "rat-infested" Lyubov Orlova, a ship that in 2013 was abandoned and adrift in the middle of the ocean, was only 295 feet (90 meters) long, not nearly as long as the "ice ship" shape. The "cannibal rats" aspect of the ship's story didn't hold much water.

Photographer Robin Smith captured this image of the Lyubov Orlova around 2012, before it likely sank in early 2013: Robin Smith published this photograph on Getty Images with a date of Feb. 23, 2012.

Another famous ship, although not tied to Antarctica, was the century-old SS Cotopaxi. It was finally positively identified in early 2020 after being discovered years earlier. The SS Cotopaxi is not the "ice ship" seen on Google Maps.

"Ice ship" or not, the only way to definitively confirm what lies at these Antarctic coordinates is for an expedition to set sail. If that ever happens, we'll be here awaiting the big news.