Have 3D Printed Rhino Horns Been Developed to Stop Poaching? 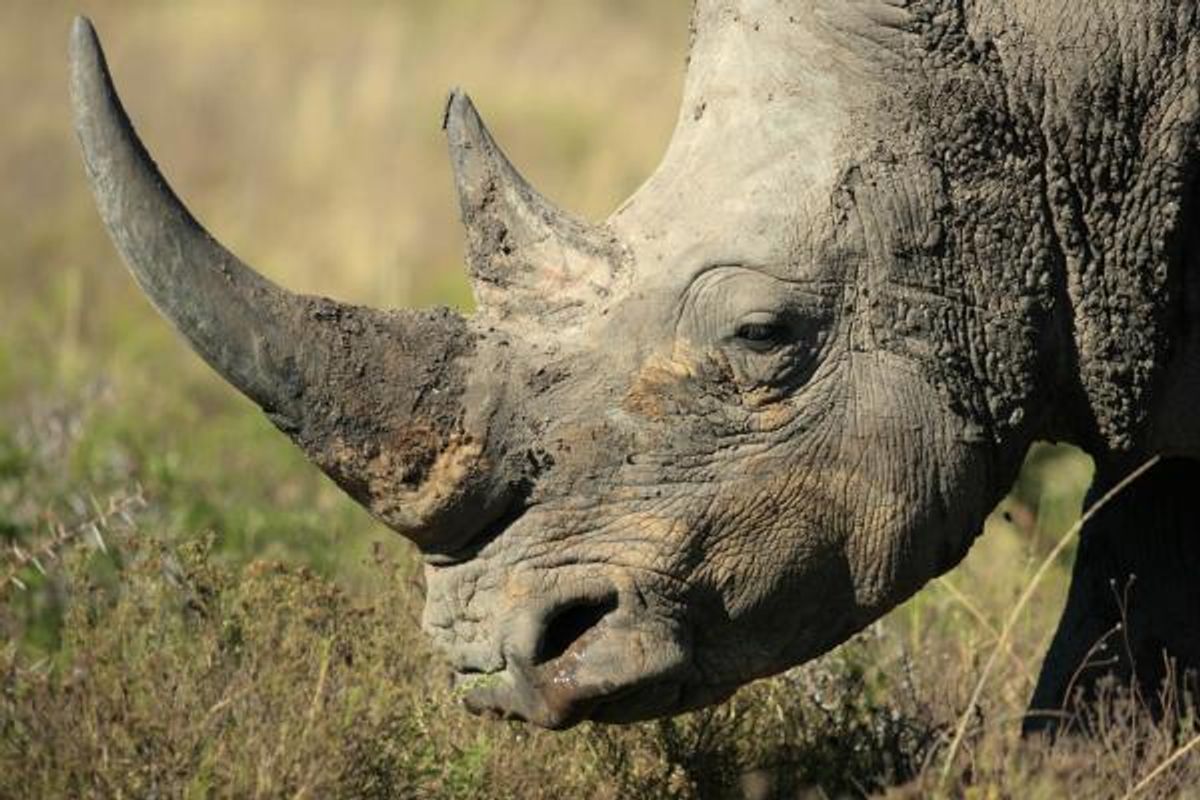 Claim:
A biotech company has developed a 3D synthetic rhino horn that will eventually undercut the market for poached horns.
Rating:

At least four companies have announced intent to manufacture synthetic or fake rhino horn genetically identical to its real counterpart.

Conservation and wildlife groups almost universally rejected the idea, as it's unclear whether producing fake rhino horn will decrease demand for real rhino horn, and it's uncertain whether the synthetic product can be legally sold under extant anti-poaching laws.

On 9 July 2016, the Facebook page "The Medical Facts" published the image and explanation shown below, reporting the development of synthetic rhino horn as an anti-poaching measure:

A biotech startup has managed to 3-D print fake rhino horns that carry the same genetic fingerprint as the actual horn. The company plans to flood Chinese [the] Chinese rhino horn market at one-eighth of the price of the original, undercutting the price poachers can get and forcing them out eventually. The International Rhino Foundation (IRF) and Save the Rhino International (SRI) issued a joint statement after "monitoring the progress of four US-based companies that have announced their intentions — with varying degrees of success — to produce synthetic or bio-fabricated rhino horn, and occasionally also other products including e.g. elephant ivory, lion bones or pangolin scales." In that statement, both groups expressed their opposition to the introduction of fake rhino horn to international markets:

We are opposed to the development, marketing and sale of synthetic rhino horn [because]:

o More than 90% of “rhino horns” in circulation are fake (mostly carved from buffalo horn or wood), but poaching rates continue to rise annually.

o Synthetic horn could give credence to the notion that rhino horn has medicinal value, which is not supported by science.

o The availability of legal synthetic horn could normalise or remove the stigma from buying illegal real horn.

o It will take time to develop synthetic horn and meanwhile the poaching crisis continues.

o How can consumers and law enforcement officials distinguish between legal synthetic horn that looks real, and illegal real horn?

o Companies benefitting from making synthetic horn have shown very little commitment to use their profits to help the core problem of rhino poaching; besides which, those profits would meet only a tiny fraction of the total rhino protection costs that would remain to be met as long as demand reduction campaigns falter, as they would with the marketing of synthetic horn.

A December 2015 National Geographicarticle covered the efforts of one such biotechnology outfit producing synthetic rhino horn (Pembroke) and outlined some conservationist concerns about the unintended consequences of such a venture:

“I frankly don’t see that it’s any better, to be honest,” says Susie Watts, a consultant for WildAid and co-chair of the Species Survival Network Rhino Working Group, referring to Pembient’s move to put faux powder on the back burner. While she’s aware that people buy rhino horn jewelry, Watts has never heard of rhino horn cell phone cases and chopsticks.

But opposition to Pembient’s synthetic horn plans extends beyond the possible new market it could create. “There’s very little, if any, relief on wild populations when we see commercial farming develop or commercial trade of a protected species,” says Douglas Hendrie, manager of the wildlife crime and investigations unit for conservation group Education for Nature - Vietnam. “The wild trade continues right alongside.”

Patrick Bergin, CEO of the African Wildlife Foundation, also believes that inserting fake horn into the market could counteract efforts to educate people about why they shouldn’t buy wild horn, a strategy most activists push as the best way to reduce demand.

There’s also concern that fake horn could increase the workload for law enforcement in countries already struggling to contain the illicit trade. According to Hendrie, Vietnam doesn’t have the enforcement capacity to regulate the black market along with the legal one.

A February 2016 followup article presented a five-point set of objections to the introduction of genetic copies of rhino horn to the market, filed with the U.S. Fish and Wildlife Service by the Center for Biological Diversity:

Experience demonstrates that efforts to 'flood the market' with products produced from protected wildlife—either by producing synthetic alternatives or raising animals in captivity for harvest—often fail to achieve their stated goal. Such efforts often create more demand from consumers, even as products from wild animals and plants continue to command a premium over synthetic or farmed alternatives. ... We also have significant concerns about injecting products into the market that would make it harder for law enforcement to detect poached and trafficked wildlife products, or allow criminals to disguise the source of illegal products by commingling them with these alternatives.

In short, it's true that at least four biotechnology firms have engaged in some form of development of synthetic material genetically identical to rhino horn. Although progress in that area was initially hailed as a potential anti-poaching measure, conservation groups and wildlife officials have since expressed strong skepticism that the overall effects on the rhinoceros population of selling such material wouldn't be deleterious. Members of both groups have espoused positions opposing the introduction of fake rhino horn to any market, citing anticipated demand uptick and burdens on already taxed enforcement agencies.