Were 39 Missing Children Found in a Trailer in Georgia?

Operation Not Forgotten, spearheaded by the U.S. Marshals, resulted in the rescue of dozens of missing and endangered children. 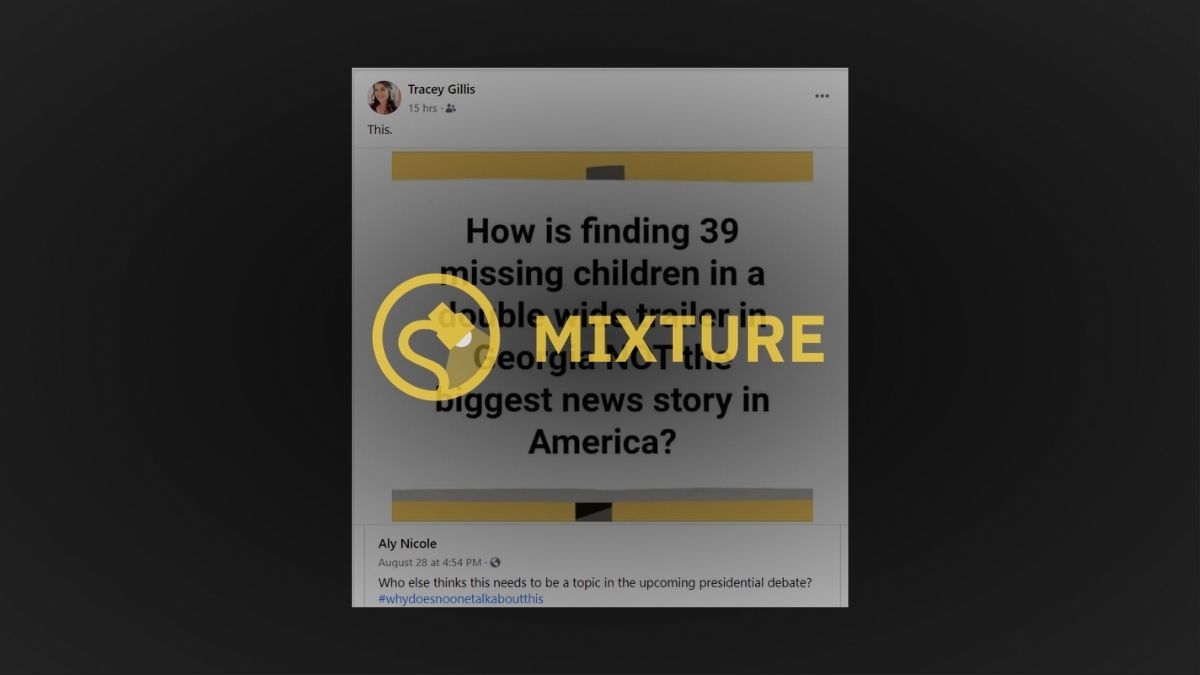 Claim:
Thirty-nine missing children were found in a double-wide trailer in the state of Georgia.
Rating:

The U.S. Marshals Service (USMS) Missing Child Unit said they rescued 26 missing children, and ensured the safe location of 13 others, after a two-week search operation conducted in Georgia.

However, these children were found in various locations, and there is no evidence indicating they were all housed in one trailer.

A two-week effort  to rescue endangered and missing minors led by the U.S. Marshals Service (USMS) Missing Child Unit in August 2020 — nicknamed Operation Not Forgotten — resulted in the recovery of 39 children.

Alongside other federal, state, and local agencies, the USMS said they rescued 26 missing children, and ensured the safe locations of 13 more, while arresting nine individuals in connection with alleged crimes ranging from sex trafficking to parental kidnapping.

The large number of children found during the initiative immediately attracted the attention of internet rumormongers. Snopes readers shared a number of memes with us claiming that the children were all found in one trailer. While the rescue itself indeed took place, according to the USMS, the descriptions of the circumstances around the discovery of the children in these memes were largely untrue.

According to a statement from the USMS, and information provided to us by Josue Rivera, an inspector from USMS involved in the investigation, the two-week operation took place in various counties throughout Georgia, and children were also rescued from Florida, Michigan, South Carolina, Tennessee, Oklahoma, and Kentucky. Since it occurred over a long period of time in more than one location, it is unlikely that all the children could have been found in one trailer. Rivera described at a press conference the locations where the children were found and the arrests of the alleged perpetrators were made, including motels, apartment complexes, and other residences.

The U.S. Marshals’ office described the different circumstances for the missing children:

These missing children were considered to be some of the most at-risk and challenging recovery cases in the area, based on indications of high-risk factors such as victimization of child sex trafficking, child exploitation, sexual abuse, physical abuse, and medical or mental health conditions. Other children were located at the request of law enforcement to ensure their wellbeing. USMS investigators were able to confirm each child’s location in person and assure their safety and welfare.

The missing children ranged in ages from three to 17. We reached out to USMS and learned that fifteen of the children were identified as victims of trafficking. The other children were victims of parental kidnappings, children who absconded from the Division of Family and Children Services (DFACS), Department of Juvenile Justice custody, and were believed to be in danger or critically missing. A majority of the children were runaways who fell into the human trafficking realm.

Investigators said nine people were arrested on warrants that included sex trafficking, registered sex offender violations, possession of drugs and weapons, and custodial interference. A few of the arrests were made in Florida, where one child was also rescued after being found with a parent who had arrest warrants for various sexual offenses. USMS provided us with a list of the nine people arrested and their alleged connections to the crimes:

We should note that the USMS has been accused of exaggerating its success in the past. In 2018, the USMS said they found 123 missing children in an operation in Michigan, while state police said just four of the children were actually missing, and many of them were found with their guardians.

Dave Oney, a USMS spokesperson, told us that these headlines were "misleading." He argued that they had actually "cleared 123 cases," and not rescued all 123 children. Many of the children reported as missing earlier had come back, he said, and the people who reported them had not updated the USMS.

According to the most recently available statistics from the FBI, there were 421,394 reported cases of missing people below the age of 18 in the U.S. in 2019. Out of those, 90 to 91% were considered endangered runaways, according to Donald Washington, director of USMS, and one in six of those endangered runaways were likely to become victims of sex trafficking.

Given that the main source of information we have about the recovery of these missing children in Georgia is from the USMS — an organization that has been accused of misrepresenting numbers in the past — and there is no proof all these children were found in one trailer, we rate this claim a “Mixture.”