Is There a Link Between Major Hurricanes and 29 August?

A viral meme falsely states that four hurricanes hit the United States on 29 August in various years, prompting spurious claims about this "pattern." 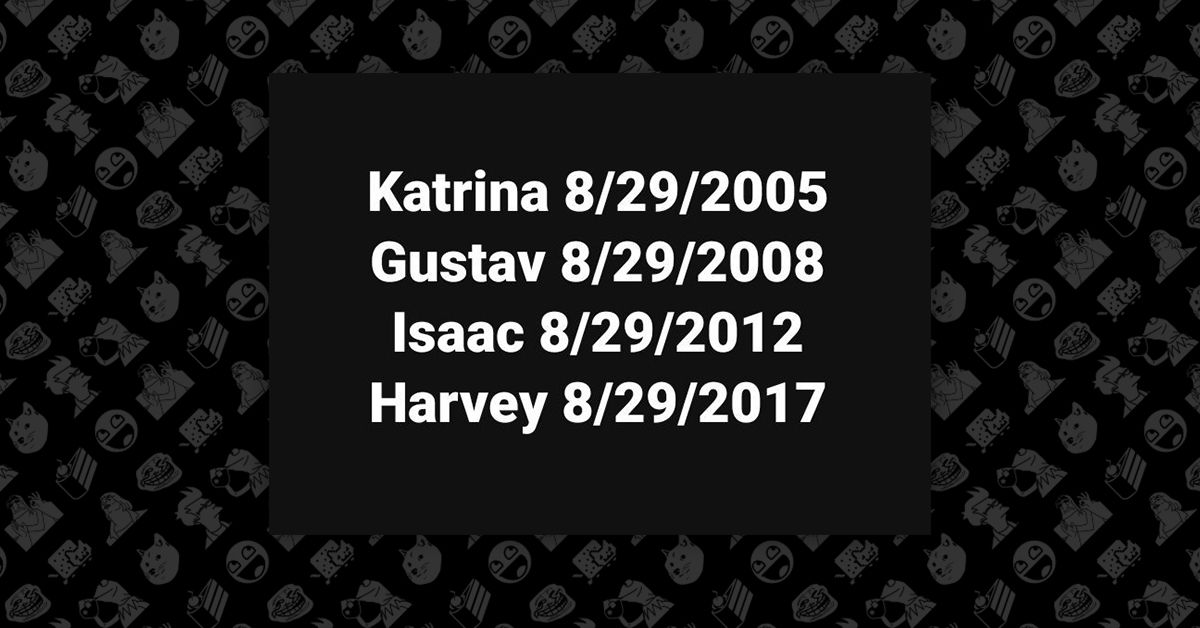 In the days following Hurricane Harvey's devastating impact on the city of Houston and southeastern Texas in August 2017, many Facebook and Twitter users shared what appeared to be a curious pattern: It's not clear what exactly these dates refer to, but they appear to be presented as the dates each hurricane made landfall in the United States. The Big Wobble web site specifically made this claim in a 31 August 2017 article with the headline: "Signs and wonders! Katrina, Gustav, Isaac and Harvey all made landfall on the 29th of August."

The meme does not accurately state the date of first United States landfall for three of the four hurricanes it mentions. Depending on which time zone you use, the fourth date is also inaccurate.

There are a number of other issues with the viral spread of this meme, including: a U.S.-centric focus on the damage done by hurricanes in the United States, while ignoring the devastation they often first cause in the Caribbean; and a spurious search for numerical patterns in the midst of tragedy.

Here are the key dates leading up to landfall for each of the four hurricanes listed in the meme. All dates refer to events timed according to UTC (Coordinated Universal Time), which is four hours ahead of Eastern time, five ahead of Central time, seven ahead of Pacific time:

So if we're looking at the first United States landfall of these four hurricanes, here's how the meme should look: If we follow Coordinated Universal Time (UTC), only one of these four hurricanes made its first United States landfall on 29 August (Isaac in 2012).

Hurricanes are not one-off events that take place on a single date. They are phenomena that evolve, develop, strengthen and weaken, moving over and making landfall at various geographic locations over the course of days and weeks. That makes it easy to cherry pick dates to form a "pattern."

The search for patterns

It's not clear whether those posting and sharing the "8/29" meme are simply pointing out a curious coincidence (even though, as we've shown, the dates are wrong), or suggesting that there is some conspiracy (supernatural or man-made) behind them.

Let's imagine all these hurricanes did make their first United States landfall on 29 August. What would that mean?

Firstly, it would not necessarily be particularly strange. Late August and early September is peak hurricane season in the Atlantic. While all four highlighted hurricanes did not make their first U.S. landfall on the same date, they did each occur within the same eight-day period, between 25 August and 1 September.

Secondly, it would not be an example of government geoengineering or climate engineering. Conspiracy theorists have already claimed that Hurricane Harvey is "the latest example of covert weather warfare being waged on completely unsuspecting populations...orchestrated and manipulated by an ever more desperate and aggressive global power structure."

And some have claimed that the "8/29" date pattern in the meme is a clear sign of sinister government orchestration. Setting aside the fact that the dates are wrong, it is unclear why the U.S. government would choose to schedule the United States landfall of four hurricanes for the same calendar date across 12 years, or how this would even be possible. If the supposed purpose of climate engineering is to wage "weather warfare" against "unsuspecting populations," why would the purported conspirators continuously choose the same date?

There is a pattern behind the dates of these four hurricanes - they all made their first United States landfall within an eight-day period, in different years. But this has a very simple and boring explanation: 25 August-1 September is part of peak hurricane season in the Atlantic.

Any interpretation of hurricane dates that goes beyond this is entirely spurious, requiring as it does ludicrous government conspiracy theories or supernatural predetermination. However, the desire to find numerical patterns and explanations in the midst of terrible human tragedy, such as that brought by Hurricane Harvey, is a very understandable one.

We saw similar spurious memes about the dates of terrorist attacks in the aftermath of the 22nd May 2017 suicide bombing at an arena in Manchester, England. Faced with the horror of dozens of children being slaughtered at a pop concert, many found comfort or distraction in pointing out a supposed pattern of terrorist attacks on the 22nd day of various months. In reality, a terrorist attack is no more likely to happen on the 22nd than any other day of the month.