Did a 1930s Cartoon Warn of Vaccine Misinformation?

A remarkably prescient cartoon, dating back almost a century, resurfaced in 2021, as COVID-19 vaccination efforts intensified. 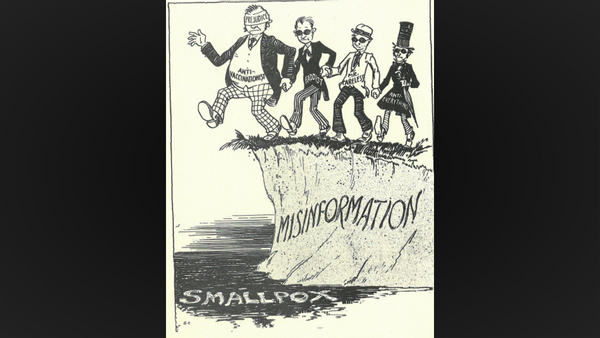 Image Via Courtesy of the American Public Health Association.

Claim:
A cartoon satirizing opponents of vaccines was originally published in the 1930s.
Rating:

In May 2021, as increasing numbers of people living in the United States and around the world received COVID-19 vaccinations, misinformation about vaccines became more prevalent, especially on social media.

Some observers pointed to an air of familiarity about many of the most commonly held misconceptions and conspiracy theories about vaccines in general, and the COVID-19 vaccine in particular, and social media users enthusiastically shared what was presented as a near-century old cartoon that presciently satirized such unfounded claims. The cartoon was in the context of earlier efforts to eradicate the smallpox virus.

For example, on May 2, Padraic Judge posted a widely shared tweet that contained a cartoon showing various archetypes of vaccine objectors: "Anti-vaccinationist" (wearing a blindfold labelled "prejudice"); "Mr. Careless"; "Anti-Everything"; and "Faddist" — a largely archaic word that describes people who turn to alternative or niche health trends, especially diets, in a way that neglects or contradicts mainstream scientific advice.

These men are shown walking off a cliff labelled "Misinformation," into a sea labelled "Smallpox." Judge added: "Comic made in the 1930s. History repeats over and over."

The London Independent used Judge's tweet as the basis for an article with the headline "A comic from the 1930s mocking anti-vaxxers predicted the future."

Those posts were accurate. The cartoon is authentic and really was first published in the 1930s, and we are therefore issuing a rating of "True."

As explained in a 2012 post on the now-defunct comic book history blog Super I.T.C.H., the "misinformation cliff" cartoon was first published in a 1930 booklet entitled "Health in Pictures."

Further digging suggested that that booklet was published by the American Public Health Association (APHA), so Snopes contacted the APHA and obtained several scanned pages of an original copy of "Health in Pictures," currently stored in the organization's archives.

Those pages can be viewed here, and a copy of the "misinformation cliff" cartoon, scanned from its original source, can be viewed below: The APHA told Snopes that information on the creator of that particular cartoon was not available.

Although the smallpox vaccine was first developed in the 19th century, and the disease was eradicated in 1980, for many years its distribution and use was a subject of controversy. Those who objected to the vaccine often used rhetorical strategies that would later be seen again in the context of COVID-19, as Paula Larson from the University of Oxford's Center for the History of Science, Medicine and Technology has written.

Correction [May 13, 2021]: It was Padraic Judge, not Padraic Joyce, who tweeted the cartoon. We have corrected the error.