Is This the 1898 Oklahoma Tornado?

A centuries-old photograph purportedly showing a tornado in Oklahoma is actually an early example of composite photography. 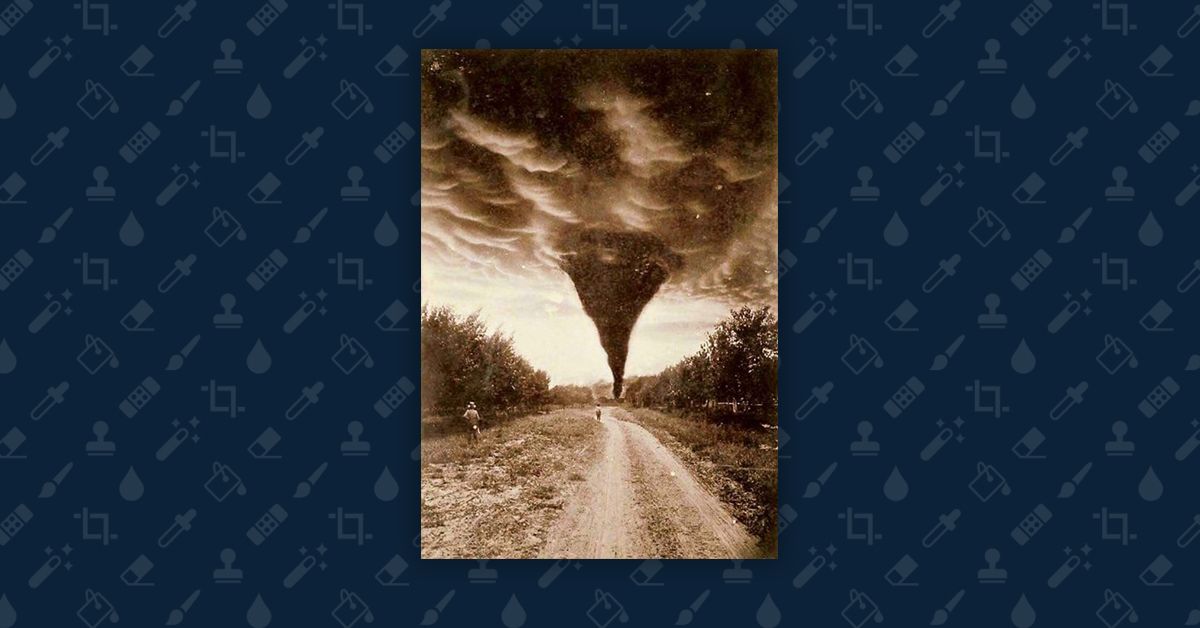 Claim:
A photograph shows two men standing on a road in front of a tornado in Oklahoma in 1898.
Rating:

In May 1898, a tornado touched down in Waynoka, Oklahoma. At the time, a photograph purportedly showing two men on a road watching the twister was published in contemporary newspapers such as Philadelphia Press.

Many years later, the image reappeared and made the usual viral rounds on social media, now bearing claims that it was one of the first photographs ever taken of a tornado: The story behind this image actually starts with yet another photograph. A man (only identified as a "Mr. Connor") sent the Monthly Weather Review an image purportedly showing the tornado. The editors of the weather journal, who were growing accustomed to fans sending in photographic fakes, were skeptical about the authenticity of the image and decided to file it away rather than publish it: We have watched with interest and curiosity the efforts of some manipulators of the camera to reproduce the phenomena of nature in all her varying moods. There can be no particular fault found with the enterprise of the photographer, be he amateur or professional, who sallies forth at high noon, or soon thereafter, and under the friendly shadow of an accommodating cloud makes moonlight views by the score. We confess, too, that we can pass into the waste basket without hesitation the many poor attempts to fabricate the funnel cloud of a tornado. We received one such not very long ago from Mr. Connor. It was better than the average, and instead of going into the trash basket it went into a convenient drawer.

The Monthly Weather Review received another curious photograph shortly after a tornado hit Kirksville, Missouri on 27 April 1899, this one from a "Mr. Gosewisch". Although this photograph featured two men on a road and was attached to a different date and location, it featured the same twister:

Now we are glad that we kept it, for along comes a photograph kindly sent us by Mr. Gosewisch, of the tornado cloud that brought death and destruction to so many homes in Kirksville, Mo., on April 27, 1899. We thought we had seen that tornado cloud before, and the more we looked at it the more certain we were that we had met an old friend. When we first saw it our funnel cloud was stirring up the dust and incidentally frightening the inhabitants of Waynoka, in far-off Oklahoma, and this was more than a.year ago. The scene has now changed to a quiet road in Missouri across which our Oklahoma tornado cloud appears to be crossing, while a couple of artistic Rubens watch its progress in wonder and amazement.

The job is well done. There is no particular fault to be found either with the conception or the execution, but it pains us to think that people will take such liberties with the business end of a tornado. Only to think, “It was taken at 100 yards.” We sincerely hope that the pioneer who “took it at 100 yards” will some day meet a real robust tornado.

The images — as stated by the Monthly Weather Review — are composites, originally created by photographer North Losey. Losey was a frontier photographer who captured images of Native Americans, presidents, and daily life throughout the Midwest.

Losey held various photography patents, and ended up gaining some notoriety in the early 1800s for superimposing tornadoes into various rural settings. We found several similar images (most likely created by Losey) via the American Museum of Natural History and the Library of Congress: (We flipped the photograph shown in the top left in this image to better match the position of the other twisters.)

While it is clear that many of these images are composites, as they all feature identical funnels supposedly taken at different times and locations, were they all based on a photograph of a real tornado? The Library of Congress examined a scan of "Oklahoma Cyclone (no.2)" — pictured at the bottom right — and told us that the tornado appeared edited or possibly faked:

The scan we have online was made quite some time ago from a copy negative so the quality isn't as good as current scans. Looking at the actual photo here, it appears there was some editing done where the tornado touches the cloud. There's also a line towards the top of the photo which could be the edge of the glass if he faked it. I can't say for certain it was faked, but I would believe it someone else had proof.

A.J. Henry of the Weather Bureau proposed two theories in a 1 May 1899 article (with the pointed title "Spurious Tornado Photographs") about the authenticity of the photographs. The first dealt with the bulbous clouds, which Henry believed to be genuine, although taken from a less ominous event (such as a sunset). The second theory dealt with the twister itself, which Henry believed was hand-drawn onto a piece of glass that was then placed over a landscape negative and photographed:

It is possible that the Waynoka picture was made by superposing a tornadic funnel upon a beautiful photograph of sunset clouds and landscape. The Kirksville picture retains the funnel and clouds of the Waynoka picture, but substitutes a view of a road and its Osage hedges, such as might occur in Missouri. But where did the original funnel come from? It is evidently not a photograph from nature of a genuine tornado funnel. It has every appearance of having been drawn in india ink on glass and then photographed by printing upon the landscape negative. The retouching of original negatives so as to convert a portrait from nature into a beautiful work of art is carried on in great perfection by modern artists, but any application of this art to photographs that are to be used for scientific purposes does more harm than good.

Professor Henry ended the piece with a piece of prescient wisdom:

We shall doubtless see the Waynoka clouds and funnel reproduced again, at no distant date, in connection with some other dreadful disaster. The argument seems to be: "If there was a disaster, it must have been a tornado; if a tornado, it must have had a funnel; if a funnel, there must be a picture; this is a photograph, therefore it will do."

The Monthly Weather Journal could not have been more right, as evidenced by a plethora of fake or miscaptioned photographs of water spouts, hurricanes, storm clouds, and, of course, tornadoes.

Although many of today's hoaxes are created in an effort to do nothing more than deceive, that may not have been North Losey's goal. Relatively few people had witnessed an actual tornado in the late 1800s, and those who had not had to rely largely on sketches or textual descriptions of what they were like. Photographers at the time were not equipped to capture clear images of these extreme storms, and so they often augmented their photographs to make the story they told more appealing to the public:

In the late 1800s, meteorology was still in its infancy. In 1883, the government had banned the word "tornado" from official forecasts because they were concerned the word would cause widespread panic.

Historically, the only extreme weather images were from eyewitness sketches. Very few Americans had actually seen a tornado until the 1880s, when photographers released the earliest known tornado photographs. Photographic evidence provided experts with valuable insight and proved fascinating to a public more familiar with legend than science.

"In the last couple of years, with the proliferation of cameras, it just became easier to go out after a storm," Mark Fox, a meteorologist for the National Weather Service told the Huffington Post.

In the late 1800s, early photographers relied on cumbersome box cameras, with exposure times ranging from two to ten minutes or more, to capture tornadoes. The first two known photographs of twisters emerged in 1884 — one in South Dakota and another in Kansas.

According to the New York Times, the following image is often considered the first photograph of a tornado. It was retouched and then sold as a postcard: