An interesting legal claim stirred up plenty of debate on TikTok in December 2020. 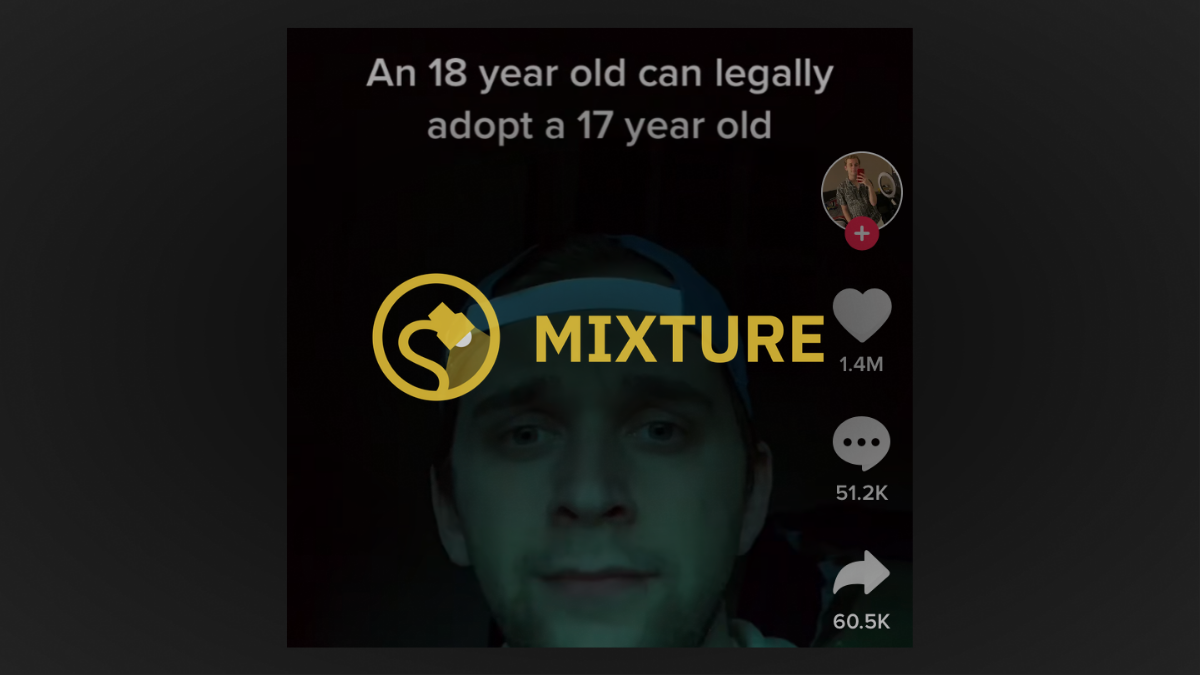 Most U.S. states do not prohibit an arrangement where, all other things being equal, an 18-year-old attempts to adopt a 17-year-old.

Some U.S. states (in total, representing around a quarter of the country's population) do have laws and regulations that prohibit such an adoption arrangement. Furthermore, in practice, most adoption agencies have stringent policies that would, in most circumstances, mean an 18-year-old is not the most preferable would-be adoptive parent for a 17-year-old.

In December 2020, TikTok user @philupmecup posted a short clip, viewed more than 1 million times, that included the text "An 18 year old can legally adopt a 17 year old," along with the caption "Let that sink in": Among the tens of thousands of comments posted in response to the video were some that appeared to come from teenagers excited or amused by the prospect of high school friends adopting one another once one of them turns 18.

In reality, the restrictions and protocols implemented by adoption agencies make it unlikely that one teenager could adopt another one, except in rare and tragic circumstances. However, on a purely legal, hypothetical basis, most U.S. states do not prohibit such an arrangement. As a result, we are issuing a rating of "Mixture."

Adoption regulations vary from country to country, but the TikTok user who posted the claim lives in the United States, so our assessment will focus on the legal status quo there, which also varies between states.

According to a January 2020 report published by the U.S. Department of Health and Human Services, Colorado, Delaware, Oklahoma, and American Samoa explicitly prohibit adoption by anyone under 21 years old; and Georgia and Idaho set the minimum age at 25.

In seven states (California, Georgia, Nevada, New Jersey, South Dakota, and Utah) as well as the Northern Mariana Islands, the adopting parent must be at least 10 years older than the adoptive child, while in Puerto Rico that minimum age gap is 14 years, and in Idaho, it is 15 years.

In California, an exception exists to the age-gap requirement, namely where a court rules the adoption is in everyone's best interests and is done by a "stepparent, or by a sister, brother, aunt, uncle, or first cousin and, if that person is married, by that person and that person's spouse."

Similarly, Colorado law allows for an exception to the minimum age of 21, subject to court approval, and in South Dakota, the 10-year age gap can be waived where "the court finds the adoption of the child by the adult person in the best interest of the child."

This means that only 10 out of the 50 states, whose combined population represents 79 million (or around 24% of the country's total population) legally prohibit an 18-year-old from adopting a 17-year-old — and in three of those states, loopholes exist which could, in principle, allow such an arrangement.

That's not to say that any 18-year-old could adopt any 17-year-old. Almost all states have some other legal prerequisites for adoption — in-state residency requirements, consent requirements, and the termination of the biological parents' parental rights. But — all other things being equal — only 10 states have age-specific limitations that would (in almost all cases) prohibit the arrangement in question.

In practice, adoption agencies typically impose restrictions, or give preference to certain would-be adoptive parents, based on considerations such as financial stability. This alone would likely rule out the vast majority of 18-year-olds, who are only very rarely independently wealthy or have reliable, sustainable employment which they can balance with a college education and so on.

Another highly relevant consideration here is the time it can take to complete the rigorous procedures required for adopting a child. The California Department of Social Services, for example, advises that adoption agencies often taken between six months and one year to complete their assessment of would-be adoptive parents, and they typically take an additional "one to several months" to actually place the adoptive children with their new parents. Given these time frames, very few scenarios would warrant an 18-year-old's adopting a 17-year-old, when the 17-year-old will become a legal adult anyway, in at most 12 months.