Were 10,000 Camels Scheduled to Be Killed in Australia Amid Water Shortages?

Multiple websites and social media memes lamented a population-control strategy announced by authorities in South Australia amid drought and extreme heat in January 2020. 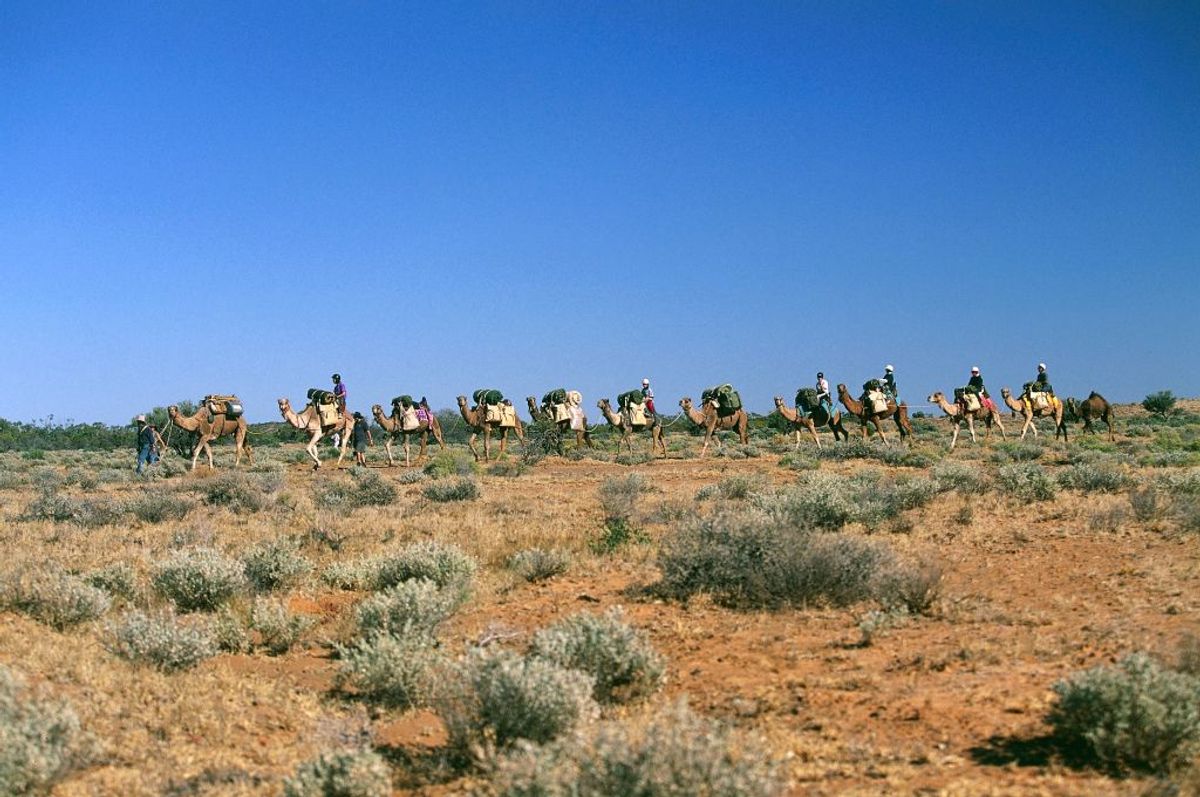 Claim:
In January 2020, officials in the state of South Australia announced a plan to cull around 10,000 feral camels in response to concerns over public safety and environmental resources.
Rating:

In January 2020, readers asked us about the accuracy of reports that authorities in Australia had announced their intention to cull (kill) around 10,000 camels due to the pressure the animals were placing on drinking water supplies.

For example, on Jan. 7, the Weird World Facebook page posted a widely shared meme that contained the following text: Also on Jan. 7, the London Evening Standard published a story with a headline similar to that contained in the meme: "Over 10,000 Australian Camels to Be Shot Because They Drink Too Much Water." The article reported that:

"Over 10,000 camels will be shot from helicopters to stop them drinking water in drought ravaged South Australia. Professional shooters will move in on Wednesday, after orders from Aboriginal leaders in the Anangu Pitjantjatjara Yankunytjatjara lands (AYP). The culling, expected to take about five days, follows complaints from locals about animals looking for any available water source, including tanks and taps in properties."

Similar stories, with similar headlines, were published by the Independent, the Daily Mail, and IndiaTimes.com. Those reports, and the Weird World meme, were broadly accurate, though the specific claim that "more than" 10,000 camels would be culled as part of the plan appears to have been contradicted by a local official who said the number would be between 5,000 and 10,000. They also failed to mention that a small number of wild horses would be targeted in the kill, as well.

The APY local government authority, in the state of South Australia, announced the cull in a Jan. 6 news release that read, in part "There will be a feral animal kill across the APY lands. Feral animals, but specifically camels, are the primary target ... The cull (kill) will occur the week of 8th January, 2020, when the aerial operations will commence (expected to go over five days)."

In a supplementary news release published the following day, APY officials explained the reasoning behind the cull:

The region's first major cull of feral animals is in urgent response to threats posed to communities by an increase in the number of feral camels, and some feral horses, due to drought and extreme heat. Thousands of feral camels are emerging from an arid landscape and moving into communities looking for water, while doing significant damage to infrastructure and housing, and creating serious safety hazards.

Traditional owners, who have been widely consulted about the cull, have reported extremely large groups of camels and other feral animals in and around communities and in specific hot spots across the APY Lands. The APY Executive Board of Management held an urgent meeting on December 11 about the impact of feral animals on communities and pastoral operations, and approved a resolution for an aerial cull of camels and other feral animals across the APY Lands.

... Richard King, APY's general manager, said traditional owners recognized the need to manage feral owners, despite a camel cull presenting a spiritual conflict for some indigenous groups, because of serious risks to community safety and damage to important economic, natural and cultural assets. "There is extreme pressure on remote Aboriginal communities in the APY Lands and their pastoral operations as the camels search for water," Mr. King said.

"The dire situation is compounded by dry conditions, animal welfare issues, threats to communities, scarce water supplies, health and environmental impacts, the destruction of country, loss of food supplies and endangerment of travellers on the Stuart Highway and across the APY Lands. Given ongoing dry conditions and the large camel congregations threatening all of the main APY communities and infrastructure, immediate camel control is needed."

Separately, APY's General Manager Richard King told CBS News that the number of camels being targeted in the cull was between 5,000 and 10,000 — a range that somewhat contradicts the claim, repeated in several news articles, that "more than" or "over" 10,000 camels were to be killed. If the number ends up being 10,000, those reports will transpire to be rather accurate. However, according to King, the number could be as low as half of that figure, a detail noted by none of the articles or the meme mentioned above.

Hennessey, Ted.  "Over 10,000 Australian Camels to Be Shot From Helicopters Because They Drink Too Much Water."   The Evening Standard.  7 January 2020.

Anangu Pitjantjatjara Yankunytjatjara Local Authority.  "Media Statement -- There Will Be a Feral Animal Kill Across the APY Lands."   6 January 2020.