Rumor: A $100 Target coupon circulated via Facebook is real.

Claim:   A $100 Target coupon circulated via Facebook is real.

I saw a notice on facebook that when you click, you receive a
$100 coupon for Target, when you purchase $100 or more on groceries. I
can't find any info on this, but later saw a post that said NBC news said
this is a hoax. Now I can't find that post! Is this real or a hoax?
nothing noted on Target site. Thanks! 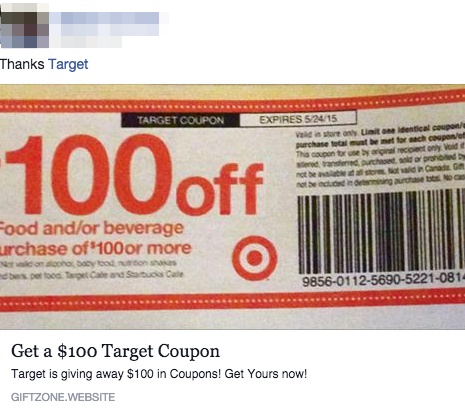 Origins:   In February 2015, a survey scam began to circulate on Facebook promising users

a tantalizing $100 Target coupon in exchange for clicking a link, liking, and sharing it. According to the image and link, the coupon was applicable to any purchase of $100 or more on groceries at any Target location.

The $100 Target coupon scam was not the first clickjack or survey scam aimed at Target. But unlike the gift card scams that circulated before it, the "coupon" element of the ruse worked to allay concerns of the offer's being too good to be true. (However, the relative high dollar value of the coupon and lack of restrictions on its use essentially promised value identical to that of a gift card scam.)

Facebook fans of Target posted to the retailer's wall to inquire about the coupon or thank the chain for offering such a generous deal. Target's official Facebook account published responses to many of the replies warning consumers that the offer was not legitimate, that the coupon did not originate from Target, and that its originators were likely seeking users' personal information:

That isn't a valid Target promotion and is most likely an attempt to gather your personal information. Please don't click any links or provide any info. Thanks so much for taking the time to let us know! Have a great day! — Philip

Moreover, cursory closer examination of the purported $100 Target coupon revealed that portions of the image (particularly where the dollar amount appeared) had been doctored.